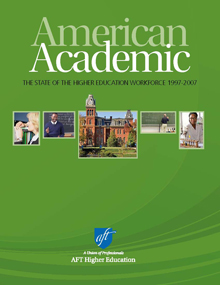 The primary finding of a report released last week by the American Federation of Teachers (AFT), entitled American Academic: The State of the Higher Education Workforce 1997–2007, presents a troubling picture of disinvestment in the higher-education teaching profession—notably, a reduction in the proportion of full-time tenured and tenure-track faculty, and an increased reliance on employing “contingent” faculty and instructors such as part-time faculty, full-time nontenure track faculty, and graduate employees.

An analysis of the most recent ten years of national data finds that the higher-education instructional workforce grew in the past decade, which is not surprising since college enrollments increased during that time by over 3 million. But to meet the needs of a growing student population, colleges and universities overwhelmingly relied on hiring undersupported contingent faculty and instructors. Previous reports have demonstrated the problems created when colleges hire contingent faculty and instructors without fair wages, job security, and professional support. This new report documents that, rather than working to reverse these trends and investing in a more secure higher-education teaching workforce, colleges and universities are expanding their reliance on contingent faculty and instructors.

Among the report’s other key findings:

At the same time, the study notes an increase in the number of professional staff who provide direct student services, such as registrars, counselors, and financial-aid officers. Professional staff grew by 50 percent from 1997 to 2007, and the vast majority of these positions were full-time.

The Chronicle of Higher Education and Insider Higher Ed have reported on the report, with extensive comments by readers posted to the latter article.

CAA encourages all colleges and universities to read and uphold its Guidelines for Part-Time Professional Employment, which give recommendations on fair compensation, office and studio space, benefits, and more for part-time workers.