In commemoration of the three hundredth anniversary of the death of the German-born illustrator and naturalist Maria Sibylla Merian, the Kupferstichkabinett in Berlin (April 7–July 2, 2017) and Städel Museum in Frankfurt (October 11–January 14, 2018) are sponsoring a joint show of approximately 150 of her works on paper and vellum. Known for her exquisite depictions of flowers and insects, Merian had an international reputation in her lifetime. Her illustrated texts include a volume of engravings of flora and fauna she produced while on a scientific expedition to the Dutch colony of Surinam in 1699. As a complement to this exhibition, the University of Amsterdam is sponsoring an academic conference titled “Changing the Nature of Art and Science: Intersections with Maria Sibylla Merian” (June 7–9, 2017), where her contributions to the history of printmaking, natural history, and botanical art will be honored. 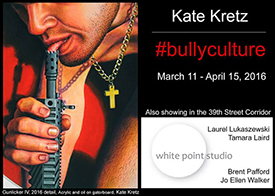 #bullyculture represents the first phase of an ambitious in-progress series that Kate Kretz commenced in 2011 and will conclude later this year. In her quest to find the common denominator to all the crimes against women, children, “minorities,” animals, and the earth, she has produced a large corpus of works on paper, sculpture, paintings, textiles, and mixed media. Some of the themes she explores in this series include “trophy hunting, VIP culture and ‘the 1%’, corporate destruction of the earth, rape culture and sexual entitlement, the fetishization of guns and their use for intimidation.” The artist, who has received numerous awards and grants, including the Southeastern College Art Conference’s 2016 award for Outstanding Artistic Achievement and a position on the Fulbright Specialist Roster through 2021, will be giving a lecture on April 1.

A little over fifteen years ago, and one week after 9/11, Shagha Ariannia and her family arrived to Los Angeles as migrants from Iran. Ariannia has mined this particularly potent history of travel, place-finding, and identity-in-transit throughout her artistic career by, for example, annotating her family’s photographic archives in a series called What would America/Iran do without Iran/America? (2012). This solo exhibition focuses on a series of works Ariannia has been creating using national anthems from various countries (Iran and the United States included, among many others). In this way she takes seriously the titular question posed by Gayatri Spivak and Judith Butler in their 2007 dialogue Who Sings the Nation-State? As Butler says in that text, in regard to hearing the US national anthem sung in Spanish in the streets of Los Angeles, “The monolingual requirement of the nation surely surfaces in the refusal to hear the anthem sung in Spanish, but it does not make the anthem any less sing-able in that or any other language” (60).

A few years ago I recall seeing a dozen or so clickbait-y articles written about Nina Katchadourian’s Lavatory Self-Portraits in the Flemish Style, a series in which the artist constructed toilet-paper and neck-pillow costumes during long-haul flights and photographed herself wearing them in the tiny, and poorly lit, spaces of onboard lavatories. This midcareer survey—the artist’s first touring museum exhibition—promises to flesh out Katchadourian’s wide-ranging work. The Flemish lavatory portraits, for example, are only one piece of a larger series of works using the airplane as studio space (Seat Assignment, 2010–ongoing). One of the works on display, and one of her most well-known, is the video Accent Elimination, wherein the artist hired a speech coach to teach her parents (both foreign born) to speak in a “standard” American accent, and, in turn, to teach her how to speak with her parents’ accent. Her collaborations with her family, other artists, international agencies, and even animals are potent reminders that the activity of art is almost never a solitary endeavor, and her interest in quotidian acts of creativity suggests that art can be found anywhere. One just has to know how to look.

May Stevens, a celebrated activist committed to the civil rights, antiwar, and feminist movements, used painting to combat social injustice and to revise women’s history throughout her seventy-year career. The exhibition Alice in the Garden comprises several large-scale paintings depicting Alice Dick Stevens, her elderly mother, during the final years of her life.

From 1983 and 1990, Stevens turned her attention to her mother and producing the five-panel painting Alice in the Garden (1988–89). “The mural-like images confront the viewer with the massive figure of Alice—fleshy, fragile, and vulnerable. In her hands, Alice manipulates flowers—dandelions Stevens had playfully thrown at her during an afternoon visit.”

In a conversation with the art historian Patricia Hills, Stevens explained the importance of Alice as a subject: “For me I think it means I want her [Alice] to be known, even for the individual person that she is, but it also means that I want people like that not to be forgotten. For me she’s not just a single person, because we all know this person. We all know her and we may become her. She’s a problem. As aging is a problem, as illness is a problem, as being a woman who does not fulfill herself is a problem.” (Patricia Hills, May Stevens [San Francisco: Pomegranate, 2005], 45.)

Today May Stevens, now 92, lives with Alzheimer’s disease in a memory-loss facility in New Mexico. She has received numerous awards including ten MacDowell Colony residencies, the Women’s Caucus for Art Lifetime Achievement Award (1990), a Guggenheim fellowship in painting (1986), a National Endowment for the Arts Fellowship in painting (1983), an Andy Warhol Foundation residency (2001), and CAA’s own Distinguished Artist Award for Lifetime Achievement (2001).

Terrains of the Body: Photography from the National Museum of Women in the Arts
Whitechapel Gallery
77-82 Whitechapel High St, London
January 18–April 16, 2017

Featuring over seventeen contemporary artists working across mediums, Terrains of the Body: Photography from the National Museum of Women in the Arts assembles an impressive collection from Washington, DC, for display across the water in London. “By turning their camera to women, including themselves, these artists embrace the female body as a vital medium for storytelling, expressing identity and reflecting individual and collective experience.”