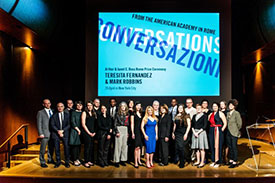 The American Academy in Rome has announced the recipients of its 2017–18 fellowships. The following CAA members are among the newest group of talented artists, scholars, writers, and composers chosen by the academy.

For over a century, the American Academy in Rome has awarded the Rome Prize to support innovative and cross-disciplinary work in the arts and humanities. Rome Prize fellowships include a stipend, room and board, and an individual work space at the institute’s eleven-acre campus in Rome.