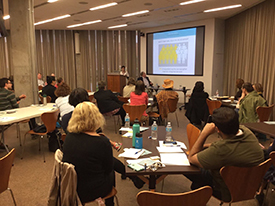 A scene from the fair-use workshop at the UCLA Library (photograph by Sharon E. Farb)

On May 5, 2017, CAA hosted “Fair Use and the Visual Arts,” a presentation and panel discussion at the UCLA Library. The event was made possible by a grant from the Andrew W. Mellon Foundation. Speakers on the panel included Peter Jaszi, the lead investigator on the CAA Code of Best Practices in Fair Use in the Visual Arts and Professor at American University Washington College of Law in the Program on Information Justice and Intellectual Property, and Janet Landay, Program Manager of the Fair Use Initiative at CAA. The pair, who have given presentations across the U.S. and internationally as part of the CAA Fair Use Initiative, talked about why it was important for CAA to undertake the project, their methodology, and the resulting Code of Best Practices in Fair Use for the Visual Arts.

The second half of the event was devoted to a Q&A with the audience of approximately fifty-five people. Question topics ranged from addressing the issue of how the size at which an illustration is produced impacts fair use to indicating in a caption or illustration credits section that I am claiming fair use in the reproduction of an illustration.

A second discussion on CAA’s Fair Use Initiative took place at the American Alliance of Museum’s 2017 Annual Meeting and MuseumExpo in Saint Louis, Missouri. The panel discussion, titled “Copyrighted Material in the Museum: A Path to Fair Use,” took place on May 9. The panel brought together esteemed colleagues from the museum and publishing worlds and was comprised of Patricia Fidler, publisher of art and architecture at Yale University Press; Anne Collins Goodyear, codirector of the Bowdoin College Museum of Art; Judy Metro, editor in chief for the National Gallery of Art; and Joseph Newland, director of publishing for the Menil Collection. Hunter O’Hanian, CAA executive director, was the chair and moderator. 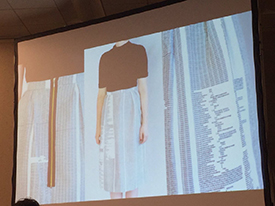 About seventy-five to one hundred people attended the standing-room only session and discussion revolved around fair-use issues for museums who want to use their own materials: catalogues, brochures, websites—even wall texts. A key takeaway from the session: museum representatives need to maintain good relations with donor and lenders, and getting approval from their own legal counsel, who tend to approach these matters with caution.

Later in the day Hunter O’Hanian spoke to faculty and students in the Department of Art History and Archaeology at Washington University in Saint Louis.