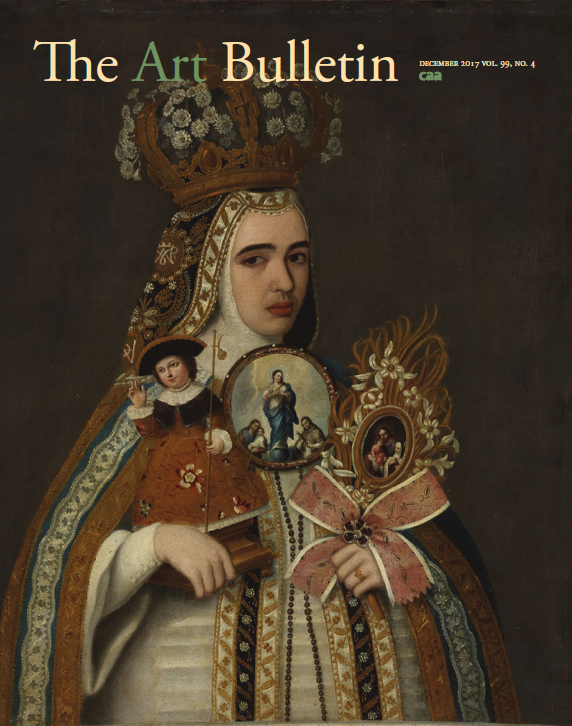 The portrait of a lavishly dressed young nun, an example of a genre of the “crowned nun,” appears on the cover of the December 2017 issue of The Art Bulletin. Baroque in several senses of the word, the painting by José de Alcíbar dates from ca. 1795 and appears in Cristina Cruz González’s essay “Beyond the Bride of Christ: The Crucified Abbess in Mexico and Spain.”

In other essays featured in the issue: Jenifer Neils assesses the Apollo Sauroktonos, the bronze statue of a boy killing a lizard, traditionally attributed to the fourth-century BCE sculptor Praxiteles, and concludes that the work is neither by Praxiteles nor of the mid-fourth century. Alice Isabella Sullivan relates the miraculous deliverance of Constantinople depicted in sixteenth-century Moldavian church murals to contemporary struggles over Ottoman rule in Eastern Europe. Jessica Maratsos examines the artistic tokens of friendship exchanged between Michelangelo and his patron Vittoria Colonna, and the dissemination of copies of these works in paint, manuscript, and print. Jennifer Van Horn considers the iconoclasm of enslaved and newly freed men and women during the American Civil War, who defaced and repurposed portraits of their former masters as a means of resisting dehumanization and asserting their own agency. Harmon Siegel finds that the interiors of Louise Nevelson’s homes, filled with dark sculptures and assemblages, borrow a page from gothic literature, critiquing domesticity as a trap and troubling the stability of modernist claims to autonomy.

The reviews section, on the theme of “Architectural Networks,” features recent books on the architecture of the Roman world, medieval Spain, Japan, the Caribbean, and the contemporary mosque.

CAA sends print copies of The Art Bulletin to all institutional members and individual members who choose it as a benefit of membership. The digital version at Taylor & Francis Online is available to all CAA individual members regardless of their print subscription choice.