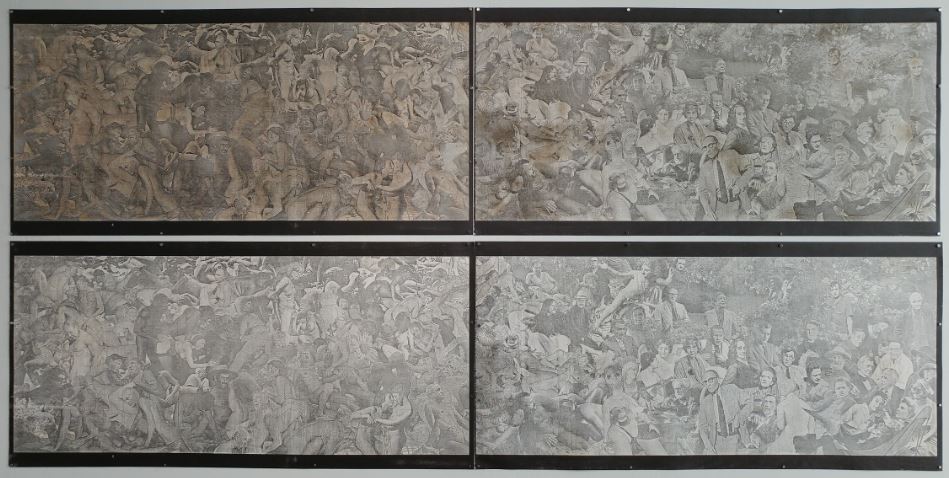 In January, Serhat Tanyolacar, an adjunct faculty member in the art department at Polk State College in Florida, was invited to submit artwork to an open faculty show. The work he submitted, Death of Innocence, was subsequently rejected by the college as being “too controversial” to display. The artwork juxtaposes sexually explicit images of political figures such as Donald Trump, Betsy DeVos and Vladimir Putin —”the world as it is” in Tanyolacar’s words—with “the world as we could be,” featuring artists, poets, and writers, like T.S. Eliot and his wife Vivienne Haigh, Neal Cassady, Sylvia Plath, Bertolt Brecht, Nâzim Hikmet, and fictional characters such as Atticus Finch and Cyrano de Bergerac.

“As you may already know, three months ago, all Polk State College art faculty received an email from Holly Scoggins, the art department head. Basically, we were being asked to participate in an art faculty exhibition on the Lakeland campus. There was no criteria listed.”

Tanyolacar said he responded the same day in an email with pictures of two of his works, including Death of Innocence, and was assured verbally by Scoggins, ‘We always support controversial work.’ As Tanyolacar explains, “To be extremely honest, I don’t think she looked at the work until the very last moment. This is what I feel.”

He continued: “Then, I waited. I didn’t hear anything until February 6th, and February 8th was the deadline. I received an email saying: ‘After review by the gallery committee’—and there was no committee, no nothing, until this moment—’the committee has decided Death of Innocence should not be displayed in the faculty art show. It will be too controversial to display at this time, and we would be happy for you to display some of your other artwork.'”

Subsequently Tanyolacar says he received criteria after the deadline, and then a phone call from the dean of academic affairs to schedule a meeting between himself, Scoggins, and the college president, Angela Garcia Falconetti. During the meeting Falconetti apologized, but maintained the work would not be shown.

“Meanwhile,” Tanyolacar continued, “I started receiving friend requests and messages from very disturbing individuals, on social media, on Facebook and Twitter, as well as private phone numbers. I think I received six or seven phone calls. I answered two of them, but nobody said anything.”

Tanyolacar has since reached out to FIRE, National Coalition Against Censorship, and PEN America for support on the issue. “Polk State should be an example.” he said. “[It’s] not only Polk State—other schools, other institutions, they are all dealing with academic freedom issues and oppression, but people chose to be passive and silent.”

FIRE and the National Coalition Against Censorship wrote to Falconetti last month, asking her to re-evaluate the decision, but a university spokesperson said they had no comment.

Having provided no criteria for works to be included in their exhibit, Polk State College cannot retroactively determine that certain topics or viewpoints are off limits. Artistic freedom must be protected on our college campuses in particular, as it is there that open debate and the sharing of diverse viewpoints contributes most directly to intellectual growth and freedom.  At a moment when universities around the country are struggling with deeply challenging issues around free expression and young people are actively engaging in public debate on these and other crucial matters, Polk State College does its students a disservice by suggesting they cannot handle a little controversial art in their hallways.

Tanyolacar is no stranger to controversy surrounding his work. He was also involved in a censorship debate in 2014, over a public artwork at the University of Iowa. He says: “I don’t give up on academia. I know that I have a voice in [it]. I take necessary risks. That’s a big part of my process, because otherwise, you cannot challenge the authority and display its flaws. That is my strategy—taking risks, and exposing the corruption, whether it is in academia or in politics.”

This interview has been edited for length and clarity.