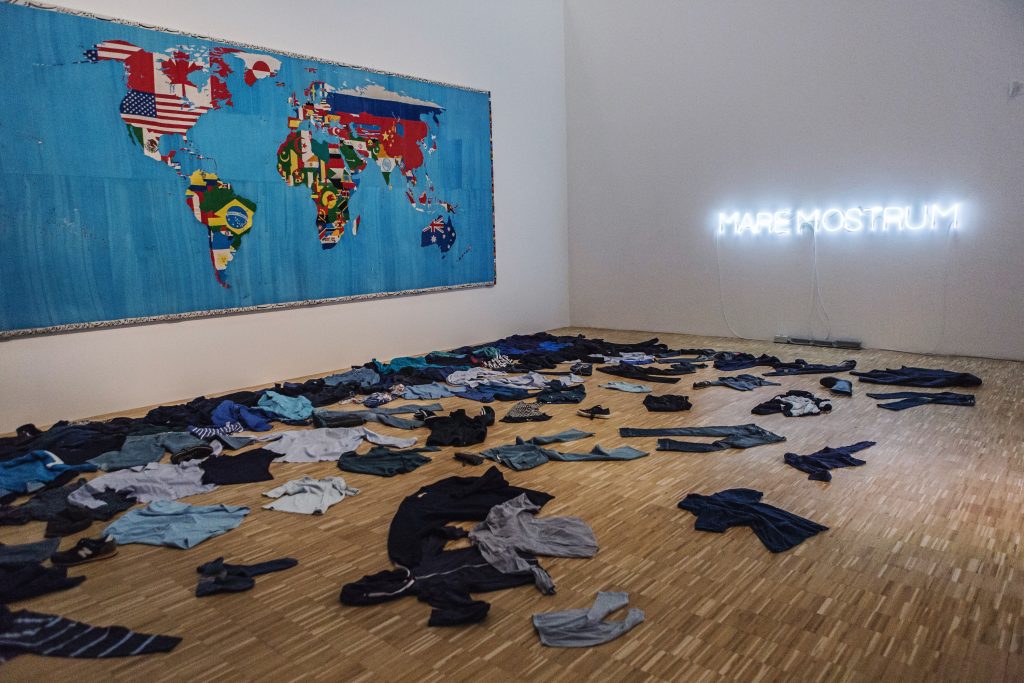 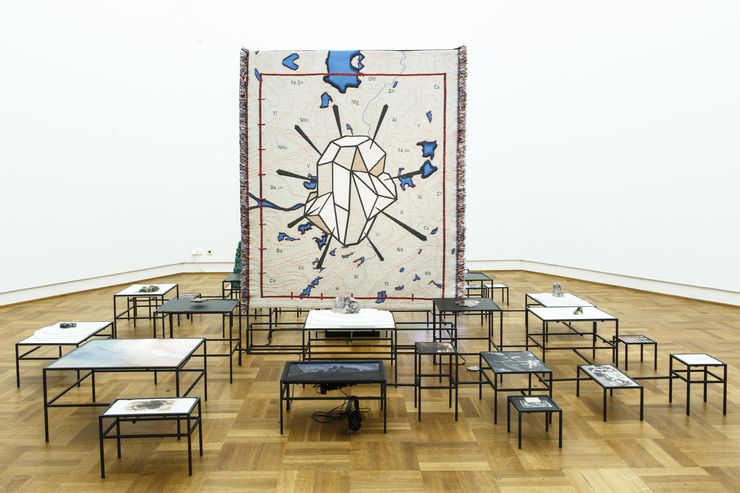 Otobong Nkanga, In Pursuit of Bling, 2014, on view at the Museum of Contemporary Art Chicago through September 2nd. Photo: Eva Broekema

CAA’s Committee on Women in the Arts selects the best in feminist art and scholarship to share with CAA members on a monthly basis. See the picks for July below.

Teresa Burga: Aleatory Structures, is the first retrospective in Switzerland of this arguably feminist Peruvian conceptualist –a central figure of the 1960s Peruvian avant-garde– whose recent rediscovery has gained her both international recognition and a second wind after a three-decade hiatus from art making.  The exhibition brings together a large number of works that range from early paintings, modular sculptures and  Pop environments to the drawings and multimedia, often cybernetic, installations which mark the complexity of her conceptualist practice, as well as its silent unfolding while working as a Customs employee when the dictatorship limited the exhibition possibilities of her vanguard proposals. In effect the show captures not only the diversity of her practice but of the ways in which it records and challenges the social realities and power structures of her changing times in Peru both as an artist and a woman.

Burga’s gendered concerns and depersonalized aesthetics coalesced through Pop experimentation with painting collages, objects and environments in a  milieu of anti-modernist rebellion that breached the gap of Limanese art and life with ephemeral art environments and happenings. Indeed she positioned herself as a female Pop artist in 1967, devoting her solo exhibition at Cultura y Libertad Gallery to a critical representation of middle-class womanhood—both a testament as well as a feminist critique of  the developmentalist euphoria of 1960s Peru. The situation of women in patriarchal society surfaces at another brief moment of hope in Peru, the return to democracy after General Alvarado’s military regime, through her collaboration with psychotherapist Marie-France Cathelat for the radical research-based work for the Perfil de la Mujer Peruana (Profile of the Peruvian Woman), 1980-1 that  surveyed anonymously  the living conditions of 129 middle-class women living Lima in their twenties about a wide assortment of issues structured along twelve “profiles” (physiological, psychological, social, educational, cultural, religious, professional, economic, etc). Between these two landmarks, Burga’s representation of women underwent transformations textured by the conceptualist turn of her work before and after her graduate studies at the School of the Art Institute of Chicago (1968-1970), as manifested by her now celebrated multimedia self-representation Autorretrato. Estructura. Informe. 9.6.72. (Self-Portrait, Structure, Report, 9.6.72), 1972 through which  Burga combined her critique of subjectivity and systems of representation, making the body matter for a critical exposure and ground for escaping its biopolitical control.

Originating from the Menil Foundation and bringing more than 30 major works from European and US collection, this is the first large-scale solo exhibition in the US in 20 years of the celebrated London-based Palestinian artist Mona Hatoum.

Merging the languages of Minimalism and Surrealism, through a feminist lens, while having experimented with a variety of media that range from performance to film, Hatoum is  istinguished for a potent sculptural and installation vocabulary that–drawing often from everyday domestic objects and engendering conflicting emotions of fear/revulsion and attraction/fascination–critically investigates ideas of home and displacement, while engaging with conditions of timely global instability and political upheaval, as well as timeless human questions.

Large forms remeniscent of prosthetics and cartilagenous body parts lie scattered inside Madrid’s Crystal Palace, a 19th century iron and glass paean to industrialized progress. Made by Nary Baghramian, these sculptures complement the rigid organicism and transparency of their architectural setting. Trussed to columns and hugging the walls, Baghramian’s installation emphasizes contingency—the body supported, and molded by its surrounds. Born in Isfahan, Iran, the artist’s work has, in the past, focused on “the political implications of interior design,” pointing out that both women and gay men were made to culturally demur from the realm of architecture proper in favor of design and the domestic sphere. Semi-transparent tubular structures abound here—some quietly take up residence by the curving walls like banquettes of seating, and others crawl over the top of the Palacio de Cristal’s roof, like skeletal grubs.

Kim Zumpfe: outside the length of a room | or | dividing into the blue sun

In the heart of Santa Ana’s arts district, Kim Zumpfe has created a bifurcated space evoking both shelter and disaster site. Upstairs the vision is bleak—a couch, stripped of all its plush, offers the only seating; photographs of discarded fruits are pinned to stacks of plywood, and a video monitor plays a loop of a seemingly bucolic lake view. Below, bedrolls made of fabric featuring rejected objects designed for prisons are spread about—small monitors play a blue, slow-motion video of what appears to be the sun’s surface. A tea kettle and a stash of bottled water serves as a welcome convivial gesture in this tunnel-like space. Recently Zumpfe enacted a performance, reminiscent of the anarchitectural gestures of Gordon Matta-Clark, in which she “drew” a linoleum bisecting the space vertically. Using a yellow crowbar to make her marks in plywood, drywall, plaster, and linoleum—this seemingly simple task proved herculean. The remaining marks from this performance remind us that space can be transformed, but only with great effort.

Best known for her “cake” and history paintings of the 1980s and 1990s, over the past twenty years Penny Siopis has also made films. Strung together from many bits of found footage, My Lovely Day, 1997, Obscure White Messenger, 2010 and The Master is Drowning, 2012, emphasize how cultural and political realities (such as apartheid in South Africa), shape personal narratives. Siopis subtitles her videos with the voices of a variety of characters; whether these people are real or imagined, it might not matter much, for each has a complicated relationship with their context. This exhibition, at the newly built Zeitz Museum of Contemporary Art Africa, provides the first opportunity to view the artist’s video output at once.

Otobong Nkanga: To Dig a Hole That Collapses Again

Interrogating how a raw material or natural resource is made into a product, for example soap or makeup, is at the heart of Otobong Nkanga’s artistic efforts. In her work, which is by turns sculptural, performative, olfactory, and wall-based, Nkanga opens out the histories of manufacture and production (and thus the extended legacies of colonialism and imperialism) so that we might determine the human and environmental costs of such processes. The body is the primary metaphor through which invasive incursion and extraction are imagined in this collection of wide-ranging works. In large-scale tapestries like Infinite Yield, 2015, glittery minerals cover the breast, face, and genitals of an androgynous, brown figure, who stands in the midst of a draining funnel. In the center of this exhibition, black soap is stacked in circular constructions—it is manufactured by the Carved to Flow Foundation (which Nkanga founded) in Akwa Ibom, Nigeria. Performers on hand describe the process of the soap’s creation, thereby amplifying the themes running throughout the show. Available for purchase in the exhibition, the circuits of capitalism serve to support the artist’s social practice. 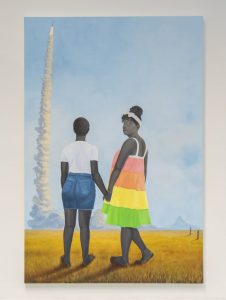 Amy Sherald’s Planes, rockets, and the spaces in between, 2018, was recently acquired by the Baltimore Museum of Art. Courtesy BMA via artnet News.

The Baltimore Museum Sold Art to Acquire Work by Underrepresented Artists. Here’s What It Bought—and Why It’s Only the Beginning

Why Do Colleges Have So Much Art?

Campus museums are home to prodigious exhibits and installations that blur the line between academics and civics. (The Atlantic)

People Across the Globe Want Their Cultural Heritage Back. Canada May Offer a Blueprint for How to Get There

Higher education is struggling to balance the demand by some students to be protected from offensive speech while guaranteeing freedom of speech to others. (New York Times)

Sir Anish Kapoor’s Clenched Fist of Copyright, the Battle Over Fair Use, and the NRA

Does an artist have the right to withhold their work when they don’t agree with the political message? (Hyperallergic)

How to Run a Conference Panel That Isn’t Horrible

Brass tacks pointers for making your next panel discussion a success. (LinkedIn)

What Should I Do with My PhD? 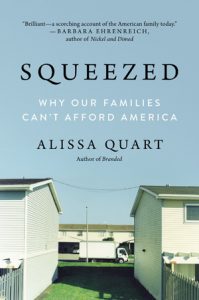 In her new book, Squeezed: Why Our Families Can’t Afford America, author Alissa Quart states what many of us know:  People are being squeezed from the middle class at a far greater pace.

“The many other middle-class families running furiously and breathlessly just to find themselves staying in place are a large and varied coterie. It includes highly educated workers like lawyers, professors, teachers and pharmacists, professionals who never expected to be in this situation – often feeling cast aside by a system that seems stacked against them. Their prospects for the future, given the rise of robots and automation within their professions, are likely to dim even further.”

This is a situation that has vexed many CAA members, whether they are recent graduates or those who have seen their livelihoods derailed through the elimination of tenured teaching positions or departmental reorganization.

Faced with a reduction in the number of faculty positions over the last decade, we’ve heard many job suggestions for artists or those with a PhD. Some have suggested teaching abroad, non-profit, foundation or governmental work. There are also opportunities in publishing, museums, literary agencies, libraries, special collections or archives.

We want to hear from you. Have you seen others in the field find fulfilling work in areas outside of academia? What job-hunting suggestions do you have for those with advanced education outside of the typical areas?

“Warriors and Volunteers: A Review of George W. Bush, Portraits of Courage” on Art Journal Open 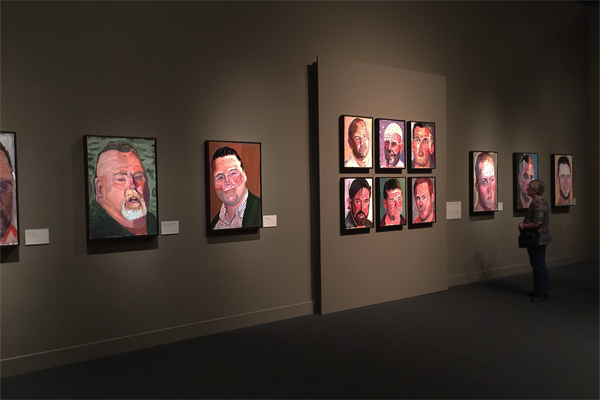 Installation images by Melissa Warak of Portraits of Courage: A Commander in Chief’s Tribute to America’s Warriors.

A new essay by Melissa Warak, “Warriors and Volunteers: A Review of George W. Bush, Portraits of Courage,” looks carefully and critically at a 2017 exhibition of paintings by former US president George W. Bush.

Warak, an art historian with close ties to veterans and active military, approaches Bush’s artistic production both technically and art-historically, but also personally and politically. Through Bush’s rendering of both visible and invisible wounds veterans sustained in the Iraq War, writes Warak, the exhibition “aims to humanize the war and highlight the president’s connection to the wounded.” Read more on Art Journal Open.