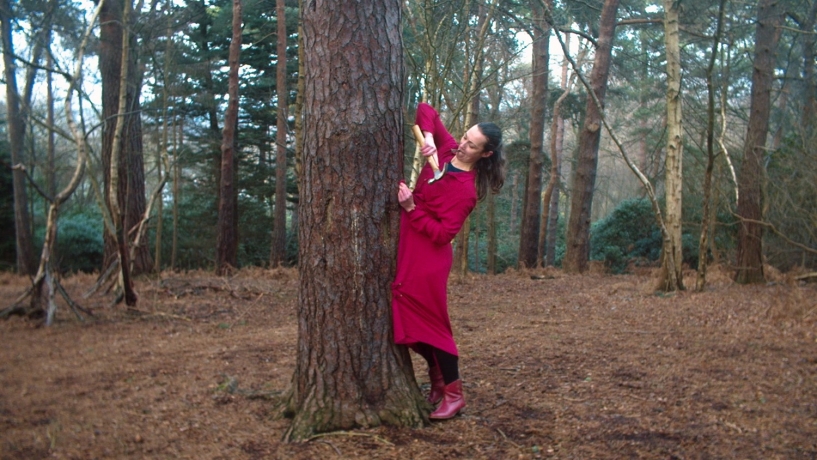 CAA’s Committee on Women in the Arts selects the best in feminist art and scholarship to share with CAA members on a monthly basis. See the picks for October below.

For its first show of the season in its new venue in Athens, Rodeo introduces the work of still understudied “un-feminist feminist” and kinetic-art pioneer, Liliane Lijn. The show includes a suite of drawings and a multimedia sculptural installation comprising two of the 1980s “goddesses” that exemplify Lijn’s multidisciplinary practice, interests, and radical exploration of the feminine, and resonates with the cultural background of Athens (a city where Liliane Lijn also lived in the early 1960s).

Conjunction of Opposites combines two figures The Lady of the Wild Things (1983) and The Woman of War (1986) made separately, when, in the 1980s, Lijn turned to an exploration of the feminine through apparitions of feminine energy and power. Ahead of their time, but in line with Lijn’s interests in science, technology, language, light, movement, mythology, and eastern philosophies characterizing her pioneering contribution to the 1960s avant-garde, they are computer controlled, combining LED lights and laser beams with an array of traditional and everyday materials, such as smoke and brush fibers. The Lady of the Wild Things is a bird goddess representing the lunar archetype and a machine activated by sound. The Woman of War is a singing goddess, the embodiment of an angry song that the artist felt came straight through the earth to her mouth. Their hybrid (mechanic and organic) bodies, as described by the artist—were combined in 1986 in an interactive installation that created a mesmerizing spiritual and sensual drama, staging an exchange of poetry and light in a cloud of artificial fog. When together, a laser light connects these “performative sculptures” through a disembodied beam of red light bouncing between their heads, activated by the six minute drama unraveling in Lijn’s voice.

These figures are “drawing together our mythological past for an imagined future, ” the artist has eloquently reminisced about their making.  Underpinning her statement is a connection between the sacred and modern industry important to this work and Lijn who observes that many of the holiest places consecrated to the Goddess in ancient times, like Eleusis near Athens, are now transformed into oil refineries and power stations, wondering what archetypes might be hidden in the “bowels of steel mills or the endless intestines of oil refineries?” But while each sculpture distills symbolic references to female archetypes and mythological beings, embodying elements of seduction, power and spirituality, interacting in Conjunction of Opposites they shatter binary notions of gender “evoking femininity as a fluid cosmic fact,” conveying the radicalness and timeliness of Lijn’s exploration of the feminine that this show tries to show, and that variously connects the lasting manifestations of her feminist concerns with her “un-feminist” feminist turn away from fixed understanding of femininity through her turn to science and technology in the 1960s.

Liliane Lijn has lived and worked in London since the late sixties, after straddling the most radical and unexpected contexts and milieus of the postwar avant-garde—Paris, where she studied archeology, New York, and even Athens, where she lived with her then-partner Takis. She was born in New York to parents of Jewish Russian origins who escaped World War II through Cuban passports, and she grew up in various US cities and Switzerland.

Artist Ronni Komarow’s solo show is centered on an interactive installation, Diary of a Bake Sale Diva, comprised of 400 hand-made papier-mâché cupcakes juxtaposed against the walls lined with 120 feet of hand-written, multi-hued script of comments, queries and inner musings around her experience as bake-sale coordinator for her son’s middle school. The visual display emits a playful vibe, with a relevant examination of public school funding today. Visitors are also invited to write with chalk on a blackboard their own bake sale experiences, exuding the artist’s community-driven ideals.

Exploring motherhood in art isn’t new but certainly the narratives explored often involve early parenthood and pregnancy; Komarow, rather, looks captivatingly at raising adolescents and the maneuvering and intermixing of motherhood, community service, school activities and artmaking. The exhibit title reflects the “tender mercies that have enriched her life, even if given inadvertently,” as so many aspects of motherhood, relatably, are. The exhibit includes artist books related these themes, also combining imagery and text, an accessible, refreshing element of the entire exhibit, in contrast to the oft-highbrow conceptual exhibitions reserved for the few.

From the abaya to the hijab to the ‘burkini’—this wide-ranging exhibition explores the dynamism of Muslim fashion—at a moment when social and political hostilities towards muslims is at an all time high. For this reason alone the exhibition should be required viewing. Following on the heels of other travelling ‘blockbuster’ fashion exhibitions at the de Young (Jean-Paul Gaultier and Vivienne Westwood are two recent monographic examples), this show feels constituitively different, with its emphasis on religious life, culture, and expression. Curated by Reina Lewis, who teaches cultural studies at the University of the Arts London and the London College of Fashion, an in consultation with muslim fashion leaders in the Bay Area, the show is careful never to spectacularize the fashion on display (a mainstay of blockbuster fashion shows), but uses the garments as a jumping off point to consider religious life, Orientalism, subjugation and liberation (many of the mannequins wear hijabs, but some do not—reflecting the diversity of opinion as to whether or not the enforcement of the wearing of the hijab is an oppressive religious dictat).

Dian Pelangi is a recurring and innovative presence in the exhibition. One ensemble (pants, skirt, jacket, top, headscarf and cap) plays with different familiar Islamic forms—patterning commonly found in tiling and screens (mashribiyas). Pelangi’s designs as well as many others in the exhibition make the point with clarity that Muslim communities are not homogenous or monolithic.

“Inhaling patriarchy and exhaling wo(fem)inism,” is how Noor Afshan Mirza captures the importance and the gender revolution ignited in The Scar, the film she and Brad Butler produced during their Delfina Foundation residency in London in 2015. In this installation the film appears in the form of an immersive five-screen video installation.

Inspired by a true event and comprising three chapters (The State of the State, The Mouth of the Shark and The Gossip), The Scar combines conspiracy, gangster, noir, politics, crash theory, fantasy and reality into a disrupted and disruptive narrative. Chapter one features four passengers on a journey in a black Mercedes, unaware of their significance as state archetypes. The fourth passenger is Yenge, the only female traveller, silenced by the genre conventions of women in film. Yenge’s noir voiceover begins to interrupt the male characters’ forced bravado in chapter two, as they are haunted by the Resistant Dead – the residual movements created from stories of people refusing to be forgotten. Tales of female emancipation and empowerment, are addressed in the last chapter, where a group of female activists transcend time, geographical borders and linguistic barriers to gather in a neutral nether-realm of conversation and mutual support. Like most of the work of this radical collaborative duo based The Scar takes on, and deconstructs, urgent and complex narratives around our relationship to state power engaging issues of inequality and corruption, while proposing a post-patriarchal near future.

Founders of the London-based center for artist film production no.w.here, and known for their fictional construct The Museum of Non Participation, (2008-20016) Mirza and Butler create work which spans the moving image, installation, sound, text and performed actions and explores themes of resistance, inequality, power and privilege, and (non) participation while questioning the deep state, narration, neoliberalism and investigating the use of women’s bodies as sites of resistance.

“Suellen Rocca is one of the original members of the Hairy Who, the influential group of six Chicago artists who exhibited together for five years in the 1960s. This show, the first to concentrate on Rocca’s works on paper, presents thirty drawings she made between 1981 and 2017. Building on the unique graphic vocabulary and innovative compositions of her 1960s work, these drawings represent a turn toward imagery she describes as ‘more internal.’ Animals, trees, and unclassifiable creature are placed in densely patterned settings that carry a genuine emotional charge.

The exhibition is accompanied by a fully illustrated catalog. In the essay, Cat Kron notes Rocca’s “increased attention to the unconscious,” tracing parallels between the artist’s ‘anxious imaginings’ and the automatic drawing of the Surrealists. As Rocca puts it, ‘I just begin, and the drawing is a journey between me and the marks on the paper.’” (Matthew Marks; Press Release)

Alexandra Bachzetsis: An Ideal for Living

A choreographer and visual artist based in Zürich, Alexandra Bachzetsis is known for works in space that radically cut across the boundaries between dance, performance art, visual arts and theater and use the body as an artistic and critical apparatus. Her work investigates the choreographies of the body and how culture provides source material for its gestures. Through an interdisciplinary approach that often explores the role of popular culture and art play in the way in which bodies are inhabited and performed through choice and cliché, her works open emancipatory possibilities of transformation and communication.

An Ideal for Living, an exhibition specially conceived for Centre Culturel Suisse in Paris, focuses on Bachzetsis’ exploration of the subject of bodies over time and its subversive potential. Using various garments and accessories in a process of constructing imagination and desire, the artist explores ways in which bodies and objects are reversible, drawing inspiration from vogue culture. The exhibition comprises an installation of three simultaneous video projections in which a pair of teenagers, a boy and a girl with an uncanny resemblance, act out real-life situations and sing songs. It also includes low platforms that invite the visitors to strike poses or sing out loud, along with various gym equipment on which to warm up and shape up one’s body. Suggesting the potentially subversive ambiguities of body language, An Ideal for Living keeps posing the rather crucial question for efficient body politics, in the words of Paul B. Preciado: “Are you a Platonist of political anatomy or a Nietzschean of bodily movement? Are you more object or subject? How do you select your gestures? Have you ever stolen a gesture? Will you ever invent one?”