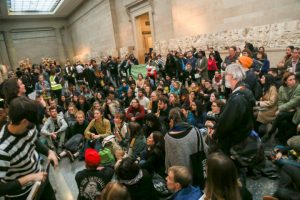 Hundreds gather in the atrium of the British Museum for an unofficial “Stolen Goods Tour.” Photo by and courtesy of Diana More, via Hyperallergic

Kaywin Feldman, of the Minneapolis Institute of Art, will be the first woman to hold the job in the museum’s 77-year history. (New York Times)

Influencers in Higher Education in 2018

See Chronicle‘s list of the people who shaped higher ed (for better or worse) in 2018. (Chronicle of Higher Education)

Explore a thread by UT Austin professor Dr. Stephennie Mulder on how to use a Wikipedia edit-a-thon to teach art history. (Twitter)

How Artists Can Master Dealing with Rejection

Straightforward tips for artists—and everyone, really—to deal with an inevitable part of the creative process. (Artsy)