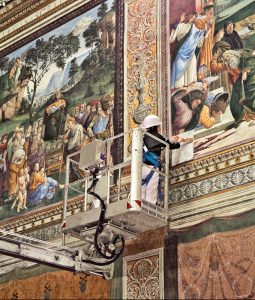 A master conservator demonstrating a technique for removing contaminants from a Botticelli fresco in the Sistine Chapel. Photo by Robert Polidori for WSJ Magazine, via artnet News

The proposal has prompted discussion on the value of a university press to its parent institution as well as an open letter from the larger academic community. (Chronicle of Higher Ed)

Preserving the Sistine Chapel Is a Never-Ending Task. See Behind-the-Scenes Photos of What It Takes

The name of the game? Constant vigilance. (artnet News)

Rediscovering the Confederate Flag of Truce

Sonya Clark, a professor of art and art history at Amherst College, is presenting the flag as a counterweight to the familiar battle flag of the Confederacy. (New York Times)

The Museum of Contemporary Art in Chicago has created a tool that seamlessly integrates image descriptions into its online platform. (Artsy)

Mónica Ramírez Talks The Bandana Project, Her Latinidad, And Her Career In Farmworkers Advocacy

Explore an art-activism project from the organizer who helped create the #TimesUp movement. (Forbes)

The statistic popped up frequently in conversation about Elizabeth Warren’s education plan. (Slate)