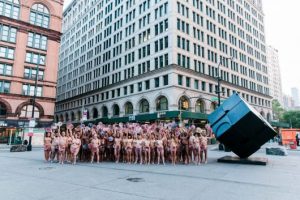 The company’s announcement comes after a protest outside its New York headquarters, co-organized by the National Coalition Against Censorship and artist Spencer Tunick. CAA is one of over 250 signatories on the NCAC’s open letter to Facebook. (CNN)

In a sign of increasing demand for transparency at art institutions, hundreds of arts workers have anonymously shared their salary and employment information in an online spreadsheet. (ARTnews)

Protests at Oberlin Labeled a Bakery Racist. Now, the College Has Been Ordered to Pay $11 Million for Libel.

The verdict comes at a time of heightened scrutiny of free speech on college campuses. (Washington Post)

Stonewall: When Resistance Became Too Loud to Ignore

A look at the exhibitions marking the 50th anniversary of the Stonewall uprising, in conjunction with LGBTQ Pride Month. (New York Times)

Researchers surveyed the collections of 18 major US museums to quantify the gender, ethnic, and racial composition of the artists represented in their collections. (Hyperallergic)