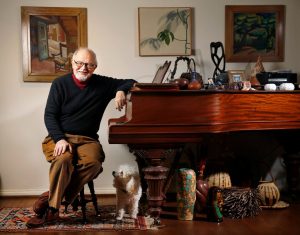 We were saddened to learn of the passing of longtime CAA member Dr. Richard Brettell last month at the age of 71. Dr. Brettell was a tireless advocate for the arts, a well-respected scholar, former director of the Dallas Museum of Art, and founding director of the Edith O’Donnell Institute of Art History at the University of Texas, Dallas. Read an remembrance by Jonathan D. Katz, Interim Director, Gender, Sexuality and Women’s Studies and Associate Professor of Practice in the History of Art at the University of Pennsylvania, below.

Richard (Rick) Brettell died July 24, 2020 in Dallas after a long battle with prostate cancer—and entirely characteristically, he was working until the very end. A tireless advocate for the arts in general, for French Impressionism in particular and for Texas artists and the local cultural scene, Brettell spanned genres, chronologies, nationalities and professions with an acrobatic grace. He was a world class scholar, a museum director and builder, and above all a connector, of people to ideas, of money to institutions, of museums in France to museums in the US, of friends to other friends. Seemingly limitless in his capacity to extend friendship and take it up again, I’m sure there are legions out there who think Rick was their best friend. A man of sure and independent judgment, Brettell was as thrilled to bring attention to an underknown or even unsung artist as he was to Gauguin, and approached both with the same profound curiosity and boosterism.

A graduate of Yale University, Brettell’s dissertation on Pissarro set the pattern for the rest of his life. Once he became interested in something, he would not only write about it, he’d also work up an exhibition spotlighting it—in this case, the very first international Pissarro exhibition, curated when he was still quite young. He turned his enthusiasms into scholarship with a speed and assurance that suggested he saw no difference between the two modes. And the goal was always the same, to kindle the viewer’s own enthusiasm, to seduce close looking and careful thought and make art history, art criticism, and art appreciation one and the same.

Initially hired as a professor at the University of Texas, in 1980 Brettell left Texas to become the Searle Curator of European Painting at the Art Institute of Chicago. Renovating and reinstalling the Art Institute’s vast European art collection hardly impeded the string of notable international exhibitions he curated, most centrally the one that earned him the honor of being named a Chevalier (Arts et Lettres) by the French government: A Day in the Country, Impressionism and the French Landscape.  Because Brettell traveled in some of the most rarified circles in the country, his genuine friendships with some of the country’s wealthiest citizens made him a rainmaker in a class by himself. When he was a curator at the Art Institute of Chicago and I was still a grad student, I remember visiting him at the museum to ask about the whereabouts of a specific Gauguin painting, the subject of a paper I was assigned. Rick reached down to the safe at his feet, opened it, pulled it out and nonchalantly asked, “this one?”

In 1988, Brettell moved to Dallas to become the McDermott Director of the Dallas Museum of Art. There he continued to develop important international exhibitions—including a new emphasis on the arts of Latin America and Africa—while also raising the funds to build a major new wing. In 1998, Brettell became the Margaret McDermott Distinguished Chair in Art and Aesthetic Studies at the University of Texas, Dallas (UTD). He would soon transform UTD, bringing in such transformational gifts as a huge endowment to build the Edith O’Donnell Institute of Art History. With the assistance of Margaret McDermott, in 2017 Brettell created a $150,000 bi-annual lifetime achievement in the arts award, The Richard Brettell Award in the Arts. The following year, he acquired the Barrett collection of Swiss art for UTD, consisting of 400 works, including a large percentage by the Swiss 19th/early 20th-century master Ferdinand Hodler. And last year, he helped UTD acquire the extensive Crow Collection of Asian Art, along with 23 million dollars to build a new museum, the second for the collection, on campus. A lifelong student of architecture, he helped to found the Dallas Architecture Forum. Many doubtless fondly remember his loud, enthusiastic, no holds barred architecture tours, where he would alternately vigorously praise and vehemently excoriate architects, and the houses and institutions they built.

Brettell was the author of numerous books and catalogs, including the editor of the forthcoming Gauguin catalogue raisonné. As a leading international specialist in French art history, he joined forces with his friend Elizabeth Rohatyn, then the wife of the Ambassador to France under Clinton, and Françoise Cachin, former Director of the French National Museums, to found an organization called  FRAME (French/Regional/American Museum Exchange). He directed this project in cultural diplomacy bringing together twelve French and twelve American museums to cooperatively share works and develop exhibitions. For this effort, he was named a  Commandeur in the French Order of Arts et Lettres. For decades, Brettell was loyally assisted by Pierrette Lacour, who shared his grand visions, but was rather more attentive to the nuts and bolts work of bringing them about.

Immensely erudite, opinionated, and frank, Brettell would assert that fame was no barometer of quality. He loved complicated, intelligent work regardless of the artist’s standing. He boosted Texas artists in general, and none more so than James Magee, an artist he frequently called the most underrated in the country. He was central to the ongoing effort to protect  Magee’s extraordinary project in the desert outside of El Paso, The Hill, a hand-built mytho-poetic compound that has taken the bulk of Magee’s artistic life.

A famous raconteur, fabulous cook, witty tour guide, emotional lover of beauty and gossip, Brettell was roundly adored. He leaves behind his wife Caroline, his 94 year-old mother, his assistant Pierrette, and legions on every continent who basked, however briefly, in the warmth of his attention. A celebration of his life will be held at a later date. But those who wish to remember Brettell are encouraged to make donations to the University of Texas at Dallas’ Richard Robson Brettell Reading Room in the future UTD Athenaeum, which Brettell helped conceive.