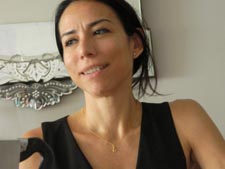 Rosa Gabriella de Castro Gonçalves is an associate professor of Art Theory and Aesthetics at the Federal University of Bahia, Brazil. Gonçalves studied at the University of São Paulo, where she received a PHD in Philosophy with a thesis on Kant, Greenberg and Formalism in Visual Arts. In 2011 she spent one year as a visiting scholar at the Art and Art History Department at Stanford. In 2013 she was awarded to a Getty Library Grant and developed a project about the Greenberg Papers in the Special Collections of the Getty Research Institute. Her main research interests include Modernism, Modern Art and criticism in the 1960s and 1970s. 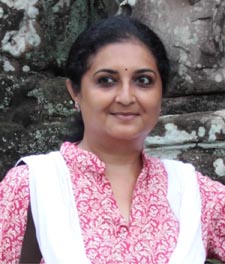 Parul Pandya Dhar is Associate Professor of South and Southeast Asian Art History at the Department of History, University of Delhi. Her work engages with early Indian art and architecture and the connected histories of Asian art, especially the architecture and iconography of cross-cultural exchange between South and Southeast Asia. She has authored The Toraṇa in Indian and Southeast Asian Architecture (2010), edited Indian Art History: Changing Perspectives (2011) and co-edited Temple Forms and Imagery in South and Southeast Asia (forthcoming 2015), Asian Encounters: Exploring Connected Histories (2014), and Cultural Interface of India with Asia: Religion, Art and Architecture (2004), besides several papers. An alumnus of Kalakshetra, Chennai, she has been a noted Bharatanatyam artiste, an aspect that deeply influences her academic work. She was awarded the Alexander von Humboldt Post-Doctoral Research Fellowship at the Freie Universitæt, Berlin (2007-08), and also the Nehru Trust Research Grant, London (2004). 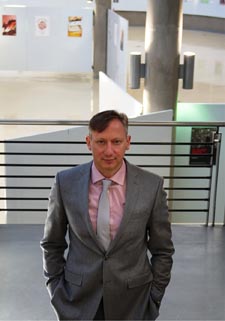 Federico Freschi, BAFA (Wits), BA Hons (UCT), PhD Wits, is Executive Dean and Full Professor in the Faculty of Art, Design and Architecture at the University of Johannesburg.  His research focuses primarily on the political iconography of public buildings, and the extent to which the decorative programmes of public buildings are imbricated in the construction of imaginaries of national belonging.  A secondary line of research has been into the construction of the canon of modern South African art, and more recently how the art market is implicated in this.
Prof Freschi is the President of SAVAH (the national Association of South African Visual Arts Historians), the first and only African Vice-President on the Board of CIHA (the Comité International d’Histoire de l’Art), a member of the editorial board of De Arte, and a member of the International Committee of the College Art Association. 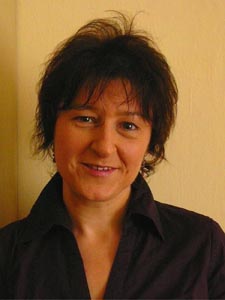 Gyöngyvér Horváth served as an Assistant Professor of art history from 2008 to 2013 at the Institute for Theoretical Studies at Moholy-Nagy University of Art and Design, Budapest, and she also taught courses on the history and methodology of art at Eötvös Loránd University and Pázmány Péter Catholic University, Budapest. She obtained her doctorate in 2011 from the School of World Art Studies and Museology, University of East Anglia, Norwich, UK. Her research concerns the historiography and methodology of art history, early modern painting and book illustration; it focuses especially on the phenomenon of visual narration. She has published on various topics related to pictorial storytelling, including Lessing's theory, the use of anachronism in narrative painting of the Quattrocento, and narrative classifications. Currently she is working on a book Narrative Art History, which examines the historiography and methodology of the research on visual narration within art history, narratology and semiotics, supported by research grants from Dumbarton Oaks, Harvard University (2013) and Princeton University (2014). 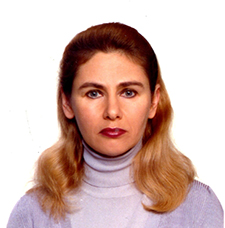 Irena Kossowska is a professor of Art History at Copernicus University in Torun and at the Institute of Art of the Polish Academy of Sciences in Warsaw. A specialist in the fields of nineteenth- and twentieth-century visual arts, art theory, and criticism in Europe and the United States, she is the recipient of numerous awards and fellowships, including from the National Humanities Center, the Center for Advanced Study in the Visual Arts, and the Smithsonian Institution (U.S.); the Zentralinstitut für Kunstgeschichte (Munich); (U.S.); the Institut national d’histoire de l’art (Paris), the British Academy, the Henry Moore Institute (Leeds); the Finnish Academy of Sciences; the Royal Academy of Letters, History, and Antiquities (Sweden), and the Norwegian Academy of Sciences. She has written extensively on Polish and European art; recent publications include The Search for Cultural Identity in Eastern and Central Europe 1919-2014 (2015), Symbolism and Young Poland (2010); and Reinterpreting the Past: Traditionalist Artistic Trends in Central and Eastern Europe of the 1920s and 1930s (2010). 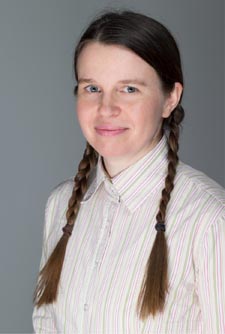 Pavlína Morganová is a Czech art historian and curator, a vice-rector of the Academy of Fine Arts in Prague, and director of the Research Center at Academy of Fine Arts in Prague. The author of the book Czech Action Art / Happenings, Actions, Events, Land Art, Body Art and Performance Art Behind the Iron Curtain (Karolinum Press, Prague 2014), she is the co-editor of the anthology of manifestos and documents from Czech art 1939-1989 (České umění 1939-1989, Academia 2001) and documents and text from Czech Art 1980-2010 (České umění 1980-2010 / Texty a dokumenty, VVP AVU 2011). She has curated a number of exhibitions, including In a Skirt – Sometimes, Moravian Gallery in Brno and Gallery of the City of Prague, 2014, The Beginning of the Century, Gallery of Western Bohemia, Pilsen 2012, and Insiders / The Unobtrusive Generation of the Late 1990s exhibition, The House of Arts, Brno. Morganová also publishes widely in journals and exhibition catalogues.

Judy Peter is a visual cultural art historian, curator, jewelry design lecturer and Head of Department at the University of Johannesburg. She has published in the areas of gender studies, post-colonial studies and cultural studies in national and international journals, and presented academic papers both nationally and internationally in Brisbane, Massachusetts, Rijeka, New York. Peter and Cristian Nae, from Romania, conceptualized the collaborative research project: Between democracies 1989-2014: Remembering, narrating and reimagining the past in Eastern and Central Europe and Southern Africa (EESA) for the period 2015 to 2018. She is also a member of South African Visual Arts Historians, College Art Association, Arts Council of the African Studies Association, and the South African Jewellery Council. Outward bound short learning programs for students from the University of Johannesburg have been facilitated by Peter to Zagreb in 2014, to New York City in 2015, and to Paris in 2016. She has also curated student jewellery exhibitions in South Africa, London, Zagreb and New York. 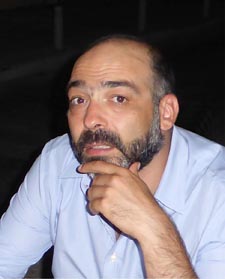 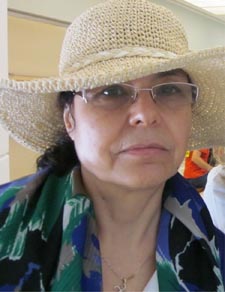 Professor Malvina Rousseva is an architect and architectural historian at the Institute for Art Studies at the Bulgarian Academy of Sciences who specializes in the investigation, documentation, and preservation of immovable cultural heritage. Her scholarly expertise encompasses the material and spiritual culture of the ancient Mediterranean, with a particular focus on Thracian architecture. She is the author of Thracian Cult Architecture (published in both Bulgarian and English in 2000), as well as Thracian Tomb Architecture in the Bulgarian Lands, V - III c. BCE.(2002), and Methodology for the Scholarly Investigation of Thracian Architecture: Analysis, Interpretation, Symbolism (2013). Dr. Rousseva has taught at several universities and leads a professional course organized by French and Bulgarian cultural institutions to train architects in the conservation and preservation of monuments of culture. As head of the Archaeology department at the former National Institute for Monuments of Culture, she spearheaded the investigation, documentation, and preservation of many Bulgarian archaeological and architectural sites. She holds M.A., R.A., and Ph.D. degrees in the History and Theory of Architecture from the University for Architecture, Construction, and Geodesy, Sofia, Bulgaria. 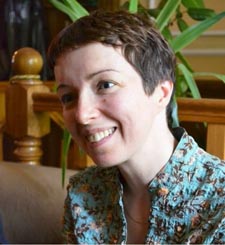 Hanna Rudyk is a deputy director and a curator of Islamic arts at the The Bohdan and Varvara Khanenko National Museum of Arts in Kyiv, Ukraine. In 1998 Rudyk graduated from the National University of “Kyiv-Mohyla Academy” (BA, MA, Cultural Studies), and in 2001 she completed PhD program (Art History) in the same university. Since 2002 she works for the Khanenko National Museum. She was a curator of a current permanent exhibition of Islamic art (2006). Her research work was also presented in publications (articles and catalogues) and curatorial exhibition projects: “Muhamaddan Blue. Cobalt іn Asian and European Ceramic Traditions” (2005), “The Land of Fire and Carpets. Azerbaijan Carpet-Weaving from 17th -20th Century”  (2007), “Suzani, an Amulet of Life. 18th  - 20th Century Embroidery Art of Uzbeks and Tajiks“ (2011), “The Sense of Her Life. Varvara Khanenko – an Art Collector, a Philanthropist and a Museum Founder”(2013). As deputy director (appointed in 2011) Rudyk is responsible for the development of new museum approaches to interpretation and presentation of premodern art collections for various contemporary audiences. 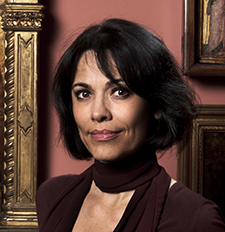 Dóra Sallay is curator of early Italian paintings at the Museum of Fine Arts (Szépművészeti Múzeum) in Budapest; she was formerly a curator at the Christian Museum (Keresztény Múzeum) in Esztergom. She studied in Grand Rapids (MI), Prague, and Budapest, and holds degrees in art history, English, and medieval studies. Her primary research interests are early Italian – especially Sienese – panel paintings. She is the author of Corpus of Sienese Paintings in Hungary, 1420–1510 (2015), as well as numerous articles and other publications on fifteenth-century Sienese art. Her research interests also include the reception and collection history of early Italian paintings. In the latter field she has published Raffaele Bertinelli és reneszánsz képtára (2009), a book on the Renaissance painting collection of Raffaele Bertinelli (1802–1878), which now forms part of the Christian Museum. She has received several awards and scholarships, including grants from the Hungarian state (2001, 2004, 2006), the Kunsthistorisches Institut in Florence (2007, 2008), and The Harvard Renaissance Center For Italian Renaissance Studies at Villa I Tatti, Florence (2011).

Shao-Chien Tseng received her doctorate in Art History from the University of Iowa. She is professor and chair of Graduate Institute of Art Studies at National Central University in Taiwan. Her research interests focus on connections between natural history and visual culture, representations of the city and landscape, and modernist exoticism. Her articles on modern and contemporary art have appeared in The Art Bulletin, History of Photography, Oculus, Journal of Art Theory and Practice, Journal of Taipei Fine Arts Museum, among others. She edited the book Approaches to Visual Studies, and several exhibition catalogues on Taiwanese art. She is the author of the chapters in volumes including Art and Identity, In / Sight: Visual Culture and Aesthetics, Perspectives on Degas (Ashgate, 2016). She has received research grants from the Academia Sinica, and Ministry of Science and Technology in Taiwan, and international travel awards from the CAA/ Getty Foundation and Nineteenth-Century Studies Association. 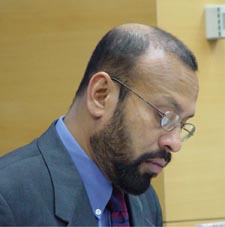 Jagath Weerasinghe received his BFA degree from the Institute of Aesthetic Studies, University of Kelaniya, Sri Lanka, and an MFA degree from American University, Washington D.C. He has exhibited widely, including the 4th Asian Art Show (1994), Fukuoka, Asia Pacific Triennial (1999), and the Singapore Art Biennale (2006). He is a founding member of the Theertha Artists Collective and the National Trust of Sri Lanka. He is also a conservator of mural paintings and has restored important mural sites, including the bomb-damaged murals of the sacred Tooth Relic Temple, Kandy, Sri Lanka, Brumidi Frescoes, US Congress Building, Shahi Hamaam Murals, Lahore, Pakistan. He is a recipient of the David Lloyed Kreeger Award, American University; the Bunka Cultural Award, Sri Lanka; the Hirayama Silk Road Fellowship;  Visiting Fellowship, Institute of Archaeology, University of London; ICCROM Fellowship for Conservation Studies, ICCROM, Rome; and Visiting Scholar, University of California at Berkeley. Currently he is a professor at the Postgraduate Institute of Archaeology of the University of Kelaniya teaching and researching History of Art, History and Theory of Archaeology, and Heritage Preservation.