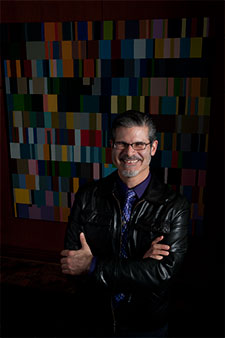 CAA has been a resilient leader among professional organizations that advocate for the relevance of the humanities in society. It has boldly addressed issues that include best practices in fair use for the visual arts and the uncertain environment for contingent university faculty. My commitments as a scholar, translator, writer, and educator synchronize with my efforts to work in support of artists, museum professionals, and art historians, especially those who endorse cultural difference in creative research from a variety of embodied attentions. I believe my unique interdisciplinary background is especially suited to CAA’s leadership. I engage critically with the developing historiographies and methods of art; I espouse the literary status of art writing that seeks to be self-reflective in its research design; and my teaching and research have long been invested in the curricular links between art history and related interpretive projects. My institutional experience has also provided me with insight into the pressing need for transparency and best practices at a time when academic integrity meets new challenges from the culture at large. I endorse CAA’s engagement with issues that include the impact of data visualization technologies on knowledge production and establishing guidelines for the assessment of digital humanities research in the tenure and promotion process. To this end, I engage in conversations about research alternatives from various fields, and I bring a wealth of professional energies that enhance a unifying purpose: to contest narrow boundaries, both cultural and disciplinary.

Tejada lived in Mexico City from 1987 to 1997 where he worked as an editor of Vuelta, the cultural monthly published by the late Nobel laureate Octavio Paz, and as executive editor of the art history journal Artes de México. He received his BA from New York University and his PhD from the State University of New York, Buffalo. He has taught at the National Autonomous University of Mexico (UNAM); Dartmouth College; University of California, San Diego; University of Texas at Austin; SMU Meadows School of the Arts; Naropa University’s Summer Writing Program and the Milton Avery Graduate School of the Arts at Bard College. He is the Hugh Roy and Lillie Cranz Cullen Distinguished Professor at the University of Houston, where as faculty in the Creative Writing Program he teaches in the English and art history departments. Tejada’s research and teaching methods interrogate modern and contemporary image environments from an interdisciplinary viewpoint: a critical art history whose visual knowledge can locate objects and actors in the global-culture context. Committed to conversation whereby culture and poetics enliven sites of inquiry—regional, transnational, and diasporic—Tejada’s research and creative interests involve the language arts and image worlds of Latin America, especially Mexico and Brazil, the US-Mexico borderlands, and other sites of US Latina/o cultural production.

Roberto Tejada is eminently qualified to be a member of the board of the College Art Association and will, in addition, be an important force on it if elected. With very broad training in visual studies and transhistorical modes of analyses, he is also a first rate art historian, especially of photography and Latin American art. He has also worked actively with artists and was, perhaps most importantly, an editor for nearly ten years (before graduate school at SUNY Buffalo) of the extraordinary art and art history journal of Mexico, Artes de México. Fluent in English, Spanish and Portuguese, he has become the kind of “American” art historian that should be a model for the field as a whole, and he will bring a wealth of connections to CAA. Roberto has had numerous fellowships and awards, proving both his abilities and the strength of his network. As a former board member of CAA, I recommend him without reservation and with great enthusiasm.