The following article originally appeared as “Cahill Is 2004 Distinguished Scholar” in the November 2003 CAA News. Cahill also won the Distinguished LIfetime Achievement Award for Writing on Art in 2007. 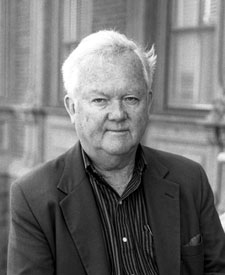 The CAA Distinguished Scholar Session was inaugurated in 2001 to engage senior scholars in the Annual Conference and celebrate their contributions to art history. But its aim is greater. At a time of great methodological shifts in the field, this session fosters dialogue within and among the different generations of art historians. Past honorees include James Ackerman, Leo Steinberg, and the late Phyllis Pray Bober. This year in Seattle, CAA will salute James Cahill, a renowned scholar of Asian art and professor emeritus of the History of Art Department at the University of California, Berkeley.

Cahill was born in Fort Bragg, California, in 1926. He received his BA degree in Oriental languages from the University of California, Berkeley, in 1950, and his MA (1952) and PhD (1958) in art history from the University of Michigan, Ann Arbor, having worked principally with Max Loehr. He studied with Shujiro Shimada at Kyoto University in 1954–55 on a Fulbright Scholarship, after holding a museum-training fellowship at the Metropolitan Museum of Art in New York. In 1956, he worked with Osvald Sirén in Stockholm on his seven-volume Chinese Painting: Leading Masters and Principles (1956–58).

On his return to the United States in 1956, Cahill joined the staff of the Smithsonian Institution’s Freer Gallery of Art in Washington, DC, where he served until 1965 as curator of Chinese art. From 1965 until his retirement in 1994, he was professor of the history of art at the University of California, Berkeley. CAA awarded him its Distinguished Teaching of Art History Award in 1995.

Cahill’s publications include the widely read and much-reprinted Chinese Painting (1960) and many other books and exhibition catalogues, as well as numerous articles on Chinese and Japanese painting that have appeared in both scholarly journals and popular publications. He was also joint author of the first volume of The Freer Chinese Bronzes (1967). Cahill undertook a five-volume series on later Chinese paintings, three of which have been published: Hills beyond a River: Chinese Painting of the Yüan Dynasty, 1279–1368 (1976); Parting at the Shore: Chinese Painting of the Early and Middle Ming Dynasty, 1368–1580 (1978); and The Distant Mountains: Chinese Painting of the Late Ming Dynasty, 1570–1644 (1982). He has also compiled An Index of Early Chinese Painters and Paintings: T’ang, Sung, and Yüan (1980) and is working on a computer database of a similar index for Ming painting. Translations of his books have been published in Chinese, Japanese, Korean, and several European languages. 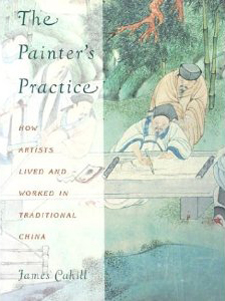 James Cahill, The Painter’s Practice: How Artists Lived and Worked in Traditional China (1994)

For the 1978–79 academic year, he was Charles Eliot Norton Professor of Poetry at Harvard University in Cambridge, Massachusetts, delivering a series of lectures entitled “The Compelling Image: Nature and Style in Seventeenth-Century Chinese Painting.” These appeared in 1982 as a book, which was awarded CAA’s Charles Rufus Morey Prize in 1984. His Franklin D. Murphy Lectures for the University of Kansas were published as Three Alternative Histories of Chinese Painting (1988) and the Bampton Lectures given at Columbia University appeared as The Painter’s Practice: How Artists Lived and Worked in Traditional China (1994). The Reischauer Lectures delivered at Harvard University in 1993 were published as The Lyric Journey: Poetic Painting in China and Japan (1996), and a fifth lecture series, the Getty Lectures presented at the University of Southern California in 1994 as “The Flower and the Mirror: Representations of Women in Late Chinese Painting,” is presently being revised for publication. Another forthcoming book is entitled Pictures for Use and Pleasure: Urban Studio Artists in High Qing China. A companion volume, tentatively entitled Chinese Erotic Painting: Supplement to Pictures for Use and Pleasure, is also in preparation.

In 1973 Cahill was a member of the Chinese Archaeology Delegation, the first group of art historians from the US to visit China, and in 1977 he returned there as chair of the Chinese Old Painting Delegation, which was given unprecedented research access to collections there. Since then he has visited China frequently, lecturing at art academies and universities, organizing and participating in symposia, seeing exhibitions and collections, and doing research.

Cahill and his wife, the artist and art historian Hsingyuan Tsao, spent the 1998–99 academic year at the Institute for Advanced Study in Princeton, New Jersey. They now live in Vancouver, where she teaches at the University of British Columbia. Their twin sons Julian and Benedict were born in August 1995.

The 2004 Distinguished Scholar Session, entitled “Decentered, Polycentric, and Counter-Canons in Chinese Painting,” took place on Thursday, February 19, 2004, 2:30–5:00 PM at the Washington State Convention and Trade Center in Seattle. The independent scholar Leatrice Mendelsohn chaired the session, and the panelists were Leslie Korrick of York University; Christiane J. Hessler of Berlin University; Elisabeth Brotherton of the State University of New York, New Paltz; and Thijs Weststeijn of the University of Amsterdam.