The following article originally appeared as “Linda Nochlin Is Distinguished Scholar at Annual Conference” in the November 2006 CAA News. 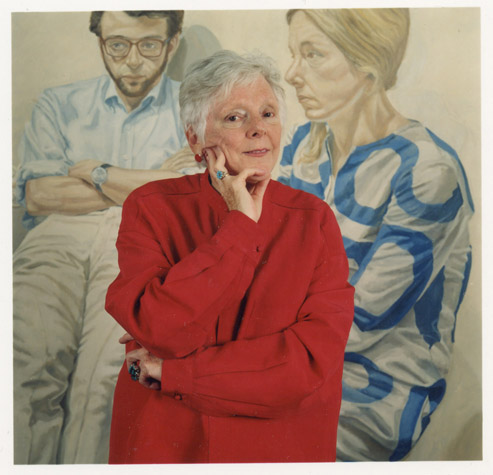 Linda Nochlin, Lila Acheson Wallace Professor of Modern Art at New York University’s Institute of Fine Arts (IFA), is the Distinguished Scholar for the 2007 Annual Conference in New York. A specialist in nineteenth- and twentieth-century painting and sculpture, contemporary art and theory, and women and art, Nochlin received her PhD from the IFA in 1963. She also earned a BA in philosophy at Vassar College in 1951 and, a year later, an MA in English at Columbia University. Since the 1960s, Nochlin has taught at Yale University, the Graduate Center and Hunter College, both of the City University of New York, and Vassar College; she has been at the IFA since 1993.

Nochlin is widely respected for her work on Realism and, in particular, the work of Gustave Courbet—a painter of interest to her since embarking on her doctoral dissertation—as well as for her seminal publications on nineteenth-century art. These include Realism (1971), Realism and Tradition in Art, 1848–1900 (1966), and Impression and Post-Impressionism, 1874–1904: Sources and Documents (1966). She has also written on a diverse group of contemporary artists, including Robert Gober, Nancy Graves, Philip Pearlstein, Judy Pfaff, Jenny Saville, Miriam Shapiro, and Sam Taylor-Wood.

Her publications have focused on social and political issues revealed in the work of artists, both male and female, from the modernist period to today. Her many books—among them Representing Women (1999), The Body in Pieces: The Fragment as Metaphor of Modernity (1989), Women, Art, and Power and Other Essays (1988), and The Politics of Vision: Essays on Nineteenth-Century Art and Society (1989)—have directed and expanded dialogue among art historians on the nature of viewing and have broadened the scope of our interpretation of the role of art and artists in society.

As usual, Nochlin’s scholarly output is prodigious. This year she published Bathers, Bodies, Beauty: The Visceral Eye, which begins with an examination of Auguste Renoir’s The Great Bathers and then explores representations of the nude (and often female) body in nineteenth- and twentieth-century painting. Thames and Hudson is publishing her collected essays on Courbet next year, with a new introduction.

Though her scholarship has been wide ranging, she is perhaps best known outside academia for her influential essay “Why Have There Been No Great Women Artists,” published in ARTnews in January 1971. The jury for CAA’s Distinguished Lifetime Achievement Award for Writing on Art, which honored Nochlin earlier this year, notes, “Her role in introducing feminist analysis into the field is well known; what art historian today does not know her essay “Why Have There Been No Great Women Artists?” as the founding moment of this methodological shift?”1 Ann Lani writes retrospectively, “Her underlying plea was for a closer evaluation of the social structures surrounding the production of art, ‘be they art academies, systems of patronage, mythologies of the divine creator, artist as he-man or social outcast.’”2

In addition to her work as a scholar and teacher, Nochlin has organized many important exhibitions. Her curatorial work began with Realism Now at the Vassar College Art Gallery in 1968. Women Artists: 1550–1950, curated with Anne Sutherland Harris, was held in 1976 at the Los Angeles County Museum of Art; a catalogue of the same title was coauthored by both scholars. With Sarah Faunce, Nochlin helped to organize Courbet Reconsidered at the Brooklyn Museum in 1988, which traveled to the Minneapolis Museum of Fine Arts. Nochlin is now curating, with Maura Reilly, an exhibition for the Brooklyn Museum entitled Global Feminisms, which will consist of work by contemporary women artists from around the world. She is also organizing a show about old age, called False Teeth, with the British curator James Putnam.

Nochlin has been involved with CAA for many years, serving on the Board of Directors from 1971 to 1974; she was also chair of the Subcommittee on the Status of Women during that time. She was a member of the editorial board for The Art Bulletin four times between 1971 and 1993. Nochlin received the Arthur Kingsley Porter Prize for her article “Gustave Courbet’s Meeting: A Portrait of the Artist as a Wandering Jew” in The Art Bulletin in 1968 and the Frank Jewett Mather Award for art criticism in 1977. She also was honored by CAA’s Committee on Women in the Arts in 1998.

Nochlin has lectured in the US and internationally since the early 1970s, and a symposium, entitled “Self and History,” was held in her honor at the IFA in 1999. That same year she gave the Oxford Lectures at Wellesley College, speaking on modern portraiture. Thirty years after raising the question, Nochlin returned to the issue of women artists when she presented her paper, “Why Have There Been No Great Women Artists? Thirty Years Later” as part of a conference at Princeton University entitled “Women Artists at the Millennium.” In 2002, she conducted a seminar on “Realism, Then and Now” at the Max Planck Institute in Berlin and delivered the Norton Lectures at Harvard University (which also gave her an honorary doctorate) and the keynote address at the American Academy of Arts and Letters Annual Induction and Award Ceremony, both in 2005.

The recepient of numerous fellowships and prestigious awards, Nochlin received one of the three Clark prizes in 2006 for excellence in art writing from the Sterling and Francine Clark Art Institute. She will give the Charles Homer Haskins Prize Lecture at the annual meeting of the American Council of Learned Societies in May 2007, and will receive an honorary doctorate from Hebrew University next year.