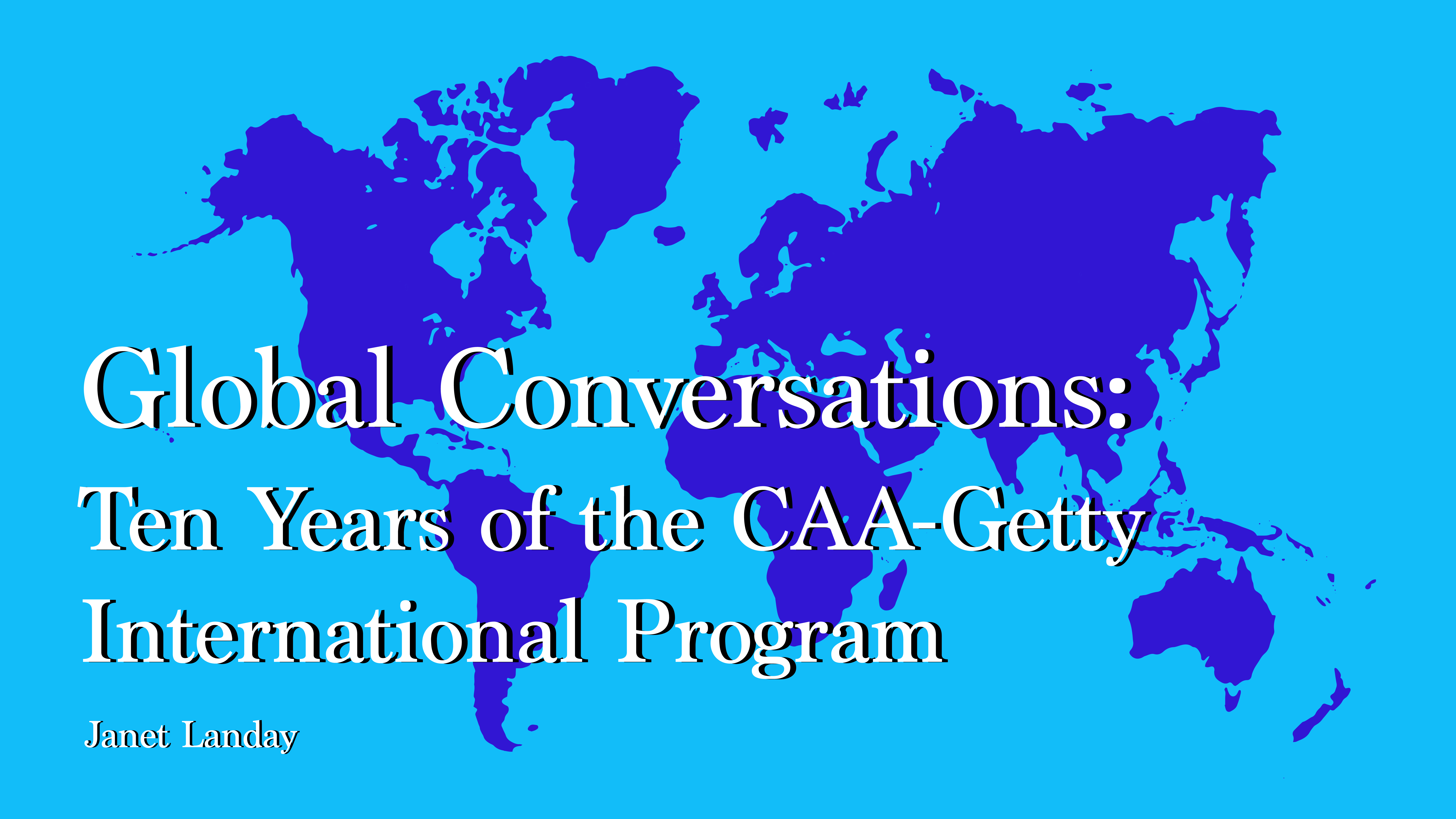 I am delighted to introduce this publication commemorating the first ten years of the CAA-Getty International Program, a milestone in the larger history of CAA (College Art Association). There is a meaningful symmetry to the timing of this anniversary: CAA received its first international program grant from the Getty Foundation in 2011, exactly one hundred years after the 1911 founding of the association. When the first CAA-Getty program was convened in 2012, it took place during CAA’s Centennial conference. Thus, if the United States was the focus of CAA’s first hundred years, the world is fast becoming the focus of our second century.

Since its inception, CAA has included international members, though for most of its history these have been scholars and artists from Western Europe and Canada. It is only in the late twentieth century, in sync with a growing globalization in society at large, as well as important scholarship and activities contributed by an increasing number of CAA members, that the organization began to broaden its interest in a larger, geographically diverse audience. The significant leap in CAA’s involvement and contributions to internationalizing the field, however, would not have happened without the visionary leadership of the Getty Foundation. Beginning under Deborah Marrow’s directorship and continuing today under Joan Weinstein, the Getty Foundation has recognized and championed the rich artistic heritages of the world and the concomitant value of including scholars of these cultures in all research and exploration of their histories. We are enormously grateful to the Foundation for its vision and leadership and for supporting CAA in developing this significant program and maintaining it each year.

As you will read in the pages that follow, the CAA-Getty International Program grew out of an initial effort by the National Committee for the History of Art (NCHA) under the leadership of Frederick M. (Rick) Asher, to bring scholars from underrepresented countries to the CAA Annual Conference. We remain indebted to NCHA for supporting the CAA-Getty International Program through annual grants to provide honoraria for the CAA members serving as hosts for our international colleagues. And we are particularly grateful to Rick Asher, whose recent death is a profound loss to our community. Rick’s personal commitment to the program, his vast knowledge of South Asian art (which led directly to participation in the CAA-Getty program by scholars from this region), and his generosity of spirit have benefited us all. We will miss him deeply.

It takes a village to create a global community. I wish to thank my predecessors at CAA, especially Linda Downs, under whose leadership the association initiated the CAA-Getty International Program, as well as CAA’s board presidents and directors throughout the past ten years, for their commitment to becoming a more inclusive community. A great deal of support has been provided by CAA staff members, who have masterfully assisted in managing and coordinating the activities of the program each of the past ten years. We have been fortunate to be guided in our work by three outstanding program officers at the Getty Foundation: Anne Helmreich, Elizabeth (Cassie) Mansfield, and Miguel de Baca. Many US-based CAA members have made enormous contributions to the program by serving as hosts each year, devoting their time and expertise to welcoming the CAA-Getty participants into the CAA community. In particular, the chairs of CAA’s International Committee have been invaluable partners in achieving the goals of the program.

There is no doubt that the CAA-Getty International Program has been as successful as it is because of the remarkable work of Janet Landay, who has directed the program since it began. She has brought to this work a wonderful combination of intellectual curiosity, creativity, and personal warmth to form a unique community of global scholars. Her personal investment in every program participant has ensured that each of them has reaped the greatest possible benefits from their experiences. As a result, CAA’s roots in international activities are strong and deep. The association will be forever grateful for her contributions.

Finally, I want to thank the alumni of the CAA-Getty International Program: for their interest in CAA, for their dedication to forging an international scholarly community, and for their scholarly contributions to the field. A core strength of the CAA-Getty International Program is its work to unite scholars from the United States with these scholars from underrepresented countries. In its first ten years, the program has brought together 135 scholars from fifty countries with over sixty US-based CAA members in active discussions about the field, in addition to the hundreds of scholars who attended the various colloquiums and conference sessions. As we move forward, our goal is to increase the number of people engaged in these discussions and to continue to bridge geographical distances with shared explorations of mutual interests. In sum: may the global conversations continue!