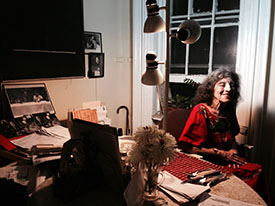 “Communing with Dore Ashton” by Michael Corris has just been published at the open-access Art Journal Open. Corris, an artist and author based in Dallas, writes that Ashton, who died on January 30, was “one of the most energetic, widely published, and politicized American writers on art, and one of the chief proponents of the artists of the New York School (she decried the label Abstract Expressionism).” In addition to Corris’s personal memories of Ashton and their friendship, the project includes the audio and transcribed text of their 2011 conversation about Ashton’s experiences in New York art world during the 1950s and 1960s. Also included is a 2015 film by the artist Alfredo Jaar, Dore Ashton, you know, which features Ashton speaking candidly about her life, writing career, politics, and relationships with artists and writers, among them Harold Rosenberg, Philip Guston, and Louise Bourgeois. Recent photographs by Madeline Djerejian and Polly Bradford-Corris portray Ashton in her working and living spaces in New York City and Springs, Long Island.