The CAA Committee on Women in the Arts (CWA) Winter Picks include exhibitions and events that explore language through form, abstraction, the archive, and narrative. The artists included in this season’s picks investigate language and how it shapes our vision and experience of the world. They also reveal the systems of power embedded within language and how it often acts as a mediator.

Put It This Way: (Re)Visions of the Hirshhorn Collection

Put It This Way includes almost a century of work from fifty women and nonbinary artists in the Hirshhorn’s collection. The exhibit presents a range of media from the twentieth and twenty-first centuries, with a particular emphasis on the Hirshhorn’s mission to highlight global voices.

An Improvisation of Form

Language and invented vocabulary made up of geometric shapes, marks, and colors are central to Caroline Kent’s practice. Her work challenges the viewer to consider how the indecipherable might play a role in their understanding of the world.

The Age of Roe: The Past, Present, and Future of Abortion in America

Conference: “The Age of Roe: The Past, Present, and Future of Abortion in America”

This two-day conference at Harvard Radcliffe Institute will explore how Roe v. Wade and its aftermath shaped the United States and the world beyond it for nearly half a century. The conference will include lectures and panel discussions from experts in constitutional law, historians, health policy advocates, and other scholars. An accompanying exhibition curated by Mary Ziegler, Martin Luther King Jr. Professor of Law, UC Davis School of Law, will also be on view through March 4, 2023.

re:collection includes the work of five artists—Ali Cherri, Nicole Cherubini, Lily Cox-Richard, NIC Kay, and SANGREE—whose work reconsiders the Tufts University collection. Specifically, the artists explored about 200 objects from the fifth century BCE to the seventh century CE, including early Greco-Roman ceramics, stone carvings, pre-Columbian vessels, jewelry, and textiles. The exhibition has a range of approaches, from performance and installation to sculpture and painting. 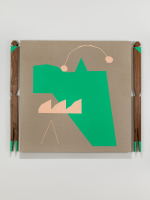