For Third Year in a Row, Trump Administration Threatens to Cut NEA and NEH Funding 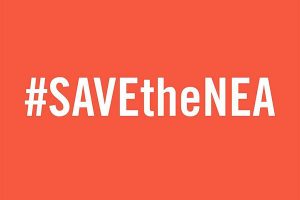 Trump unveiled a $4.75 trillion budget—the largest in federal history—on March 11, but details about his plans for the NEA and NEH were announced yesterday in the administration’s full proposal. According to the documents, the NEA’s budget is marked at $29 million and the NEH’s is at $38 million—which the proposal describes as “sufficient funding for orderly termination of all operations over two years.”

Since 2017, Trump has been vocal in his desire to eliminate the two agencies entirely. In 2019, each of the agencies was allocated a budget of $155 million, despite similar calls for elimination in 2018 and 2019. The US federal budget for 2020 will ultimately be decided by Congress.

We’ll be fighting back again this year and hope that you do, too. The most effective way to make your voice heard is through your local representatives. Call. Email. Write letters.

Urge your representatives to sign on to this NEA funding letter and this NEH funding letter, which ask for budgets of $167.5 million for each agency.