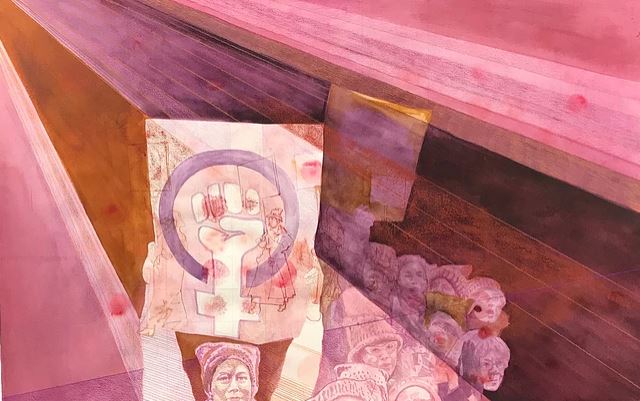 A work by Skylar Smith on view in Feminist Expressions at Kaviar Gallery through January 19, 2019.

CAA’s Committee on Women in the Arts selects the best in feminist art and scholarship to share with CAA members on a monthly basis. See the picks for January below.

Kentucky isn’t exactly thought of as the feminist mecca. But seventeen invited artists from around this Southern state present poignant artwork around highly charged social topics such as immigration, femicide, media and materiality, food and animal abuse, astrology, pollution and more. Whitney Withington’s intimately hand-crafted journals feature vintage vernacular photography from Appalachia, reversing the trend of invisibility of African American women in Appalachian imagery and literature. Dijana Muminovic, an artist who survived the Bosnian War, exhibits a keen and affecting photograph reflecting Bosnian women and their search for separated loved ones. Diane Kahlo pays homage to the disappeared/murdered young women of Ciudad Juárez, Mexico’s via her small, richly hued portraits with an altar adorned with sequined skulls and ceramic roses.  Through her sensual quilted works, Jennifer Hart combines the warmth of fabric with the brashness of pornography to re-humanize the dehumanized nude female body. The 17 artists exude a stellar combination of aesthetic and the boldness and excellence necessary to make real change, significantly in a lesser recognized area.

Bringing together more than 350 objects, this retrospective exhibition of the Bauhaus-trained weaver, whose 1965 text On Weaving has been a standard-bearer in the realm of fiber arts. In Open Letter, a wall-hanging from 1958, Albers produced a cacophony of patterns using only black, white, and a minimal amount of copper-colored thread. Mathematically precise the tapestry scintillates with a seemingly improvisatory energy. Each of the works on display merit close and persistent looking—their gifts both readily available and hidden in the warp and weft of Albers’ keen compositional intelligence. Of particular interest is the fact that the curators have gathered together source material that informed Alber’s On Weaving, and thus one also gets the picture of Albers as inveterate magpie, collector, and cultural connector.

In 1939 Albers wrote about material, and the benefits of artistic perseverance: “But most important to one’s own growth is to see oneself leave the safe ground of accepted conventions and to find oneself alone and self-dependent. It is an adventure which can permeate one’s whole being. Self-confidence can grow. And a longing for excitement can be satisfied without external means, within oneself; for creating is the most intense excitement one can come to know.” The sagacity that comes with self-sufficiency is on full display here, even if Albers is still only mentioned in surveys of Western Art History as a footnote to her husband’s artistic and teaching career. Hopefully this exhibition and its accompanying catalog go a ways toward changing that.

British ceramicist artist Claire Partinginton’s work flips the typical script of the Seattle Art Museum’s Porcelain Room for a whole two years, demonstrating a strong sense of acknowledgement of institutional limitations. Taking Tea is the first ever installation in the visitor favorite Porcelain Room since its debut in 2007. The Porcelain Room includes more than 1,000 European and Asian porcelain pieces from SAM’s collection grouped to evoke porcelain as a treasured commodity between the East and the West. This is precisely where the artist’s inspiration lies, within the European tradition of appropriation and reinterpretation or misinterpretation of “exotic” styles. She writes, “I like the idea of getting it slightly wrong and the bluffing and ‘cobbling together’ of styles that has resulted in some fantastic historical objects.” The results are familiarly finely crafted ceramics of pristine, richly adorned figures with contemporary details and jolting couplings, an installation referencing Baroque painting and European porcelain factories, as well as a panel mounted with fragments from 17th- and 18th-century shipwrecks.  A group of four in fancy attire pose as if “taking tea” while a single figure lay, stomach down, in the middle of their fine affair, reflecting the troubling aspects of the era they depict, yet resonating with the still continued issues with international trade and economy. It’s sure to be a trip!