Countering Feminist Indifference: Notes from the Women’s Caucus for Art 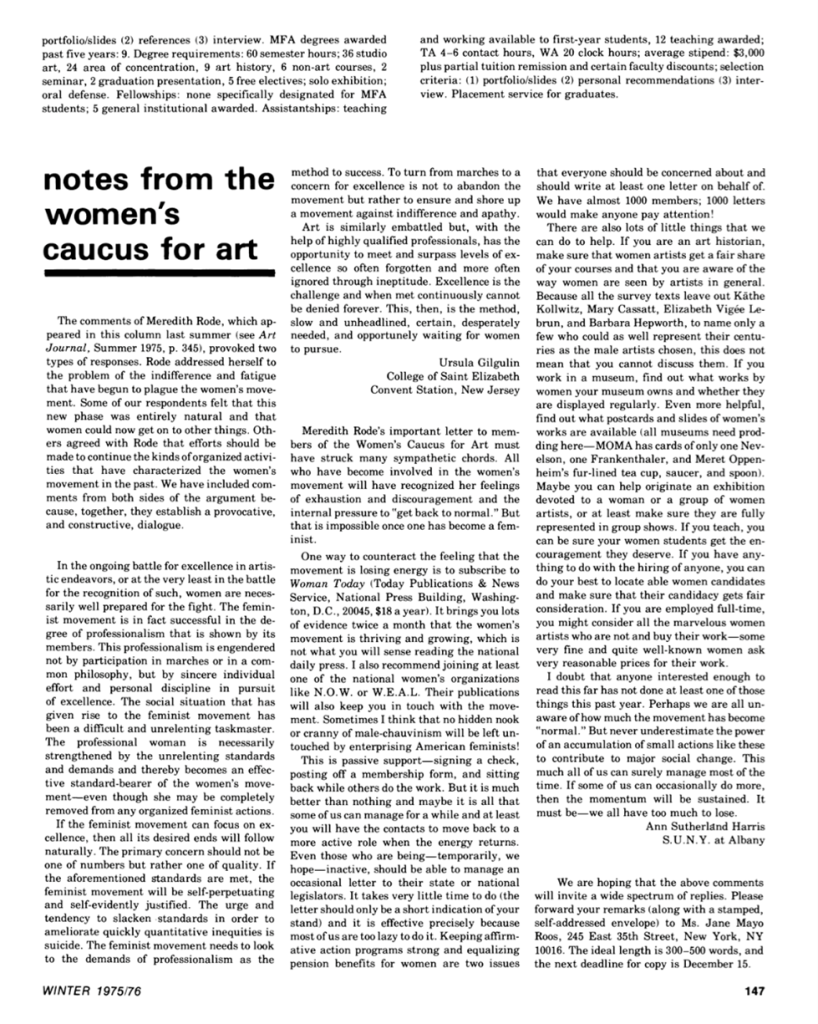 “Notes from the Women’s Caucus for Art (WCA),” a column featured in Art Journal during the 1970s, created an important forum for critical debates in the feminist art movement. In Summer 1975, for example, Meredith Rode shared evidence of fatigue with the feminist struggle in her letter “The High Price of Indifference.” Rode’s letter generated numerous responses in the winter 1975 issue, including Ann Sutherland Harris’s practical advice on how to counter this exhaustion.

The first President of WCA advocated both passive and activist gestures, ranging from sending a check to the National Organization of Women to pressuring local museums to display works by women in their collections, organizing group shows of women artists, mentoring female students, and buying women’s art.

This snapshot of WCA’s essential role in feminism art and activism reminds us how we can individually act to demand equity while working in conjunction with the collective efforts of essential national organizations, such as WCA and CAA. Read the full text below.

Biography of post author: Joanna Gardner-Huggett is an Associate Professor of History of Art and Architecture at DePaul University and Chair of the Committee on Women in the Arts. She teaches courses on twentieth-century art and feminist theory, while her research focuses on the intersection between feminist collaboration and arts activism and has been published in numerous journals and anthologies. Joanna’s most recent scholarship explores the history of the Chicago based women artists’ collectives Artemisia Gallery in Chicago (1973-2003), ARC Gallery (1973-present), and Sapphire and Crystals (1987-present).

The comments of Meredith Rode, which appeared in this column last summer (see Art Journal, Summer 1975, p. 345), provoked two types of responses. Rode addressed herself to the problem of the indifference and fatigue that have begun to plague the women’s movement. Some of our respondents felt that this new phase was entirely natural and that women could now get on to other things. Other agreed with Rode that efforts should be made to continue the kinds of organized activities that have characterized the women’s movement in the past. We have included comments from both sides of the argument because, together, they establish a provocative, and constructive, dialogue.

In the going battle for excellence in artistic endeavors, or at the very least in the battle for the recognition of such, women are necessarily well prepared for the fight. The feminist movement is in fact successful in the degree of professionalism that is shown by its members. This professionalism is engendered not by participation in marches or in a common philosophy, but by sincere individual effort and personal discipline in pursuit of excellence. The social situation that has given rise to the feminist movement has been a difficult and unrelenting taskmaster. The professional woman is necessarily strengthened by the unrelenting standards and demands and thereby becomes an effective standard-bearer of the women’s movement—even though she may be completely remove from any organized feminist actions.

If the feminist movement can focus on excellence, then all its desire ends will follow naturally. The primary concern should not be one of the numbers but rather one of quality. If the aforementioned standards are met, the feminist movement will be self-perpetuating and self-evidently justified. The urge and tendency to slacken standards in order to ameliorate quickly quantitative inequities is suicide. The feminist movement needs to look to the demands of professionalism as the method to success. To turn from marches to a concern for excellence is not to abandon the movement but rather to ensure and shore up a movement against indifference and apathy.

Art is similarly embattled but, with the help of highly qualified professionals, has the opportunity to meet and surpass levels of excellence so often forgotten and more often ignored through ineptitude. Excellence is the challenge and when met continuously cannot be denied forever. This, then, is the method, slow and unheadlined, certain, desperately needed, and opportunely waiting for women to pursue.

Meredith Rode’s important letter to members of the Women’s Caucus for Art must have struck many sympathetic chords. All who have become involved in the women’s movement will have recognized her feelings of exhaustion and discouragement and the internal pressure to “get back to normal.” But that is impossible once one has become a feminist.

One way to counteract the feeling that the movement is losing energy is to subscribe to Women Today. It brings you lots of evidence twice a month that the women’s movement is thriving and growing, which is not what you will sense reading the national daily press. I also recommend joining at least one of the national women’s organizations like N.O.W. or W.E.A.L. Their publications will also keep you in touch with the movement. Sometimes I think that no hidden nook or cranny of male-chauvinism will be left untouched by enterprising American feminists!

This is pass support—signing a check, posting off a membership form, and sitting back while others do the work. But it is much better than nothing and maybe it is all that some of us can manage for a while and at least you will have the contacts to move back to a more active role when the energy returns. Even those who are being—temporarily, we hope—in active, should be able to manage an occasional letter to their state or national legislators. It takes very little time to do (the letter should only be a short indication of your stand) and it is effective precisely because most of us are too lazy to do it. Keeping affirmative action programs strong and equalizing pension benefits for women are two issues that everyone should be concerned about and should write at least one letter on behalf of. We have almost 1000 members; 1000 letters would make anyone pay attention!

There are also lots of little things that we can do to help. If you are an art historian, make sure that women artists get a fair share of your courses and that you are aware of the way women are seen by artists in general. Because all the survey texts leave out Käthe Kollwitz, Mary Cassatt, Élisabeth Louise Vigée Le Brun, and Barbara Hepworth, to name only a few who could as well represent their centuries as the male artists chosen, this does not mean that you cannot discuss them. If you work in a museum, find out what works by women your museum owns and whether they are displayed regularly. Even more helpful, find out what postcards and slides of women’s works are available (all museums need prodding here—MOMA has cards of only one Nevelson, one Frankenthaler, and Meret Oppenheim’s fur-lined tea cup, saucer, and spoon). Maybe you can help originate an exhibition devoted to a woman or a group of women artists, or at least make sure they are fully represented in group shows. If you teach, you can be sure your women students get the encouragement they deserve. If you have anything to do with the hiring of anyone, you can do your best to locate able women candidates and makes sure that their candidacy gets fair consideration. If you are employed full-time, you might consider all the marvelous women artists who are not and buy their work—some very fine and quite well-known women ask very reasonable prices for their work.

I doubt that anyone interested enough to read this far has not done at least one of these things this past year. Perhaps we are all unaware of how much the movement has become “normal.” But never underestimate the power of an accumulation of small actions like these to contribute to major social change. This much all of us can surely manage most of the time. If some of us can occasionally do more, then the momentum will be sustained. It must be—we all have too much to lose.

In 1972, CAA founded its first committees devoted to women in the arts. As a part of this yearlong 50th anniversary celebration, we are sharing historic materials from CAA members and archives that intersect with feminism at the organization, including CAA’s Committee on Women in the Arts (CWA) and our Affiliated Societies, Women’s Caucus for Art (WCA) and The Feminist Art Project (TFAP).

This celebration culminates in a program and reception at Boston University’s Joan and Edgar Booth Theatre on Friday, September 23, 2022. This program will reflect upon the incredible history of feminist pioneers at the organization while looking toward a more inclusive, equitable future through the continued work of the CWA. The members of CWA are carrying the torch of feminism during this crucial time of precarity for women’s rights.

Over the next couple months, visit this site (CAA News) and our social media pages to explore more about this history and items from our archives.