Karen Barzman from Harvard University’s Center for Italian Renaissance Studies in Cambridge, Massachusetts, has been appointed visiting professor at Villa I Tatti in Florence, Italy, for the fall 2013 semester. She will work on a book project called “The Limits of Identity: Venice, Dalmatia, and the Representations of Difference.”

Elisabeth Agro, Nancy M. McNeil Associate Curator of American Modern and Contemporary Crafts and Decorative Arts for the Philadelphia Museum of Art in Pennsylvania, has accepted a 2013 award from the Craft Research Fund by the Center for Craft, Creativity, and Design, based in Asheville, North Carolina. The $7,000 in funds will help expand, envision, and prototype innovative structures for disseminating craft knowledge and fostering scholarly social networking through her project with Namita Gupta Wiggers, called Critical Craft Forum.

Sonya Clark, chair of craft/material studies in the School of the Arts at Virginia Commonwealth University in Richmond, has received a 2013 award from the Craft Research Fund by the Center for Craft, Creativity, and Design, based in Asheville, North Carolina. The $14,955 award will support Clark’s The Hair Craft Project, which investigates the relationship between textile arts and the craftsmanship of contemporary African American hair braiders within the localized intercultural context of Richmond.

Jessica Cochran, curator of exhibitions and acting assistant director of the Center for Book and Paper Arts at Columbia College Chicago in Illinois, and Melissa Potter, associate professor in the Interdisciplinary Arts Department at Columbia College Chicago, have been named 2013 Craft Research Fund recipients by the Center for Craft, Creativity, and Design, based in Asheville, North Carolina. Their $7,642 award will support research for Social Paper, an exhibition and its accompanying catalogue charting the evolution of the art of hand papermaking in relation to the discourse on socially engaged art, with special attention to craft, labor, community, and site-specificity.

William L. Coleman, a PhD candidate in the history of art at the University of California, Berkeley, has been awarded the second annual Sir Denis Mahon Essay Prize for unpublished work on an early modern topic by a scholar under 30. The award comes with a £1,000 prize and the invitation to present the winning project, “‘To live in accord with nature’: Rubens’s Houses and the Construction of Neostoic Leisure,” as a lecture at the Ashmolean Museum in Oxford, England.

Jane Fine has completed an artist’s residency at the Sam and Adele Golden Foundation for the Arts. She was at the foundation’s studio center in Berlin, New York, from September 15 to October 12, 2013.

Lindsay Henry, a doctoral student in the Institute of Fine Arts at New York University, has been accepted as a participant in the 2014 Art & Law Program, a semester-long seminar series to he held in New York that has a theoretical and philosophical focus on the effects of law and jurisprudence on cultural production and reception.

Michael Iauch, an artist based in Durham, North Carolina, has been named a 2013–14 recipient of the Franklin Furnace Fund. Since 1985 the fund has helped artists to prepare major works of performance art.

Sue Johnson, professor of art at St. Mary’s College of Maryland in St. Mary’s City, has been awarded two residency fellowships in 2014: one for the Frans Masereel Centrum in Kasterlee, Belgium, and the other for the Tyrone Guthrie Centre in Annaghmakerrig, Ireland.

Joyce Yu-Jean Lee, an artist who lives and works in Baltimore, Maryland, has received a 2013–14 award from the Franklin Furnace Fund. Since 1985 the fund has helped artists to prepare major works of performance art.

Elizabeth Perrill, assistant professor of art history at the University of North Carolina, Greensboro, has accepted a 2013 award from the Craft Research Fund, administered by the Center for Craft, Creativity, and Design, based in Asheville, North Carolina. She will work on “Burnished by History: The Legacies of Maria Martinez and Nesta Nala in Dialogue,” a scholarly article and companion artists’ interview focused on the legacies of two ceramists, Maria Marinez from the United States and Nasta Nala from South Africa. 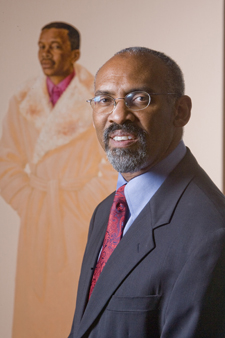 Richard J. Powell, John Spencer Bassett Professor of Art and Art History at Duke University in Durham, North Carolina, has been awarded the Smithsonian Institution’s Lawrence A. Fleischman Award for Scholarly Excellence in the Field of American Art History.

Marion Wilson has completed an artist’s residency at the Sam and Adele Golden Foundation for the Arts. She was at the foundation’s studio center in Berlin, New York, from September 15 to October 12, 2013.

Alice Pixley Young has participated in a 2013 residency at the Jentel Artist Residency Program, located in Banner, Wyoming.