A Fair Use Code Changes Practice in the Visual Arts: The Numbers

How much difference has the release of the College Art Association’s Code of Best Practices in Fair Use for the Visual Arts made so far? Even a few months after the release in February 2015, there was significant change in the field’s practice.

A survey of more than two thousand members of the College Art Association, starting seven months after the launch of the Code and winding up in January 2016, was analyzed by American University faculty and graduate students. Here’s what we know:

By and large, and as expected, patterns documented in a 2013 survey remained in place in the few months after the CAA Code was launched. The great majority of visual arts professionals still default to permissions, even though they have some experience of fair use when permissions processes fail. That choice is often costly. About a third of the respondents continue to report problems with avoiding projects, abandoning existing projects, and serious delays of more than three months, because of permissions.

But as well, we saw some real changes.

These changes, which occurred after only months of experience with the Code, happened because of widespread and networked knowledge.

o   Two-thirds of respondents said they had heard of the Code before they took the survey.

o   Most heard from multiple sources, but CAA was the most common source, whether through the conference, a newsletter or the website.

o   A third of those who had heard about it had shared the news with someone else—a gesture that shows trust in the information, and confidence that it will be useful. 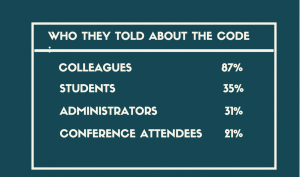 o   Mid-career and veteran members of the field were much more likely to have heard about it than the newer entrants.

This is only the beginning, though. There’s still a lot to do.

The survey results provide some next steps:

For more information about the Code, including informational videos, infographics, and frequently asked questions, visit the Fair Use page on the CAA website.

Originally published by the Center for Media and Social Impact in the School of Communication at American University.