Statement on the US President’s FY2018 Budget Proposal 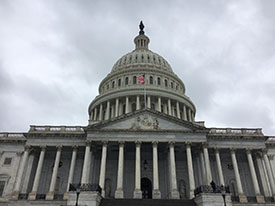 Today the US President released his proposal for 2018 federal budget – it envisions transferring additional billions of dollars to the Department of Defense, Veterans Affairs, and Homeland Security from many important domestic programs such as the Environmental Protection Agency, education, and legal services. As expected, the budget also calls for the complete elimination of the Corporation for Public Broadcasting, National Endowment for the Arts, National Endowment for the Humanities, and 16 other federal agencies. CAA was one of the first national organizations to speak against these cuts.

Read the statement against these cuts that CAA released on January 23, 2017.

As educators, art historians, artists, curators, museum directors, designers, scholars, and other members of the visual arts community we must act to defend the role of arts and humanities in our society. The budget process is long and ultimately controlled by the US House and Senate.  Earlier this week, CAA traveled to Washington for Humanities Advocacy Day to meet with many congressional offices to discuss the importance of continued NEA and NEH funding. We will return again next week to do the same for Arts Advocacy Day.

In addition, CAA assembled an Arts and Humanities Advocacy Toolkit with information on how to contact your representatives in Congress to voice your support for the NEA and NEH and the many quality programs they fund. Call their offices. Email them. Attend Town Halls. You can learn how these agencies support activities in your area here: funded by the NEA and funded by the NEH.  Be sure to let your representatives know of the impact of the arts and humanities in your districts. Spread the word to your colleagues and friends.

Despite the White House’s opposition to continued funding for the NEA and NEH, there is sufficient reason to believe that many members of the US House and Senate will support a budget that includes continued funding for these agencies.  I ask our members to join in the effort to make sure all members of Congress knows the importance of the work done by these agencies.