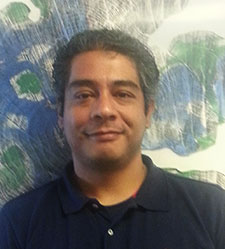 The next in a series of interviews with staff members is a conversation with Fernando Zelaya, CAA controller.

How long have you worked at CAA?

I have been at CAA since December 2012—four years, four months.

What do you do at CAA?

I am the controller, in the Finance Department.

What does CAA mean to you?

CAA to me is a medium for all art scholars to come together and be a part of a community. It’s also a place to share with each other, and to teach each other.

Can you talk about one of your favorite member moments?

Since I interact with members mostly at the conference, I’ll tell one story here and add another in the conference question later on. My favorite member moment was when I helped an elderly member who reminded me of my grandmother. She had such vigor and enthusiasm and seemed genuinely happy to be at the conference. That made my day.

What do you like best about the arts and working in the arts?

What I like best is meeting and working with artists. In my daily life and my earlier years, I had never interacted with artists. Now, having worked for the Dia Art Foundation as well as CAA, I have learned to appreciate art more than I used to, because now I better understand the meaning behind the art.

Do you have a favorite moment from the Annual Conference?

Once at registration I was berated by a flustered member who was late to a session and wanted to get his ticket quicker than was possible. The nice moment came when he returned to my booth after the session was over and gave me a sincere apology.

I think that art and sports have more in common than people think. Both require years of hard work to perfect, and both need a combination of grace and power to achieve the objective of the piece (in art) or to score (in a game). It takes grace to stop a soccer ball or save a shot coming toward you at fifty to sixty miles per hour, or to hit a baseball with a bat when both objects are about three inches wide. That kind of skill, to me, is just as beautiful as a stroke of a brush or a poem that can draw a tear or bring about a smile.

You’re also interested in science fiction. Are there any new television shows or movies that have piqued your interest?

Science fiction is my favorite type of television show or movie. My favorite is Doctor Who, because of its sheer brilliance and how it has evolved over the last fifty-three years. The series even survived being off the air, only living in print and audio for almost ten years. The best new show I have seen this year is The Man in the High Castle, which takes us to a world where the Axis powers won WWII and have divided the United States among them. I am also a big fan of the Marvel and DC movies. I love these types of shows or movies because it is fun to immerse myself for a couple of hours—okay, maybe more than a couple—and go somewhere magical or even quite insane.

Filed under: myCAA, People in the News, Staff —