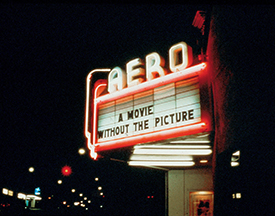 Marquee for A Movie Will Be Shown Without the Picture, Aero Theatre, Santa Monica, California, December 7, 1979 (photograph by Louise Lawler)

An appropriately deadpan announcement, now in the collection of the Metropolitan Museum of Art, for Louise Lawler’s cinematic event A Movie Will Be Shown Without A Picture (1979), reproduced the work’s title on a flat black card. Indeed, this is what viewers to the Aeron Theater in Santa Monica would have encountered on the night of Lawler’s event: a film shown without its flickering image. We might understand Lawler’s gesture as a riposte to Laura Mulvey’s influential text “Visual Pleasure and Narrative Cinema,” published five years before in the British film journal Screen. The filmic performance deprives audiences of the picture of the chosen film (the film changes with each iteration), instead asking them to rely on sound and soundtrack. Thus viewers are left to imagine and project their own fantasies (if they haven’t seen the film) or cobble together their memories of the film (if they have). As an arm of the programming for Louise Lawler’s retrospective at the Museum of Modern Art in New York, A Movie Will Be Shown Without a Picture will be screened two times.

Usually the curatorial and programming staff at Project Row Houses determine a theme and invite a series of artists to make installations and public programming inside the block of row houses in Houston’s Third Ward. This time Public Art Director Ryan Dennis and artist Simone Leigh cocurated the round to be exclusively for Black Women Artists for Black Lives Matter, a collective group that Leigh founded during her residency at the New Museum last year, and which now has chapters in London, Los Angeles, and Chicago. Performances, installations, platforms for dialogue and activation—these are the things that tie Project Row Houses and Black Women Artists for Black Lives Matter together. What began with an incubation period to get Houston’s chapter of BWA for BLM started, and was inaugurated with a processional performance, is now a full-tilt community platform for building generative ideas and actions for entering into the movement. As if to sum up the sentiments of the current round, one of the row houses is emblazoned with a supergraphic of the following sentiment: “YOU’VE GOTTA LOVE US OR LEAVE US ALONE.”

Katharina Fritsch’s sculpture, which seeks to defamiliarize the familiar and query the boundaries between the natural and the symbolic, will be on view at the Walker Art Museum for the next several months. Animals, religious figurines, body parts, and other objects drawn from the history and fairy tales of her native Germany take one new meanings when color, scale, and materials of everyday objects are altered. The show will include some forty objects, ranging from her early work as a student to her more recent pieces, drawn from the museum’s permanent collection. Katharina Fritsch: Multiples is a companion exhibition to the installation of her monumental, ultramarine blue Hahn/Cock in the Minneapolis Sculpture Garden in June. Described by the artist as “a feminist sculpture,” this work was first displayed on the fourth plinth in Trafalgar Square in the summer of 2013.

At long last, the beloved nineteenth-century French sculptor and feminist art icon Camille Claudel is receiving her due with a museum devoted to her work. Located in the small town of Nogent-sur-Seine, the Musée Camille Claudel is built around the family home where she spent her early adolescence. After a temporary exhibition of her work in 2003 brought over forty thousand visitors to Nogent-sur-Seine (pop. 6,000), it was determined that a museum dedicated to its most famous resident was in order. The Musée Camille Claudel now houses the world’s largest collection of the sculptor’s work. Visitors, who will be gratified to see such well-known pieces as The Waltz and The Gossips, will also be able to discover similarly remarkable works such as Abandon and Fortune. It takes under an hour by train to reach Nogent-sur-Seine from Paris.

The exhibition Power at Sprüth Magers features thirty-seven African American women artists from the nineteenth century until now. Works span fine-art and folk-art traditions covering multiple mediums, including painting, photography, video, sculpture, and installation. The title of the exhibition takes its name from a 1970 gospel song by Sister Gertrude Morgan, a self-taught, musician, poet, artist, and preacher. The works, engaging in issues of race, gender, and class, trace the threads of the craft-based folk traditions to a newer, academically trained generation of artists, depicting the “struggle to establish themselves as equal players on the uneven field of the American republic.”

In a review of the show published in the Los Angeles Times on April 11, 2017, the author Leah Ollman writes, “Artists here treat the physical body and the emblematic body of the nation as contested sites. Historical trauma persists within both, and both serve as ready—if not always willing—vehicles for self-determination.”

Power will also include an installation of over one hundred African American vernacular photographs from the early twentieth century on loan from the Ralph DeLuca Collection. They offer a diverse view into everyday lives of African American women, from images of positive change to difficult scenes of negative stereotyping and violence. Offered as an exhibition-within-an-exhibition, these images from a century ago encourage reflection upon the continued struggles of black lives in America today.

The exhibition We Wanted a Revolution: Black Radical Women, 1965–85 explores the intersections of avant-garde art worlds, radical political movements, and profound social change through photography, sculpture, printmaking, photography, performance, film, and video. Examining the political, social, cultural, and aesthetic priorities of women of color during the emergence of second-wave feminism, this exhibition is the first “to highlight the voices and experiences of women of color—distinct from the primarily white, middle-class mainstream feminist movement—in order to reorient conversations around race, feminism, political action, art production, and art history in this significant historical period.”

A host of events accompanied the exhibition. In addition to the DJ reception on April 20, which paid tribute to the revolutionary music of black women, the week-long opening celebration also included a symposium on April 21, a Julie Dash film marathon on April 22, and a Black Lunch Table on April 23.