In her first major museum retrospective, artist Julia Jacquette unveils two exhibitions, Unrequited and Acts of Play and Playground of My Mind, at the Wellin Museum of Art in Clinton, New York. Curated by Tracy L. Adler, the Johnson-Pote Director of the Wellen Museum, Unrequited focuses on commercialized objects of desire, “exposing our seemingly insatiable longing for the ideal.” Known for taking her inspiration from cookbooks and contemporary food magazines, Jacquette presents “these material trappings … often close up, in crisply detailed paintings that both profess and resent such desires and the complications they present personally, socially, and culturally.”

“I feel the gender of food is an under discussed topic. The kind of food images I use are a kind of highly styled food, that I think was and is targeted at women—food that looks like it is achieving a kind of domestic perfection,” Jaquette said in an interview with Maxwell Williams.

Running simultaneously, Playground of My Mind is a graphic memoir based on the “adventure playgrounds” of New York City and Amsterdam during the 1970s. “These structures encouraged constructive, imaginative play and gave renewed life to utopian notions of American and European modernist architecture.” Jacquette’s father codesigned one for Central Park. The body of work, comprised of gouache drawings and an illustrated artist book, explores their influence on Jaquette’s aesthetic.

The exhibit also includes space for community-organized, play-oriented projects based on the project. A schedule is available online. 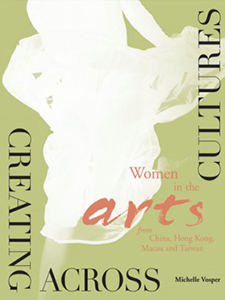 “These courageous women often had to defy cultural expectations in order to heed their artistic drive. Their artworks delve into the social realities of their times, and their personal stories provide an intimate portrait of the historical trajectory of Greater China over three generations.”

Last year, Julia Meltzer (curator and director of the Clockshop) invited twelve artists and writers to mine the archives of Pasadena-based sci-fi writer Octavia E. Butler, who had passed away some ten years before. Because Butler gave her archive to the Huntington, much of the research for the new works and writings occasioned by Meltzer’s show happened in the Huntington’s library. Entitled Radio Imagination, that exhibition was a meditation on some of the key themes in Butler’s works (disenfranchisement, survival, the power of the mind) as well as the tricky business of re-presenting stories, documents, and a life that remains under recognized.

Now the Huntington has entered the fray with their own exhibition, this one tightly focused on the contents of Butler’s archives. It includes some of the early writings (and a really wonderful drawing of two horses) the author composed while still a child, as well as drafts of books and stories. Butler had a habit of color coding her documents, making notes with brightly colored highlighters—so these pieces of paper often have a striking visual quality. But it is the words, the prose, and the bare-bones reflections of an author working arduously to always do better that are really the stars here. In a letter sent to her mother from a pit of despair while at (what would be the first of many visits to) the Clarion Science Fiction and Fantasy Writer’s Workshop, Butler beats herself up for being blocked, and for not getting more accomplished. For a writer who was fairly private while she lived, these documents can be a revelation regarding the vulnerabilities of process, the messiness of affect, and the rigor of a brilliant mind and storyteller.

“Bara! Bara! Bara!” is the cry that vendedores make in the markets in Itzapalapa, one of the sixteen boroughs of Mexico City, to lure in buyers with the promise of cheap (“barato”) goods. For her solo exhibition at the Dallas Contemporary, Mexico-based artist Pia Camil transforms some of the most ubiquitous materials from these markets, T-shirts, into expansive fields of color. These shirts are often made in Mexico (and many other countries outside the US), sold to US consumers, and then, after trickling through second-hand stores, they are eventually shipped by the tonnage back to Mexico and Central America, where they are sold to new markets. The global circuit of vestments is well-trod ground in contemporary art, one example being Shinique Smith’s Bale Variants series (2009–14). But Camil’s project is differently expansive, both formally and conceptually.

Suspended from the vast ceiling of the Dallas Contemporary’s warehouselike space, Camil’s t-shirt sheets look like low-hanging clouds, droopy body parts (bellies, breasts, asses), or, in a call-back to the site of acquisition, the informal coverings of outdoor markets. Because each of these works is called Divisor Pirata, they bear some relation to Lygia Pape’s Divisor, first performed in 1967–68. In that performance, participants from the streets of Rio de Janeiro filled in the holes of a large white piece of fabric and then travelled as a communal body through the streets. Indeed, Camil’s sheets are full-up with performance potential: viewers are invited to stick their heads through the neck holes, thus changing their perspective and relationship to these forms. What once operated like a covering now functions as a shifting new ground, rolling and roiling.

After almost fifty years after the groundbreaking show of contemporary black women artists, Where We At, the Brooklyn Museum has organized a landmark exhibition to honor and extend the work of these art activists. As its organizers proudly proclaim, We Wanted a Revolution: Black Radical Women, 1965–85 “is the first exhibition to highlight the voices and experiences of women of color—distinct from the primarily white, middle-class mainstream feminist movement—in order to reorient conversations around race, feminism, political action, art production, and art history in this significant historical period.” Featuring a wide array of media—film, performance, conceptual and video art, as well as painting, sculpture, photography, and print media—We Wanted a Revolution captures the energy and vitality of these critical interventions into the art practices of this formative era. Simply put, this exhibition is a must-see.

In this historic exhibition, the first-ever Nigerian Pavilion at the Venice Biannale, artist Peju Alatise takes the theme “How About NOW?” seriously. Her contribution to the Nigerian pavilion is an installation titled Flying Girls. Made over a three-year period from 2013–16, it is composed of eight black-painted and life-sized figures of girls, standing in a circle, who appear to have sprouted wings. Above them hovers a flock of birds. The work is a clear reference to the ongoing kidnapping and sexual enslavement of the Nigerian girls by Boko Haram. Flying Girls alludes to a character in one of Alatise’s books, a Yoruban girl who has been sold into domestic servitude and who dreams she belongs to no one but herself and can escape her imprisonment through flight.

Alatise, who was trained as an architect and is a renowned poet and novelist as well as a visual artist, is committed to producing works that addresses the social, political, and gender issues facing her country, with particular attention to what womanhood means within these contemporary contexts. She said this of her contribution to the Nigerian Pavilion: “I thought I would give a voice to the most vulnerable, which is the young black girl—especially in Nigeria,” she says. “It’s not necessarily focusing on that label, but the vulnerability of the girl child and the fact we do not have the government, cultural knowledge and aspiration to do something to help the girl child.”