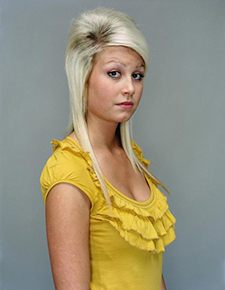 In celebration of Rineke Dijkstra’s recent honor of receiving the prestigious Hasselblad Foundation’s International Award in Photography for 2017, the Stedelijk Museum has mounted a small but excellent curated exhibit of this lauded Dutch artist. Twenty-one photographs and four videos are included in An Ode, which showcases Dijkstra’s masterful technique and remarkable sensitivity to her youthful subjects and the delicate process of their coming of age. As the artist noted, “With young people everything is much more on the surface—all the emotions. When you get older you know how to hide things.” Under her keen eye and deft hand, portraits of adolescence become something intimate and lovely and compelling.

The exhibit, which draws from Stedelijk’s own extensive collection of her work, as well as loans from the artist, is meant to be a celebration as well as an amuse-bouche for later offerings in the season. Later this year, the museum will present Dijkstra’s work Almerisa (1994–2008), a series of portraits that follows the life of a young Bosnian refugee girl from her arrival in the Netherlands to her adulthood.

Acolytes of this contemporary photographer can also see an extensive retrospective of her work at the Louisiana Museum (Copenhagen, Denmark) this fall, and then at the Museum de Pont (Tilberg, the Netherlands) in early 2018. 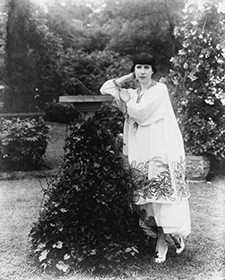 In the first major retrospective of her work, the Turkish artist Fahrelnissa Zeid, a pioneer in the European avant-garde of the 1940s and 1950s, dazzles. Trained in Paris and Istanbul (one of the first women to go to art school there), she produced work that synthesized historical and contemporary Middle Eastern and European artistic practices. Zeid, a princess and Muslim, cut an unusual figure in the midcentury art world. Her oeuvre is astonishingly diverse, ranging from large abstract paintings to smaller figurative pieces, and from traditional materials to new media such as chicken bones, which she painted, cast into polyester resin, and fashioned into stained-glass-like objects.

Zeid’s vibrant and energetic works were widely exhibited and enjoyed critical success, and yet her work fell into obscurity in subsequent decades. Frances Morris, the director of Tate Modern, told the Guardian of the rediscovery of her work on a 2008 trip to Istanbul, saying: “We were stunned to encounter for the first time in our lives, these huge, ornate, decorative, multifaceted, brilliantly coloured, swirling abstract paintings. We’d never seen her work in our lives and we’d never seen anything like it. It was a really exciting moment.” The retrospective of Fahrelnissa Zeid is part of the museum’s stated commitment to showcase artists of the modern era who have been overlooked and underrepresented in the art world.

Writing for Art in America in 1980, the art historian Linda Nochlin made this assessment of Florine Stettheimer’s work: “Florine Stettheimer, the artist, existed in this world, it is true, but still somewhat apart from it––as her painting exists apart from the major currents of her time.” Stettheimer, who was born in Rochester and studied at the Art Student League of New York, is known for her affected paintings (sometimes with accompanying sculptural, scalloped frames), that reflect the comings and goings of her family—most notably her two other sisters—and a host of artists, writers, and other members of New York’s intelligentsia. Marcel Duchamp was a friend, and she was a frequent theater-goer, even designing the sets and costumes for the 1934 production of Gertrude Stein’s opera intended for an all-black cast, Four Saints in Three Acts. Oh, and she wrote poetry, which is a constant presence throughout this exhibition at the Jewish Museum. Reading her poetry, like looking at some of her works, can sometimes feel like an exhausting account of the pleasures of being one of the “haves”: “My attitude is one of Love / is all adoration / for all the fringes / all the color / all tinsel creation / I like slippers gold / I like oysters cold / and my garden of mixed flowers / and the sky full of towers / and traffic in the streets / and Maillard’s sweets / and Bendel’s clothes / and Nat Lewis hose / and Tappé’s window arrays / and crystal fixtures / and my pictures / and Walt Disney cartoons / and colored balloons.” Still, there’s a soulful seeing behind her spindly figures, especially her self-portraits and portraits of her closest family members. Taken together these paintings are a masterclass in forging an artistic path of one’s own.

Star Montana’s photographs line the walls of the Main Museum’s Beta space—each a portrait of someone who the artist encountered on the streets or met through an open call. Some are friends. Most are strangers. Yet all are given a kind of monumental attention in Montana’s practice. Alongside each photograph is a small piece of writing, reflecting on the circumstances in which the picture was taken, the first time Montana met her subject, or a meditation on the vagaries of dailyness living in East and South Los Angeles. The viewer scans between words and picture, looking for the same vulnerabilities and strengths in the images that appear in the text. The colors of these photographs are lush, and the relationship between sitter and photographer is palpable, close. It is an ode to this great and complex city, as evinced through the people who live in it.

Now on view at the Wexner Center for the Arts, Gray Matters brings together thirty-seven contemporary women artists exploring the practice of grisaille—the French term for working in shades of gray. “Ranging from emerging to well-established, these artists challenge an all-too-simplistic notion of colorless ‘neutrality’ as they reveal the variegated spectrum of black, white, gray, and everything in between.”

The more than fifty works include a variety of mediums and media, from sculpture to portraiture, video to graphite drawings. Among the works is Mickalene Thomas’s Hair Portrait #20 (2014). Known for her colorful canvasses, Thomas tones down her palette in Hair Portrait #20 “without relinquishing her celebratory use of rhinestones.” Also on view in the exhibition is Bethany Collin’s A Pattern or Practice (2015). In this piece the viewer is confronted with a wall installation of ninety-one blind-embossed portions of the US Department of Justice report on the Ferguson police department. “The show goes incredibly quiet with an idea that is incredibly loud,” Michael Goodson, senior curator of exhibitions, described arriving at the neatly spaced white sheets, with the words of the report pushing up the fibers of the paper.

A video of the exhibit, behind the scenes with artists’ interviews, can be found on YouTube here: https://www.youtube.com/watch?v=KIcdKkJV3Mg.

Alumni of the Native Arts Artists-in-Residence program at the Denver Art Museum return for a summer of collaboration and creation. Melanie Yazzie, Gregg Deal, and Walt Pourier are cocreating through a project titled Action X Community X Togehterness X.

The Native Arts Artists-in-Residence program kicked off in 2012 with Yazzie and has gone on to host many established and up-and-coming artists working across media. Yazzie, a sculptor, painter, printmaker, and installation artist, often collaborates with indigenous artists, including those from groups in New Zealand, Siberia, Australia, and Canada, among others. Her work is informed and shaped by personal experiences and tries to tell many stories about things both real and imagined. It follows the Diné dictum “walk in beauty” literally, creating beauty and harmony.

“My artwork is culturally based in my heritage of being a Diné (Navajo) person. The artworks stem from the thought and belief that what we create must have beauty and harmony from within ourselves, from above, below, in front, behind and from our core. We are taught to seek out beauty and create it with our thoughts and prayers. I feel that when I am making my art, be it a print, a painting or a sculpture, I begin by centering myself and thinking it all out in a ‘good way,’ which is how I was taught from an early age. My work speaks about travel and transformation.”

In the joint projects Yazzi, Deal, and Pourier will host talks, tours, and workshops at two Untitled Final Fridays, on July 28, and August 25. They will hold a hands-on artmaking workshop at the Friendship Powow and American Indian Cultural Celebration on September 9 also.