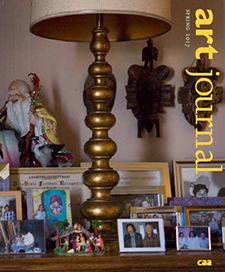 “What to do with all the stuff?” This is one of many questions posed—and provisionally answered—in the most recent issue of Art Journal, in an extensive multiauthor forum that delves into the complex matter of artists’ estates. “The Politics of Legacy,” guest-edited for the journal by Rachel Middleman and Anne Monahan, comprises contributions by no fewer than twenty-one artists and scholars. The texts include interviews (with, for example, Flavin and Rainer Judd, Mira Friedlaender, and Jane Kallir of Grandma Moses Properties, Inc.) and position papers (by Caroline A. Jones, Michael Corris, and Nancy J. Troy, among others). Central to the forum are three commissioned artists’ projects by Danh Vo (on the estate of Martin Wong), Mimi Gross (the estate of her father Chaim Gross, as well as her own legacy as an artist), and Jill Magid (the contested estate of the Mexican architect Luis Barragán).

Elsewhere in the issue, editor-in-chief Rebecca Brown has selected three essays that deal with upheaval. Nazar Kozak details the interventions by Ukrainian artists during the 2013–14 uprising in Kyiv that brought down the nation’s government—artworks that at times literally became part of the armed barricade in the city’s central square. Sherry Buckberrough conjures the early twentieth-century context in which the Robert Delaunay created singular works with themes of androgyny, gender, and political violence. Sophie Landres explores sexual, corporeal, and musical interventions of the groundbreaking performances of Charlotte Moorman in late-1960s, as the new ideas of feminism reached the larger culture.

The issue marks the debut of reviews editor Kirsten Swenson, whose commissions explore books on Carolee Schneemann, on art in postwar South America, and on the trajectory of the choreographer Simone Forti. “The Prehistory of Exhibition History,” a critical bibliography by grupa o.k. (Julian Myers and Joanna Szupinska), completes the section.