We are pleased to welcome Elizabeth Hill Boone, Professor of History of Art and Martha and Donald Robertson Chair in Latin American Art at Tulane University, as the 2019 CAA Distinguished Scholar.

An expert in the Precolumbian and early colonial art of Latin America with an emphasis on Mexico, Professor Boone is the former Director of Pre-Columbian Studies at Dumbarton Oaks and recipient of numerous honors and fellowships, including the Order of the Aztec Eagle, awarded by the Mexican government in 1990.

CAA media and content manager Joelle Te Paske corresponded with her recently to learn her thoughts on art history, scholarship, and challenges in the field. Read their interview below. 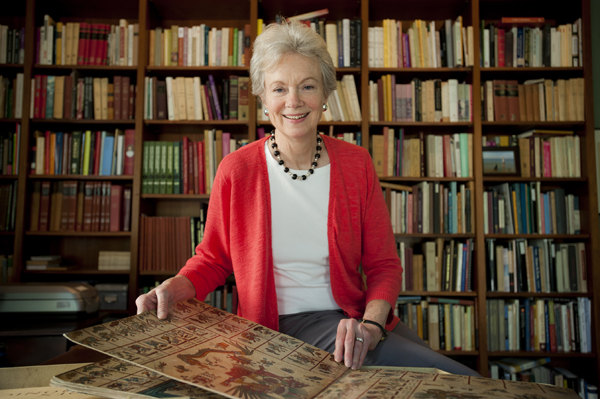 Joelle Te Paske: Thanks for taking the time to speak with CAA. So, where are you from originally?

Elizabeth Hill Boone: Coming from a military family rooted in Virginia, I moved from coast to coast often as a child and then attended the College of William and Mary in Virginia for my BA.

JTP: What pathways led you to the work you do now?

EHB: It was at William and Mary, where I was a Fine Arts major. The sculpture professor Carl Roseberg offered a course, Ancient Art, that included a three-week section on the Pre-Columbian Americas. He showed us and presented the then-canonical explanation of the monumental “Coatlicue” sculpture from Aztec Mexico, and I was immensely intrigued. I wondered what kind of mind would conceptualize and carve a work like that as its creator or mother goddess. That question led me into Aztec studies, which took me to the University of Texas at Austin for my PhD, and to Aztec painted books, where similar images were to be found. I became a manuscript specialist because I needed to understand what the manuscript paintings meant, how they related to the Coatlicue, why they came to fill those particular pages. Since the field of Mexican manuscript painting was in its infancy, I left the Coatlicue behind to focus on the other manuscript genres and Mexican pictography as a system. My study of Mexican pictography naturally led me to the issue of how the concept of Writing should be broadened.

JTP: What are you working on currently?

EHB: I am now finishing up a book analyzing the corpus of pictorial manuscripts created in the early colonial period to document the ideologies and practices of Aztec culture. United by their decendency from Mexican pictography, these painted reflections of the Aztec past were re-purposed to inform Europeans principally about Aztec religion, as weapons of conversion and aids for colonial administrators.

JTP: What is your favorite part of the work you do?

EHB: I think most art historians love solving mysteries: discovering connections and uncovering histories and contexts. I want to understand what an object meant to its different audiences at the time of its creation, and also what it can tell us now about our own perspectives. Depending on the object, it can also be rewarding and telling to track its reception and reconceptualization through time. 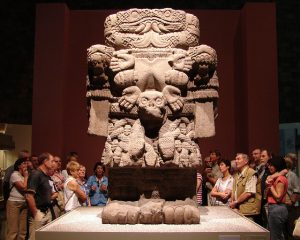 JTP: If you could boil your teaching philosophy down to a central idea, what would it be?

EHB: My goal is to excite students about the potentials of visual expression. This means giving them knowledge of the material such that they can understand its cultural context and power, but also showing the students how the objects speak today as works of art.

JTP: What’s exciting to you right now in the field?

EHB: Globalism. The discipline has broken the confines that once centered it in Western Europe and is now focusing on connections between peoples. Centers of discourse are now shifting toward the larger Atlantic world, the Pacific world, the Silk Road, and the trans-Mediterranean/African network, to name just a few. It is opening up new ways of understanding the meaning and agency of art.

JTP: What do you see as the greatest challenges in the field right now?

EHB: I see two challenges. The first and most important is relevance. Art history must articulate why it matters in these times. As graphic communication (communication that is not oral or gestural) becomes even more the principal form of communication between people, the discipline needs to assert its place as a source of theoretical knowledge and of models for investigative practice.

The second challenge is linked to the increasing study of trans-cultural connections. Scholars who seek to follow the movement of objects and ideas across spaces and between cultures need to develop strong local knowledge of all participants, so that these global connections are grounded in area expertise. In order to avoid facile comparisons and connections, researchers now have to master multiple areas.

JTP: Have you attended CAA conferences? Do you have a favorite memory?

EHB: I have attended many. Perhaps my favorite memories are of cross-cultural sessions that focus on issues relevant to many cultures, for example, civic identity, and in which the presenters push their material to address the large question in a serious way.

JTP: Thank you, Professor Boone. We’re looking forward to seeing you at the 2019 conference.

Elizabeth Hill Boone is Professor of History of Art and Martha and Donald Robertson Chair in Latin American Art at Tulane University. An expert in the Precolumbian and early colonial art of Latin America with an emphasis on Mexico, she is the former Director of Pre-Columbian Studies at Dumbarton Oaks. Professor Boone has earned numerous honors and fellowships, including the Order of the Aztec Eagle, awarded by the Mexican government in 1990. She is a Fellow of the American Academy of Arts and Sciences and a Corresponding Member of the Academia Mexicana de la Historia. Her research interests range from the history of collecting to systems of writing and notation, and are grounded geographically in Aztec Mexico, but extend temporally for at least a century after the Spanish invasion. She is the author of Cycles of Time and Meaning in the Mexican Books of Fate (Texas, 2007) and Stories in Red and Black: Pictorial Histories of the Aztecs and Mixtecs (Texas, 2000), which was awarded the Arvey Prize by the Association for Latin American Art.