The following article was written in response to a call for submissions by CAA’s International Committee. It is by Inesa Brasiske, a Lithuanian art historian, lecturer, and recent graduate from the program in Modern and Contemporary Art: Critical and Curatorial Studies (MODA) at Columbia University, New York. 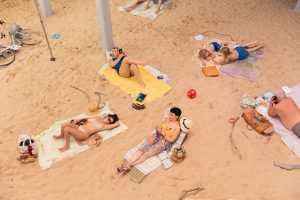 Upon entering the former shipyard in the secluded Marina Militare complex located a few steps from the Arsenale, one finds a beach. More than a dozen sunbathers lie drowsily on pastel colored towels among their absentmindedly-scattered stuff, preoccupied with the usual holiday business (Fig. 1). One by one they sing out their monologues, occasionally growing into undulating choruses. The performers chant their personal dramas, complaints, and joys alongside sunscreen instructions and deadpan morning routines as viewers peruse the scene from above (Fig. 2). 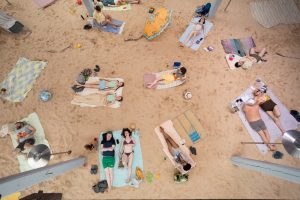 An opera-performance for thirteen voices, Sun & Sea (Marina) was selected to represent Lithuania at this year’s Venice Biennale, winning the country its first Golden Lion for best national pavilion. Noted by the jury for its experimental spirit and site-specificity, the work was created by three Lithuanian artists: filmmaker and director Rugilė Barzdžiukaitė, writer Vaiva Grainytė, and composer and artist Lina Lapelytė. It is the second time the all-female trio united their forces in this genre. Their debut work, the opera Have a Good Day! (2013), focused on the inner lives and work routines of cashiers in a shopping center. With this follow-up, the artists continued to tap into the subject of reckless consumerism, accompanied by the same physical and emotional exhaustion that framed their first work, this time taking their exploration in an eco-critical direction.

The libretto is a set of individual, discrete stories stitched together by Grainytė who, with a poet’s economy, delivers a memorable spectrum of characters, including a wealthy mother recounting her son’s travel adventures, a workaholic engaged in self-analysis, and twins envisioning a 3D-printed biosphere. The text is charged with humor and absurdist juxtapositions in a surrealist vein; viewers witness an uneasy morphological sisterhood of floating jellyfish with plastic bottle caps, disturbing scenarios of picking chanterelles in the midst of winter, or drinking piña coladas at a barrier reef. These evocative narratives unfold through a minimalist score for synthesizer and voice composed by Lapelytė and sung by a group of performers with divergent musical backgrounds. Catchy melodies with repeating pulsing patterns running through high pitched arias and dreamy lullabies are responsible to a large extent for luring viewers into this ambiguous zone of relaxation and oblivion in the face of looming ecological disaster.

One of the most striking aspects of Sun & Sea (Marina) is the atypical positioning of the viewers vis-à-vis the scene, as they experience the opera-performance while looking down from the mezzanine which frames the sandy seaside into a horizontal tableau peppered with human and, occasionally, other-than-human bodies (Fig. 3). The director and scenographer, Barzdžiukaitė, brings a filmmaker’s eye to the work; the most recent of her own films is itself calibrated on an aerial perspective of a cormorant colony at the Lithuanian seaside. In the opera, the specific viewpoint works as a conceptual device aptly playing into the ecological theme of the piece. The non-human perspective that the audience embraces points to the limits of the anthropocentric view and suggests something alarming and at the same time slightly comical about the human species in all its flatness. 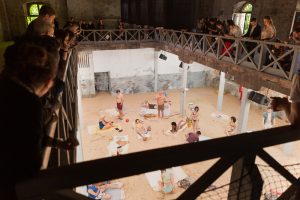 The opera was first shown in Lithuania in 2017. Arranged in the atrium of the National Gallery of Art in Vilnius, the Lithuanian version was a slightly longer piece, repeated as a series of performances throughout one day. After its premiere, the work traveled to Germany, where it was shown in a former movie theater as part of the Staatsschauspiel Dresden theater’s repertoire. It is in Venice, however, that the work has been given its most complex treatment, fully exposing its eco-critical and social potential. The opera turned into an endurance performance-cum-installation, running continuously for eight hours at a time, with no beginning or end, once (and more recently twice) a week, while for the rest of the time it is presented as a (post-apocalyptic?) sound installation devoid of any living bodies or voices.  The authors did not limit their open-ended approach to experimenting with new formats alone; they also responded to local resources and communities. Under the curatorship of Lucia Pietroiusti, Curator of General Ecology and Live Programs at the Serpentine Galleries in London, the artists invited Venetian residents to perform the piece during the long run of the Biennale, commissioned the last existing printing house in the city to print the exhibition catalogue, and, together with Benjamin Reichen from the Åbäke design collective, collaborated with inmates of a local prison in a silkscreen workshop to produce the cover of the opera’s LP. 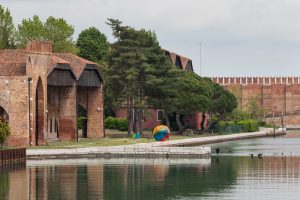 Where much of ecologically oriented art tends to amplify our sensations in order to enable us to hear more sharply and see more clearly the scale of the climate crisis and ecological collapse, Sun & Sea (Marina) operates on a rather different register. A condensed image of the status quo of the contemporary world and its dystopian future is communicated through the recognizable, the quotidian, the banal. The durational aspect of the work, which puts seemingly surplus non-scripted real-life experiences on view—performers eating their lunch, chatting, getting exhausted and resting, kids running free and playing around, dogs barking—strengthen this realistic effect as does the participatory element inviting viewers to spend some time on the beach among the singing performers.

In the end, there might be no sea in the shipyard, but the beach there is real, and it mirrors our own day-to-day needs and deeds enmeshed in the forces of late capitalism punctuated by the logic of efficiency and endless consumption of goods as well as experiences. The end of the world here is void of spectacular images and sounds, but rather presents itself as what environmental writer Rob Nixon terms a “slow violence,” wherein ecological catastrophe does not occur in a sudden blaze but in a gradual relentless deterioration. Representation of the latter, Sun & Sea (Marina) seems to propose, curiously lies between accurate account and eloquent visionariness.