We are delighted to welcome Arnold J. Kemp, in conversation with Huey Copeland, as one of our Distinguished Artist Interviews at the 2020 CAA Annual Conference. Learn more.

Up next in our Member Spotlight series, we are highlighting the work of Arnold J. Kemp, professor of Painting and Drawing and Dean of Graduate Studies at the School of the Art Institute of Chicago (SAIC). Joelle Te Paske, CAA’s media and content manager, corresponded recently with Professor Kemp to learn more about his work. Read the interview below: 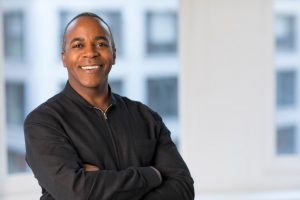 Where are you from originally?

I am from the 6 square miles of a Boston neighborhood called Dorchester. The back of my high school, which was located in the Fenway, faced the Isabella Stewart Gardener Museum and was just a few blocks away from the Museum of Fine Arts. I took classes at the MFA through an after school program supported by the Boston Public School system, and I was lucky to be asked to take classes at the School of the Museum of Fine Arts, Boston during the summers of my sophomore and junior years of high school.

During my senior year in high school I went to New York City to visit my older sister, and while she was at work I spent the day at the Metropolitan Museum of Art. I was entranced with the African and Oceanic collections there and I learned all that could. This was a transformative experience that has much to do with the way I have surrounded myself in an immersive life in the arts, culture, and literature.

What pathways led you to the work you do now?

After graduating high school I took part an internship working for the Smithsonian’s National Air and Space Museum. I learned a lot there about how museums functioned. Then, in college at Tufts University, I worked for the Boston Center for the Arts while my roommates and I ran a small organization that showed our peers—other young artists and writers—and invited guests such as Tim Rollins, Emett Gowin, and Marie Howe. I was aware that not far away, the Dark Room Collective—which included Ellen Gallagher, Kevin Young, Tisa Bryant, Thomas Sayers Ellis, and Sharan Strange—was doing similar things. In fact, Ellen Gallagher and I worked together on the night shift at the Museum School’s library.

In 1991, when the art world was still struggling to distill the pain and loss of the AIDS epidemic, I moved to San Francisco and marched with ACT UP. Around that time I also started working at the not-for-profit experimental space called New Langton Arts, and I participated in the later days of conferences organized by the National Association of Artist’s Organizations (NAAO).

At Langton I met role models such as Renny Pritikin, Judy Moran, Jon Winet, Holly Block, Ann Philbin, and James Elaine who believed in spaces started by artists to support artists. I also met many great artists and writers who were central to the literary movement called New Narrative and places such as Small Press Traffic, The Lab and The Luggage Store gallery. Kevin Killian, Dodie Bellamy, Kathy Acker, Bob Glück, Barret Watten, Leslie Scalpino, Quincy Troupe, Harryette Mullen had a big influence on me. These people are important to me because they encouraged me to be an artist, a poet, and a curator. They showed me how to curate and showed me values of good organizations that supported communities struggling for relevance.

At that time I had no idea that I would end up teaching. I was supporting myself by working for arts non-profits. I kept doing more and more in this arena and eventually became an assistant curator and then associate curator at Yerba Buena Center for the Arts (YBCA). I worked there for ten years and curated solo and group exhibitions and worked with artists such as David Hammons, Patty Chang, Carrie Mae Weems, Fred Wilson, Ellen Gallagher, Laylah Ali, Bruce Conner, John Baldessari, Michael Joo, and so many others. I even met Bill T. Jones, Meredith Monk, Philip Glass, and Conlon Nancarrow while working at YBCA. I worked there from its start in 1993 until 2003 when I left to attend graduate school at Stanford.

Teaching came somewhat naturally while I was pursuing an MFA at Stanford. After grad school and after struggling for a few years as a New York artist, an opportunity arose for me to direct the MFA in Visual Studies Department and to teach at the Pacific Northwest College of Art in Portland, Oregon. Prior to teaching in Portland I had an exhibition there and curated and organized a public program around my exhibition as part of Portland Institute for Contemporary Art’s TBA Festival. So much seemed possible in Portland, and I developed a true art family there.

The desire to experience working with larger schools and more diverse populations led me to positions as Chair of the Department of Painting and Printmaking at Virginia Commonwealth University (VCU) and also to my current position as Dean of Graduate Studies at the School of the Art Institute of Chicago (SAIC).

What are you working on currently? 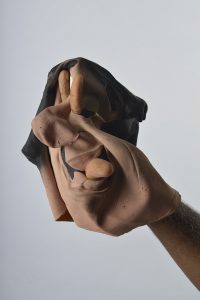 I am always busy in the studio. I just completed delivering 23 works to the set of a remake of a Hollywood film that is currently being shot in Chicago. It turns out the producer of Jordan Peele’s films has been looking at my work for a long time, and I am glad that this opportunity has come my way.

I am also preparing for a solo show opening at the Los Angeles-based nonprofit JOAN in September 2020, followed by a solo show at Fourteen30 Contemporary, my gallery in Portland. For both these shows I will exhibit paintings and sculptures. Perhaps there will be a performance of one of my plays that have been staged in art galleries and artists’ spaces such as Biquini Wax EPS in Mexico City.

I also just joined the board of Threewalls, a Chicago-based nonprofit with an itinerant exhibition program that supports and encourages art practices that respond to lived experience, encouraging connections beyond art. As part of Threewalls’ board I will be involved again in expanding the discourse around the presentation and  exhibition of contemporary art—from Threewalls, to the fourth wall, to breaking down walls. This is where itinerancy comes into play as the presentation model for Threewalls.

Having lived and practiced as an artist, writer, curator and educator in Boston, San Francisco, New York, Portland, Chicago and Richmond, I have had a life that is productively itinerant!

How would you say poetry weaves itself through your work?

For many years theses were separate activities, but in 2012 I began writing theatrical works with spoken lines that are meant to be performed in galleries by non-actors chosen from the community in which the piece is performed. Often the pieces concern that community so I might sometimes have a local artist or curator play themselves. This happened most recently at the venue in Mexico I mentioned, Biquini Wax EPS, in a farce that I wrote based on my experiences in the art and academic worlds. The piece was translated into Spanish and performed by local artists, writers, curators, and activists. I think of the pieces as time based-sculpture. The performance was just one part of a big show titled “When the Sick Rule the World” after Dodie Bellamy’s essay of the same name.

What is a favorite exhibition you’ve worked on over the years?

When I was at Pacific Northwest College of Art I curated a two-person show of B. Wurtz and Xylor Jane. There was a catalog and public program, and it was great to bring my San Francisco, New York, and Portland communities together. Xylor Jane is painter I have known from way back in my San Francisco days. Her work is formally beautiful and inspired by numbers, the Fibonacci sequence and the color sequences of ROYGBIV. She accomplishes a lot in visually intense abstractions that are based on logical forms. B. Wurtz is older than Xylor and is more of a conceptualist, having gone to school at CalArts in its heyday. Some of his classmates were Mike Kelly and Tony Oursler. He took classes with [Michael] Asher. The show was rigorous and unexpected—it did a lot to get students to think out of the box.

Do you have a favorite artist or exhibition in general?

I am not sure, at this point, if I have favorite artists anymore, but I recall The Museum as Muse which was curated by Kynaston McShine for MoMA as being a terrifically aesthetic, intellectual, and poetic exhibition that sought to give voice to the complicated relationship between museums and artists in light of history and institutional critique. I am fortunate enough to have seen it and to also have the terrific catalog. I feel that McShine as an art world personage needs to be studied and written about. He was important not just for being the curator of Primary Structures and Information but also for being of black Caribbean descent (he was born in Trinidad) and for being a one-time the lover of Frank O’Hara. Paradoxically, his work at MoMA also caused the Guerrilla Girls to organize and fight for greater inclusion of women and people of color in New York museums. No one has dealt with McShine’s legacy or his biography in the way they should. McShine was complicated and private, and so brilliant and influential.

When did you first become a CAA member?

I joined CAA in 2013 because as a department chair at VCU’s School of the Arts I wanted to stay in touch with artists, historians, and theorists from around the country. There are certain people who I aim to see at every conference just so that we can catch up and talk about the field and find ways to organize and help each other. In some ways the CAA reminds me of NAAO conferences that I used to attend in the 1990s. 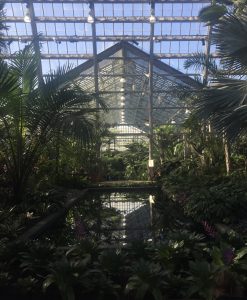 What should people make sure not to miss while they’re in Chicago for the 2020 conference?

In Chicago there is no such thing as bad weather, only bad clothing, so I suggest bringing a warm coat! Also, go to Garfield Park Conservatory—one of the largest and most stunning botanical conservatories in the nation with thousands of plant species from around the world throughout eight indoor display gardens.

What is your must-read book at the moment?

I would have to say Housing Shaped by Labour: The Architecture of Scarcity in Informal Settlements by Ana Rosa Chagas Cavalcanti.

How do you balance your artistic and professional roles?

Surround yourself with the things and people that you love. That is the only way I have been able to find balance. I find balance because it is a necessity and loving what I do makes it worth the time and effort.

Arnold J. Kemp is an interdisciplinary artist living in Chicago. The recurrent theme in his drawings, photographs, sculptures and writing is the permeability of the border between self and the materials of one’s reality. Kemp’s works are in the collections of the Metropolitan Museum of Art, The Studio Museum in Harlem, The Berkeley Art Museum and Pacific Film Archive, The Portland Art Museum, The Schneider Museum of Art, and the Tacoma Art Museum. He has received awards from the John Simon Guggenheim Memorial Foundation, the  Joan Mitchell Foundation, The Pollock-Krasner Foundation, and Portland Institute for Contemporary Art. His work has been exhibited recently in Chicago, Mexico City, New York, San Francisco and Portland. His work was also shown in Tag: Proposals On Queer Play and the Ways Forward at the ICA Philadelphia. Kemp was a founding curator at Yerba Buena Center for the Arts from 1993-2003 and is currently the Dean of Graduate Studies at the School of the Art Institute of Chicago.