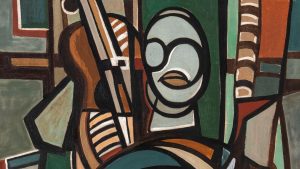 This important exhibition examines the formative investigations of Lygia Clark (b. 1920, Belo Horizonte–d. 1988, Rio de Janeiro), the pioneering Brazilian artist and founding member of the avant-garde Grupo Frente in Rio de Janeiro, and places significant chronological emphasis on her primary transition from figuration to abstraction and major series of geometric and concrete abstractions between 1948-1958.  The exhibition traces the artist’s evolution in three organized sections: “The Early Years, 1948-1952”; “Geometric Abstraction, 1953-56”; and “Variation of Form: Modulating Space, 1957-58”.  In 1956, Clark delivered a keynote lecture and spoke of painting as an “experimental field.”  In her early experiments, she liberated the painting’s frame and explored space as an “organic and spatial line.”  Clark envisioned spatial divisions as elastic and indeterminate and reinvigorated the pure grid of Neo-Plasticism through bodily and “vital” surfaces, a process of restructuring the plane of the canvas as a locus of exchange with the viewer.  While much scholarly attention has been granted to her later therapeutic practices, Painting as an Experimental Field traces her formal painterly principles and early constructivist influences, ideas that will develop and mature in her profound contribution to Brazilian Neo-Concretism.

The exhibition features the work of two exiled Venezuelan artists, Deborah Castillo and Érika Ordosgoitti, who respond to the increasingly repressive government of Venezuela and question the rising nationalism, economic inequality, and worsening social problems. It is part of the Mary H. Dana Women Artists Series and hosted by the Mabel Smith Douglass Library, the oldest continuous running exhibition space in the United States showcasing the work of emerging and established contemporary women artists. Castillo’s and Ordosgoitti’s artistic practice could be described as performance of protest. The female body featured in their work is imbued with agency and is able to effect social change. Their performative acts of disobedience and feminist social protests activate the body to challenge Venezuelan political regime and the country’s heteronormative patriarchal culture and canonical aesthetics.