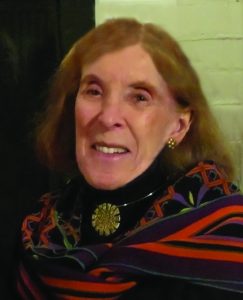 We were saddened to learn of the passing of critic, publisher, and longtime CAA member Cynthia Navaretta last month at the age of 97. An active member of the organization and a founding member of the Women’s Caucus for Art (WCA), Navaretta was founder of the feminist arts publisher Midmarch Arts Press and a tireless advocate for women artists.

A memorial in her honor will be hosted via on Sunday, September 13th, 2020, at 6pm (EST). Members interested in attending are invited to contact cyncelebration@gmail.com to receive information and a link closer to the event. Readers are also invited to post comments and pictures about her life on a newly created Facebook page, here.

In 1974, she was a founding steering committee member of ‘Artists Talk On Art’, the art world’s longest running panel discussion series. With her knowledge of the New York art scene, along with her professional qualifications in engineering and building, Cynthia served as a mayoral appointee to the Artists Certification Committee of the NYC Department of Cultural Affairs and later served as the public voting member of the powerful Loft Board in Manhattan for 20 years, deciding who was a bona fide artist and deserving of live-work studio space in converted factories. She was a founding member of the Women’s Caucus for Art, the Coalition of Women’s Arts Organizations, and also Women in the Arts.

She represented the United States at the 1985 UN Conference on Women in Kenya and served in similar capacities on other boards and meetings around the world including the International Festival of Women Artists, Copenhagen in 1980. She befriended many well-known African-American women artists throughout the United States. In 1995, she published the first definitive compendium of American women artists of color  – Gumbo Ya Ya: Anthology of Contemporary African – American Women Artists with an introduction by Leslie King Hammond, Midmarch Arts Press.

As the founder of Midmarch Arts Press, she published numerous memoirs, guides, histories and anthologies by and about American artists, male and female including: Guide to Women’s Arts Organizations, Women Artists of the World edited by Sylvia Moore, Cindy Lyle and Cynthia Navaretta, Mutiny in the Mainstream — Talk That Changed Art (with Judy Seigal), The Heart of the Question, The Writings and Paintings of Howardena Pindell, introduction by Lowery S. Sims, Voices of Women, by Lucy Lippard, Postmodern Heretics, by Eleanor Heartney, Out of the Picture: Milton Resnick and the New York School edited and with an Introduction by Goeffey Dorfman and The First Wife’s Tale: A Memoir by Louise Strauss – Ernst, to name only a few.

Her sharp mind, mixed with her organizational skills and ability to span many spheres of knowledge and personalities made her the ideal art panel planner, moderator or guest speaker. She was a beloved panel participant at College Art Association and mentored many young female artists. She was an active member of the International Art Critics Association and often traveled on their numerous trips around the world. She was also the publisher, along with photographer Judy Siegel, of the well-known Women Artist News (1978 – 1991), the first publication sent out on a regular basis covering the doings and activities of women artists; thus, publishing the first constant and continuing dialogue for women artists in the United States.  A prodigious publisher, author and critic of feminist art in the United States Cynthia was one of the few who acknowledged and attracted regional and southern feminist artists whose work would otherwise most probably never have seen the light of day. Through the vehicles of Women Artist News and Midmarch Press, Cynthia was determined to document and champion many obscure female artists, offering them an exclusive avenue to introduce themselves and their work to a wider audience in the art world.

In her later years, she organized and curated her archives which were accepted by the Smithsonian Institution’s Archives of American Art. This written legacy from one of the leading feminist voices on art- is sure to be preserved, shared, and seen as a unique transcript of the American art experience.

In her ‘other’ life, Cynthia earned a master’s degree in mechanical engineering the 1940s. Returning to NYC, she was hired by the construction company Alvord & Swift. Established in 1911, Alvord became a significant contractor in the emerging specialty of HVAC design and construction. She designed and built many of the HVAC systems with Alvord & Swift for well-known skyscrapers in New York, including the famous Solow building. She also designed many of the HVAC systems at the 1964 World’s Fair in New York. During her several year’s tenure there, she had the thankless job of training and preparing no fewer than three less talented male colleagues to assume the position and prestige of Vice President. This glass ceiling was the deciding factor in her eventual resignation. At that time, she was one of approximately 400 female mechanical engineers in the United States.

Throughout her engineering career, she held a variety of ambitious, supervisory positions. These included a managerial position for the ABC Television Network when the new Lincoln Center broadcast facility was being built. She also did a stint as an AMTRAK vice president, responsible for ‘new construction’ and ‘rights of way.’ She eventually retired to devote all her time to her publishing house and friends and family. But well into her nineties she could still be seen at art openings dressed to the ninths with her walker having arrived fashionably late by bus.