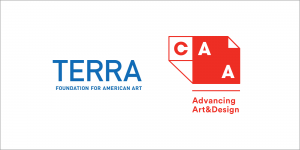 Last year we announced our administration of the Terra Foundation for American Art Research Travel Grants, providing support to doctoral, postdoctoral, and senior scholars from both the US and outside the US for research topics dedicated to the art and visual culture of the United States prior to 1980.

Colin Young, Yale University, “Desert Places: The Visual Culture of the Prairies and Pampas across the Nineteenth Century”

Catherine Damman, Wesleyan University, “The Work of Art in the Age of Half-Hearted Reproducibility: Performance and Affective Labor in the 1970s”

Julia Berghoff, Eberhard Karls University Tübingen, Germany, “US-American Landscape Painting in the 19th Century and the Interaction of Art and Science or the Question of Environmental Awareness”

Chloe Julius, University College of London, United Kingdom, “On the Re-emergence of an Old Category: Precursors for 1990s ‘Jewish Art’ in Postwar American Art and Criticism”

Stephanie Schwartz, University College of London, United Kingdom, “The Native and the National: Documentary and Fascism in the Era of the New Deal”