International News: The Van Abbemuseum in the Netherlands Explores the Legacies of Colonialism in a Solo Exhibition by Victor Sonna

The following article was written in response to a call for submissions by CAA’s International Committee. It is by Ilaria Jessie Obata, an art historian and curator currently completing an MA in Curating Art and Cultures at the University of Amsterdam.

Victor Sonna’s first solo exhibition, 1525, which opened at the Van Abbemuseum in Eindhoven in July 2020, tells a multilayered story of personal introspection and shared colonial legacies. This collaboration between the artist and the museum is among the most recent exhibitions that fall under the mission scope of Musea Bekennen Kleur (Museums Confess Color), a contemporary platform established in Amsterdam in March 2020, in which “museums take accountability and responsibility through ongoing conversations about achieving diverse and inclusive institutional settings” (Musea Bekennen Kleur, https://museabekennenkleur.nl/).

The Van Abbemuseum, a participant in this project, is also one of the first museums in the Netherlands to embark upon a steady process of decolonizing its exhibitions and collections. This institutional decision was further marked by the Van Abbemuseum’s 2007 exhibition, Be(com)ing Dutch, in which participating artists Anette Kraus and Petra Bauer criticized racialized images of Zwarte Piet (Black Pete), which perpetuate the use of black face for the Sinterklass holiday (Saint Nicholas). The museum encountered severe backlash from the far-right party in the Netherlands for its criticism of the Dutch holiday, which further exposed this contested discussion within the country as whole. This response exemplified the need to continue the process of decolonizing cultural and educational platforms that perpetuate racial stereotyping. Therefore, Sonna’s solo exhibition builds upon the museum’s desire for institutional accountability regarding the Netherland’s recent past and its involvement with the trans-Atlantic slave trade. Sonna and the Van Abbemuseum decided to organize an exhibition with a dynamic narrative that would prompt discussion about contemporary colonial legacies. Working together, Sonna, Van Abbe director Charles Esche, curator Steven ten Thije, and guest curator Hannah Vollam, designed and curated an exhibition that presented Sonna’s research from multiple perspectives. 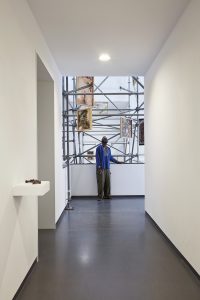 Figure 1. Victor Sonna in his 1525 exhibition at the Van Abbemuseum, 2020. Photo: Ronald Smits

Born in 1977, Victor Sonna is a visual artist who moved to the Netherlands at age nineteen from Yaoundé, Cameroon. Having studied at the Design Academy in Eindhoven and then at the AKV | St. Joost in Den Bosch, Sonna is based in Eindhoven and works in various mediums. His Van Abbemuseum exhibition includes three installations of tapestries, prints, and audio-visual material. The exhibition narrative started with his purchase of a pair of chains that once belonged to an enslaved person in New Orleans. The number 152 was engraved on these chains and thus remains the focal point for the exhibition title, 1525 (Fig. 1). Sonna’s installations regularly refer to the commoditization of human life under slavery, or rather “…the treatment of persons as property or, in some kindred definitions, as objects… when the individual is stripped of his previous social identity and becomes a non-person, indeed an object and an actual or potential commodity” (Igor Kopytoff, “The Cultural Biography of Things: Commoditization as Process,” in The Social Life of Things: Commodities in Cultural Perspective, p. 65). Sonna’s purchase led to his own research on the socio-historical impact of colonial exploitation, which constructed and perpetuated the commodification of human life for Western imperial profit.

His audio-visual works, which contextualize and document the slave trade in Ghana, are shown in six separate film installations in the exhibition. Sonna visually captured the external and internal space of Fort Elmina, a former slave trading post that was seized and consolidated by the Dutch in 1637. He documents remembrances of the trans-Atlantic slave trade, which have remained imprinted upon the walls of the fort and linger within the smell of the dungeons. The fort “plays a central role within the exhibition since the title,1525, also corresponds to the year marking the departure of the first slave ships from the West African coast to the Caribbean islands”(Harmen van Dijk, TrouwNL, 18 July 2020, translated from Dutch by the author). Sonna used this historical research to better understand the dehumanizing effects of the trans-Atlantic slave trade that turned enslaved African individuals into commodities, and led to a specific form of merchandising the colonial: distinguishing people as objects and as lesser than human. 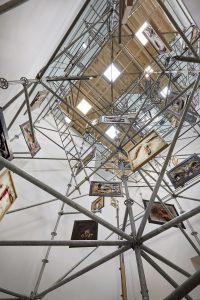 The accompanying installations showcase Sonna’s training as a visual artist as he meshes together the mediums of sculpture, metalwork and tapestry through the jaw-dropping 82-foot-high steam beam tower, from which his framed tapestries hang within the inner spire of the museum. This massive installation, titled the Tower of Babel (Fig. 2), contains the 152 tapestries that require multi-angled viewings because both sides of the frames are packed with layers of overlapping materials, from glued cane sugar to metallic nails and coins. Sonna gathered 152 European Gobelins tapestries, made between the eighteenth and twentieth century, which comprise his series Bleach and Dust, Sugar and Rubber and Maps. However, Sonna wanted to deconstruct the singular perception of these tapestries as representing “the history and prosperity of Europe” (Harmen van Dijk, TrouwNL, 18 July 2020, translated from Dutch by the author), by exposing the forms of exploitative slave labor used to extract materials such as sugar and rubber, which are imbedded and glued onto the surface of the tapestry. On Sonna’s website he states that this series approaches the “layering and displaying of connected histories that have been etched, trapped and layered in the earth” (Victor Sonna, http://victorsonna.com/site/news.php ).

Sonna presses different sculptural materials into the tapestries, creating multiple reliefs on their surfaces (Figs. 3,4,5). He “traps” metallic objects: coins, metal chains, and nails along with Kente cloth from Ghana that has been rolled up and sewn into the tapestries, and granulated cane sugar glued around the edges. He purposefully imbeds these materials into the textural DNA of the tapestry and locks each object inside it. The reliefs pushing out of the tapestry juxtapose the Gobelins framed surface with the visual effects of these contrasting materials, making us look again. The materiality of such commodities is weighed down by the history of their production, one fueled by the violence and death that characterizes the slave trade and its plantations. The artist’s desire to etch and trap together seemingly disparate materials creates a correlation between a shared European history of colonial exploitation and the creation of racial difference. 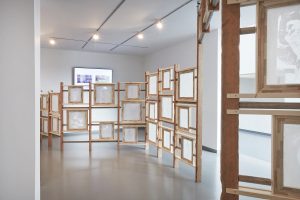 Lastly, a striking section of this exhibition required two visitors to stand in front of one another, separated by a series of fifty-two silkscreen frames titled the Wall of Reconciliation (Fig. 6). The term “reconciliation” connotes Sonna’s desire to ensure that the printed image reconciled two opposing views. Every silkscreen required a dark backdrop in order to see the printed image; it is only visible if two visitors are standing on opposites sides of the same screen. Thus, the two viewers on opposite sides see the same explicit images of violence that are part of a series of drawings depicting slavery in Suriname, a Dutch colony that gained independence only in 1975. In Figure 7, the image depicts a young boy holding a rake, signifying the effects of enforced labor during the formative years of a child’s life and how it can mold a perception of the self that is intrinsically tied to an object of labor. Henceforth, each of these installations emphasized Sonna’s desire to deconstruct a biased and unilateral frame of reference. 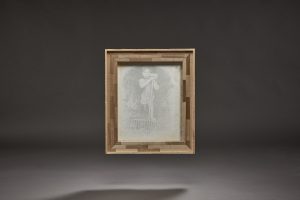 1525, which has received acclaimed reviews in the Dutch press, is on display at the Van Abbemuseum until May 2021. Writers have collectively applauded the museum’s commitment to showcasing this stirring and historically fueled narrative. The Van Abbemuseum will continue to produce related public programming that is both accessible and reflective of its mission to highlight the legacies of Western colonialism in a Northern European context.