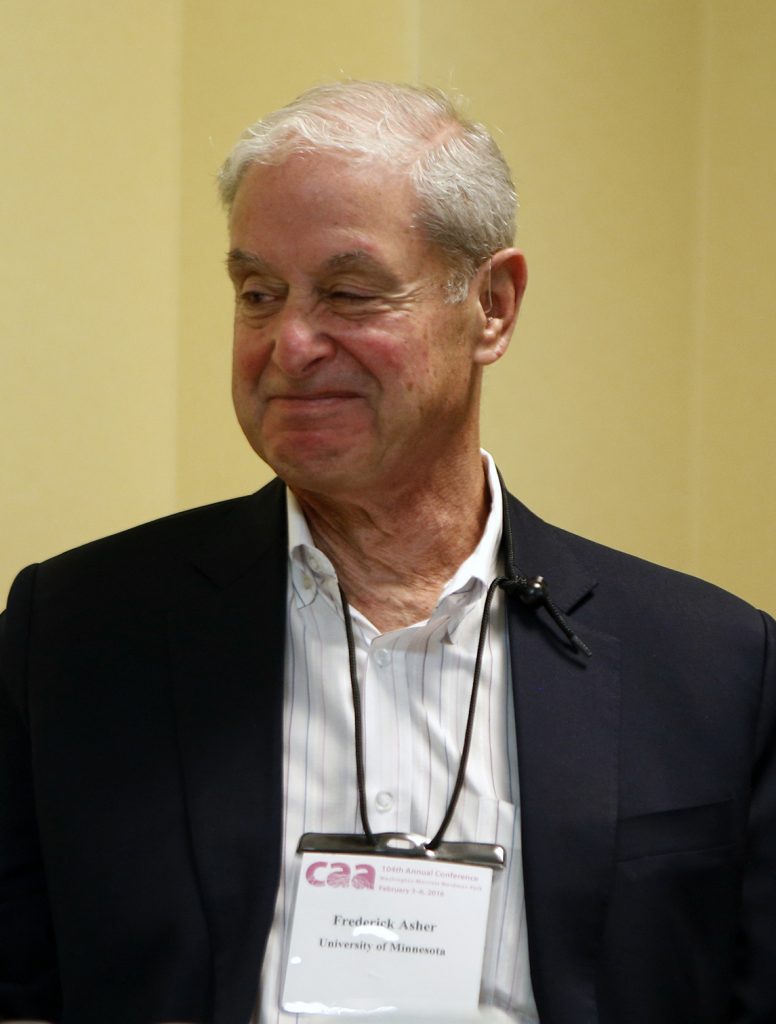 Frederick M. Asher, beacon of collegiality and builder of institutions, died on June 26, 2021, having turned 80 just one month earlier. His generosity of spirit guided many scholars through their graduate years and beyond: at the University of Minnesota, where he spent his academic career, and around the world. With Catherine B. Asher, his wife and fellow historian of South Asian art, he led initiatives to document and preserve images of art, archaeological, and architectural objects and sites in India; mentored numerous colleagues and students; and contributed his energies to making academic organizations flourish across the world. He was an early, active member of the American Council for Southern Asian Art (ACSAA); served as president of the American Institute of Indian Studies; and played many roles at CAA, most recently as part of the CAA-Getty International Program where his energies encouraged many of us to reach out across physical and intellectual distances to begin new conversations.

His early research, published in 1980 as The Art of Eastern India, 300–800 (Minnesota), draws connections across the Gupta and Pala eras, thinking deeply about continuities across media—terracotta, bronze, and stone—and across belief systems. His subsequent research led him to study contemporary sculptural practices as a way of understanding the work of unnamed historical sculptors and to a deep engagement with the materiality, crafting, and afterlives of both sculptural objects and the sites where they were worshipped and excavated. His final book, Sarnath: A Critical History of the Place Where Buddhism Began (Getty 2020), published just months before his death, focused on the place where the historical Buddha preached his first sermon, tracing the establishment, excavation, and reimagining of the monastic site from that founding moment to the present. In April, Rick discussed the book with James Cuno for a Getty podcast, giving us a glimpse into his intellectual process and offering many of us a reminder of the rhythms of his class lectures. With his students, Rick always ran toward questions and tantalizing bits of information, wondering at what we don’t know about the past and at the same time marveling at contemporary uses of ancient sculptures and sites. At Sarnath, this meant both the tourists shuttling in from Varanasi with their local guides (guides who almost certainly had met Rick and discussed their mutual love of the site with him) and the international monastic Buddhist communities with pilgrimage centers nearby. Rick cared deeply about his students, and his engaging, dynamic teaching was renowned. He received the University of Minnesota’s Morse-Alumni Undergraduate Teaching Award in 2005–2006, one of his most treasured moments of recognition.

I was incredibly fortunate to visit Sarnath for the first time with Rick and Cathy as part of a trip they organized for the cohort of graduate students in the late 1990s. The trip was exemplary of the Ashers’ generosity and openness—recognizing the hurdles associated with pursuing academic research in India, they sought to pass on their extensive experience by offering us the opportunity to shadow them in their respective projects. Rick had been working with a scientist at the University of Minnesota to ascertain the locations of quarries for various Pala-era (8th–12th century) sculptures by matching stone samples. The project focused on both the materiality and the process of crafting the sculptures—he considered how stone was separated from the earth, how it would have been chosen for a sculpture, and then how it was carefully carved with the detailed iconographies of a Vishnu or a Tara.1 The project’s success relied on his ability to bring people together in a common project: Rick recruited curators and conservators at museums around the world to undertake the delicate process of excising a thin section from the back of these sculptures to compare to the samples he gathered from quarries in Bihar and Bengal. It was this latter piece of the project that he embarked on that summer, taking two of us green graduate students with him into remote areas of Bihar, where we stayed in dak bungalows (remnants of the nineteenth-century postal system) and revisited many of his early research sites from his own graduate days. Rick’s enthusiasm for reconnecting with the people of the region and introducing us to them still resonates with me today, guiding my own fieldwork experiences beyond the inert object to understand the deep interconnections between art, history, and the people who made and continue to interact with the “works of art” we study, works that remain very much alive in the present.

Rick had an incredible gift for open and positive leadership. He hosted ACSAA’s first conference in 1981, and he made sure that the group served as a space of warm, collegial exchange as it grew over the decades. He attended every conference, symposium, workshop, and meeting, seeking out the panels where colleagues and former students were presenting. He would often ask the first question, to draw out commonalities across a diverse panel and also, I came to realize, to facilitate discussion and to give everyone else in the audience time to formulate their own questions. It was primarily at conferences that he would make connections between scholars, a kind of academic matchmaking, if you will. One of the truths of my academic life is that if we have met, Rick probably introduced us. He would stride over, beaming, happy to see you, and then almost immediately say, “there’s someone here you should meet.” Then he would bound off, urging you to follow, to joyfully connect you to a towering senior scholar or newly minted PhD, offering a few choice intellectual threads to solidify the link. Rick understood that the big institutions—CAA prominent among them—only worked because of the dedication of an interconnected group of individuals who recognized their shared commitment to the field. These introductions wove the fabric of these institutions such that when he passed, my email inbox was filled with loving notes and remembrances from colleagues around the world—his colleagues, and also, because of him, my colleagues.

Rick, whose intellectual pursuits focused on the material connections between works of art and people and who cared deeply for makers of objects and sites and the ways in which places and people shaped one another over time, thus continues to connect us even at the moment of his passing. His own post-history has yet to be written, but I have a strong feeling that his energy and presence will be with us at each future academic meeting, in each future encounter. So wonderful to see you! Come, there’s someone here you should meet.