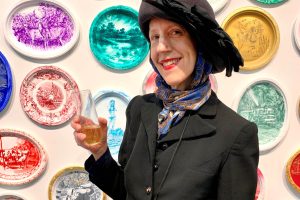 Artist Julie Green in front of one of their pieces in The Armory Show 2020, which included a salon-style presentation of Fashion Plate works, painted on Chinet plates and platters. (Photo by Theo Downes-Le Guin/Upfor Gallery)

Julie Lynn Green was born in 1961 in Yokosuka, Japan to Frederick William (Bill) Green and Jane Green. Green’s birth wasn’t without excitement: their father was airlifted by helicopter off a Navy ship to support Jane during pregnancy complications. Both mother and child were fine. As a child, Green lived in Washington State, Ohio, New Jersey, Illinois, and Iowa, where they attended Des Moines Roosevelt High School, graduating in 1979. From an early age, Green shared their mother’s passion for creative projects, thriving as an artist and performing with a high school mime group. One of Green’s favorite pastimes was to play Scrabble with grandmother “GrandMary.” In 1995, Green married longtime partner Clay Lohmann, who encouraged a lifelong interest in yoga and expanded Green’s artistic pursuits.

Green wrote that they wanted to be a stewardess until age four, but became a painter instead. Green received a B.F.A. and M.F.A. from The University of Kansas, studying with noted artist Roger Shimomura, who remained a lifelong mentor and friend. Green joined the faculty at Oregon State University in Corvallis, Oregon in 2000 as a professor in the Art and Art History Department. While garnering admiration and affection from a generation of students, Green also maintained an active studio practice. Green started their best-known work, a series of paintings on second-hand plates depicting the last meal requests of death row prisoners titled The Last Supper, in 2000. A few weeks before their death, Green decided to end the project at 1,000 plates. The first 800 plates are currently on view at the Bellevue Arts Museum in Bellevue, Washington.

Green worked in a variety of mediums but identified primarily as a painter, often combining humble materials and techniques with art historical traditions. Green painted on linens, Tyvek, and Chinet-brand paper plates as well as paper and canvas, with pigments from sources as diverse as industrial waste byproducts, rare earth elements and 7UP. Awarded a Hallie Ford Fellowship in the Visual Arts from The Ford Family Foundation, Green’s accolades also included grants and fellowships from the Oregon Arts Commission, the ArtPrize 3-D Juried Award, and a Joan Mitchell Foundation Painters and Sculptors Grant. Green’s work was featured in a variety of publications and programs including The New York Times, Rolling Stone, NPR, and PBS, and was exhibited widely in museums and galleries throughout the United States. Green’s final public exhibition in their lifetime, at The Armory Show in New York in 2020, garnered the Presents Award.