CAA is pleased to announce the finalists for the 2009 Charles Rufus Morey Book Award and the Alfred H. Barr, Jr., Award. The winners of both prizes, along with the recipients of other Awards for Distinction, will be announced in mid-December and presented in February during Convocation at the 2009 Annual Conference in Los Angeles.

The Charles Rufus Morey Book Award honors an especially distinguished book in the history of art, published in any language between September 1, 2007, and August 31, 2008. The finalists are:

The Alfred H. Barr, Jr., Award for museum scholarship is presented to the author(s) of an especially distinguished catalogue in the history of art, published between September 1, 2007, and August 31, 2008, under the auspices of a museum, library, or collection. The finalists are:

A second Barr award will be awarded, intended for but not restricted to smaller museums, libraries, or collections. It takes into consideration the size of the collection or exhibition. The two finalists are:

Convocation at the 2009 Annual Conference takes place on Wednesday evening, February 25, 5:30–7:00 PM, in West Hall Meeting Room 502AB at the Los Angeles Convention Center. The event is free and open to the public.

The honoree of the 2009 Distinguished Scholar Session is Svetlana Alpers, a historian of seventeenth-century art and professor emerita of the University of California, Berkeley. Inaugurated in 2001, this Annual Conference session pays tribute to a renowned scholar who has made significant contributions to the field.

After earning a BA from Radcliffe College in 1957, Alpers completed her doctorate in fine arts at Harvard University in 1965. She began teaching at the University of California, Berkeley, in the early sixties and remained there until her retirement in 1994.

Her books—among them The Art of Describing: Dutch Art in the Seventeenth Century (1983); Rembrandt’s Enterprise: The Studio and the Market (1988), which won CAA’s Charles Rufus Morey Book Award in 1990; and Tiepolo and the Pictorial Intelligence (1994), written with Michael Baxandall—have had an enormous impact on the discipline of art history. In 1983, Alpers founded the interdisciplinary journal Representations with Stephen Greenblatt; she remains a corresponding editor to this day.

An artist and a scholar, Alpers, together with James Hyde and the photographer Barney Kulok, recently completed a series of prints, Painting Then For Now. Fragments of Tiepolo at the Ca’ Dolfin, that is based on three paintings in the Metropolitan Museum of Art by the eighteenth-century Venetian artist Giambattista Tiepolo. An exhibition of these works was held at David Krut Projects in New York in 2007 and accompanied by a publication.

Please read Mariët Westermann’s article on Svetlana Alpers and her accomplishments, which is also published in the November 2008 CAA News.

For nearly thirty years, López Luján has worked on the excavations of the Templo Mayor (Grand Temple), a fifteenth-century Aztec pyramid and its surroundings that are located in the heart of the Mexican capital; he has been director of the project since 1991. The temple lies beneath the Zócalo, also known as the Plaza de la Constitución, one of the largest public squares in the world. The project began when a monument to the Moon goddess Coyolxauhqui was found by electrical workers on the site of the old temple. During the last several years, other impressive monuments have been uncovered around the Great Temple of Tenochtitlan, among them the largest Aztec sculpture ever found, that of the Earth goddess Tlaltecuhtli.

In his talk, López Luján will focus on the most recent archaeological discoveries, while giving an overview of the history of archaeology in the Aztec capital. He will also discuss other topics, among them the recovery of the Tlaltecuhtli stone, an iconographic analysis that may unveil this sculpture’s functions and meanings, the rich offerings buried underneath it, and the possible presence of a royal tomb in this area of the sacred precinct.

Currently senior researcher at the Museo del Templo Mayor, where he has worked since 1988, López Luján is also senior professor at the Escuela Nacional de Antropología e Historia (ENAH) and the Escuela Nacional de Conservación, Restauración, y Museografía (ENCRyM) since 1987. He earned his doctorate in archaeology, with highest honors, at the Université de Paris-X in Nanterre in 1998. Before that he attended ENAH from 1983 to 1990, receiving a BA and MA—also with highest honors. López Luján was a fellow in Precolumbian studies in 2005–6 at Dumbarton Oaks in Washington, DC, and received a John S. Simon Guggenheim Fellowship in 2000. He has also taught and researched in Rome and Paris and at Princeton University.

López Luján has written and cowritten many books on the archaeology of Central Mexico. In The Offerings of the Templo Mayor of Tenochtitlan (originally published in Spanish in 1993; revised by the University of New Mexico Press in 2005), he presents the spectacular findings of Templo Mayor Project—masks, jewelry, skeletal remains of jaguars and alligators, statues of gods, precious stones, and human remains—from 1978 to 1997. The first English edition, published by the University Press of Colorado in 1994, was named Outstanding Academic Book by Choice and received the Eugene M. Kayden Humanities Award.

Mexico’s Indigenous Past, authored with Alfredo López Austin (1996; second English edition: University of Oklahoma Press, 2005), offers a panoramic view of the three super-areas of ancient Mexico—Mesoamerica, Aridamerica, and Oasisamerica—which stretched from present-day Costa Rica to what is now the southwestern United States. The book begins more than thirty thousand years ago and ends with European occupation in the sixteenth century.

For more on López Luján and the Templo Mayor, please download Johanna Tuckman’s “In Search of an Aztec King” from the Summer 2008 issue of American Archaeology. 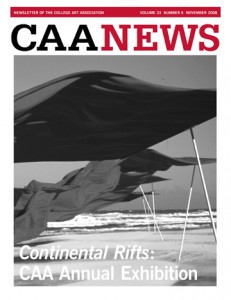 The November CAA News has just been posted to the CAA website. Click on the cover at left to download a PDF of the issue. Printed copies for individual and institutional members will be mailed soon, to arrive in mid-November.

Read about Leonardo López Luján, the renowned archaeologist who is giving the keynote address at Convocation at the 2009 Annual Conference in Los Angeles, and about Continental Rifts: Contemporary Time-Based Works of Africa, the CAA Annual Exhibition at UCLA’s Fowler Museum curated by Mary Nooter Roberts. The issue also contains important conference information, including how to apply to, and become a mentor for, the Artists’ Portfolio Review and Career Development Mentoring programs.

The deadline for submissions to the January issue is November 10, 2008. Please see the newsletter submission guidelines for instructions or write to Christopher Howard, CAA News editor.