The following article was written in response to a call for submissions by CAA’s  International Committee. It is by John Tain, Congyang Xie, Michelle Wong, Cici Wu, and Noopur Desai, all researchers at Asia Art Archive.

In the first few months of this year, one thing that became clear was how deeply divided the world remained and remains, even as globalization brought us all closer physically and virtually.  There have been of course the many overt racist acts around the world, and also the less visible but no less insidious effects of structural racism on individuals and communities of color. There also remains plain ignorance reinforced by geography. In long distance calls and video meetings, it became clear that what people across Asia recognized right away as a cataclysmic life-or-death disaster remained literally and figuratively a faraway concern for many people in the United States and Europe—until it wasn’t anymore.

At Asia Art Archive (AAA), we have seen the drama unfolding firsthand in both Asia and North America.  Our colleagues in Shanghai went into lockdown almost as soon as the news came out of Wuhan, with our main office in Hong Kong soon to follow. For those first few weeks, outpourings of concern, sympathy, and sometimes curiosity accompanied the daily news and dreaded case tallies.  Then, as the pandemic spread, it was our colleagues in New York and then New Delhi who were hit, along with the rest of the world, and it became our turn to send support and supplies when possible. We had already been in the habit of meeting regularly on Zoom as a way to work across distances, but throughout these months, talking with one other online became about more than work. It became a way to bridge the chasms keeping us apart all the more now.  It is in the spirit of those conversations that I have asked my colleagues to share their thoughts, as reminders that whatever the disparities, we must deal with this together.

In early February, two weeks after the shutdown of Wuhan due to the outbreak of the coronavirus, an article was published by Slovenian philosopher Slavoj Žižek titled “Clear Racist Element to Hysteria over New Coronavirus.” Translated into Chinese and circulated through the social media platform WeChat, it quickly became one of the most widely shared texts among contemporary art practitioners in Mainland China. Žižek, who has built a large readership in China over the last decade, began by saying that “Some of us, including myself, would secretly love to be in China’s Wuhan right now, experiencing a real-life, post-apocalyptic movie set.” (https://www.rt.com/op-ed/479970-coronavirus-china-wuhan-hysteria-racist/)

More challenging statements followed. Unsurprisingly, there were all kinds of reactions within the art world, which amplified when more articles were published and circulated via WeChat by other Western thinkers who are more or less known to Chinese art practitioners, including Jean-Luc Nancy, Jacques Rancière, and especially Giorgio Agamben (Fig. 1). But the controversies around Žižek were particularly interesting. If Žižek’s text, as many have pointed out, disregarded the local context in China, the reading and sharing of the article in Chinese was also decontextualizing. The (re-)awareness of the very existence of intellectual borders that so many people tried hard to ignore may be one of the by-products of COVID-19. 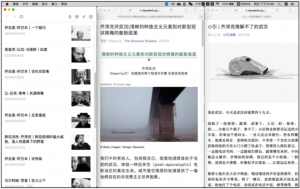 Reading the text in a literal way, Žižek’s fiercest critics denounced the philosopher as naïve, if not delusional, for saying the situation in Wuhan was desirable, for ignoring the real tragedy in Wuhan, and for being indifferent to the dead and to those who were still suffering. Such opinion is based upon a humanistic attitude. The most extreme camp, however, went so far as to reach a nationalist point of view, concluding that Westerners never understand what is happening in China, and that Western theories are irrelevant and not applicable to China’s problems.

Another group of critics, non-nationalists, with a more liberal mindset, were thus highly attentive to Žižek’s call for “a new form of what was once called Communism.” Based on modern and contemporary history of China, this group considers Communism as just the flip side of the coin of authoritarianism. Taking individual freedom as a priority, this group worried that the activity-monitoring technologies used by the government in the name of containing the epidemic would eventually normalize and strengthen total governmental control over society, even after the epidemic ends.

This critical attitude towards authority was shared by a third group of people, who would agree at least partially with Žižek, citing his words that “If there were people in China who attempted to downplay epidemics, they should be ashamed.” In fact, during the first days of the coronavirus outbreak, transparency from authorities was the strongest demand from all of China’s social groups. The protest reached a peak when Li Wenliang, the whistleblower doctor who was forced to keep silent by authorities, was reported to have passed away from the deadly disease on February 7. That night, lit-candle emojis were all over social media. In response to the event, artist Zhang Peili designed a minimalist set of two T-shirts, which are worn frequently by artists and visitors to exhibitions (Fig. 2). 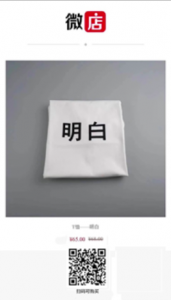 The debates highlight the ideological conflicts in China that have only intensified under the pandemic, though more space would be needed to map the full spectrum of opinions. Perhaps what makes Žižek’s text so appealing to art practitioners in China in the first place is the claim that “there is, however, an unexpected emancipatory prospect hidden in this nightmarish vision,” even if people may have (mis)understood it in a thousand different ways. 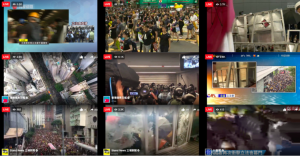 One evening in March 2020, when Hong Kong’s first wave of COVID-19 cases was subsiding, we sat in a friend’s studio to look at the image archive of an artist-run space. “100 Square Feet Park,” or the Park, as we affectionately call it, was once a storefront on Lai Chi Kok Road, facing busy traffic. The image we were looking at was of a documentary exhibition from the Umbrella Movement of 2014. A monitor was placed on a table facing the street level. Pedestrians walking by wondered whether the images shown in the monitor were live or documentary images. It struck me at that 2020 moment, as we looked at the image five years on, that I had forgotten how it felt when livestreaming news—of marches, of roads puffing with smoke, of sparks flying out from long tubes, of people in all sorts of uniforms running—was not yet a norm. I remember an inexplicably overwhelming feeling of looking at the nine images on the split-screen livestreaming for the first time, and I thought my simmering anger would rise to the boiling point if I saw one more Instagram post that attempted to theorize this over-mediation.

For some time now I have pondered the morbidity that is part and parcel of my vocation as a researcher at AAA. It is only half a joke when I describe my job as “talking to old(er) people and working on dead people stuff”. On various occasions I have described archives as haunted and haunting, trains for zombies, and repositories for art that could be undead. I still think about these things when I peer and squint at my computer screen while on Zoom/Jitsi/Skype. During the time leading up to the pandemic, and perhaps also during it (i.e. now), I think often about a generation of practitioners, many of them friends and colleagues who I have met through my work at AAA. I think of how these people, myself included, have knowingly or unknowingly committed ourselves to remembering other people’s lives. Everyone who tells stories of other people’s lives, in this case through dealing with their archives, is learning how to do so along the way, much like writers learning how to write. And as we remember these lives and tell these stories, our stories can become entangled with theirs. Sometimes, it is nice to know you can choose not to do it alone.

Read Part II of the article.