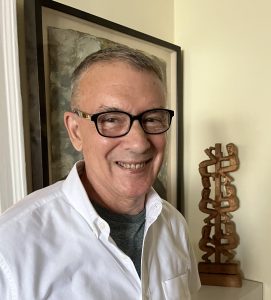 We are delighted to announce the Distinguished Scholar Session at the 111th CAA Annual Conference will honor Edward J. Sullivan. This session will highlight his career and provide an opportunity for dialogue between and among colleagues. This event will be held in-person at the New York Hilton Midtown during the 111th Annual Conference, February 16, 2022 at 4:30–6:00 pm.

Established in 2001, the Distinguished Scholar Session illuminates and celebrates the contributions of senior art historians. The Annual Conference Committee identifies a distinguished scholar each year who then invites a group of colleagues to create the session. The honoree’s involvement is fundamental to the series, which has become a tradition that gives voice to the continuities and ruptures that have shaped art-historical scholarship from the twentieth century into the new millennium.

Access to this program requires registration and is included with an All Access–level registration. Recordings will be accessible to registrants after the event. Register here.

Sullivan’s work has been transformative for the field of art history, especially in relation to the study and elevation of Latin American and Caribbean, Latina/o/x art and artists, and for the advancement of women and the BIPOC and LGBTQIA+ communities in these regions.

Edward J. Sullivan is the Helen Gould Shepard Professor in the History of Art at New York University (Institute of Fine Arts and the Department of Art History). Since receiving his PhD from NYU’s Institute of Fine Arts in 1979 (with a dissertation on painting in Madrid after the death of Velázquez) he has taught at Hunter College, Williams College, the University of Miami, and Trinity College, Dublin. However, his service as professor and administrator at New York University has been the defining aspect of his professional career. Sullivan has mentored hundreds of students at the undergraduate and graduate levels. His fields of research and teaching focus on a wide variety of geographical and temporal areas from Viceregal art in the Americas and the Philippines, to nineteenth-, twentieth-, and twenty-first-century art in Mexico, Central and South America, the United States, and the Caribbean. Sullivan has also had a parallel career as an independent curator and has worked on exhibitions in museums and cultural institutions throughout the US, Latin America, and Europe. He is the author of more than thirty books and exhibition catalogs, among which are The Language of Objects in the Art of the Americas (Yale University Press, 2007), Fragile Demon: Juan Soriano in Mexico 1935–1950 (Philadelphia Museum of Art, 2008), Continental Shifts: The Art of Edouard Duval Carrié (Haitian Cultural Institute 2008), Nueva York 1613–1945 (Scala Books, 2010), From San Juan to Paris and Back: Francisco Oller and Caribbean Art in the Era of impressionism (Yale University Press, 2014), Making the Americas Modern: Hemispheric Art 1910–1960 (Laurence King, 2018), and Brazilian Modern: The Living Art of Roberto Burle Marx (New York Botanical Garden, 2018).