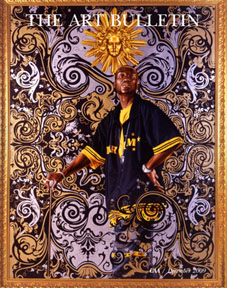 The December 2009 issue of The Art Bulletin, the leading publication of art-historical scholarship, has just been published. It will be mailed to those CAA members who elect to receive it, and to all institutional members.

For the first time, a work of twenty-first-century art graces the cover of the esteemed journal—Kehinde Wiley’s Portrait of Andries Stilte (2005). The painting accompanies an essay by Krista Thompson exploring how contemporary artists such as Wiley and Luis Gispert combine the visual language of hip-hop with late Renaissance and Baroque painting techniques.

Four essays precede Thompson’s. Leading off is Michael Schreffler, who analyzes how sixteenth- and seventeenth-century Spaniards described the practice of Aztec painting by looking through the lens of European art theory. Next, Emma Barker contends that Jean-Baptiste Greuze evokes both the innocence and vulnerability of children in his A Child Playing with a Dog, while implicating the viewer in the child’s fate.

Matthew Rampley’s essay expresses an opposing view of the Vienna school of art history, not as progressive and aesthetically liberal, but as a proponent of an imperialist outlook, related to the cultural politics of Austria-Hungary in the early-twentieth-century. The next contributor is Roberta Wue, who investigates the ways late-nineteenth-century Chinese artists positioned themselves in the marketplace through the classifieds in the Shanghai newspaper Shenbao. She also examines the changing relationship between artists and urban audiences in the late Qing era.

The December issue of The Art Bulletin also contains six reviews of books about tapestries at the Tudor court, engravings of Native American Indians, the gardens of Versailles and panoramic landscape painting, Buckminster Fuller, Tony Conrad, and issues on museum ownership of antiquities. Please read the full table of contents for more details.