The following article was written in response to a call for submissions by CAA’s International Committee. It is by Swati Chembakur, an architectural historian at Jnanapravaha, a center for the arts in Mumbai, India. The author is also a 2019 alumna of the CAA-Getty International Program. 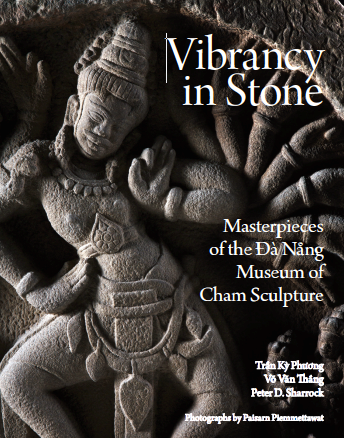 In 2018, the University of London’s School of Oriental and African Studies (SOAS) partnered with the Đà Nẵng Museum of Cham Sculpture in central Vietnam to produce a remarkable and visually striking centenary catalogue of its world-renowned collection of the sacred arts of the Cham people of Vietnam. The publication of Vibrancy in Stone: Masterpieces of the Đà Nẵng Museum of Cham Sculpture was timed to coincide with the renovation and expansion of the museum.

Beginning in the second century CE, settlements appeared along the central coast of what became Vietnam. The Chams probably migrated over the ocean from Borneo and were accomplished navigators. Their ports were the first call for any ship heading from China to India and the Arab world. Their role in the medieval maritime trade grew steadily and reached an apogee in the fourteenth and fifteenth centuries, when the great neighboring empire of Cambodia declined. The prosperity won from trade led to large scale temple construction earlier than the Cambodians. 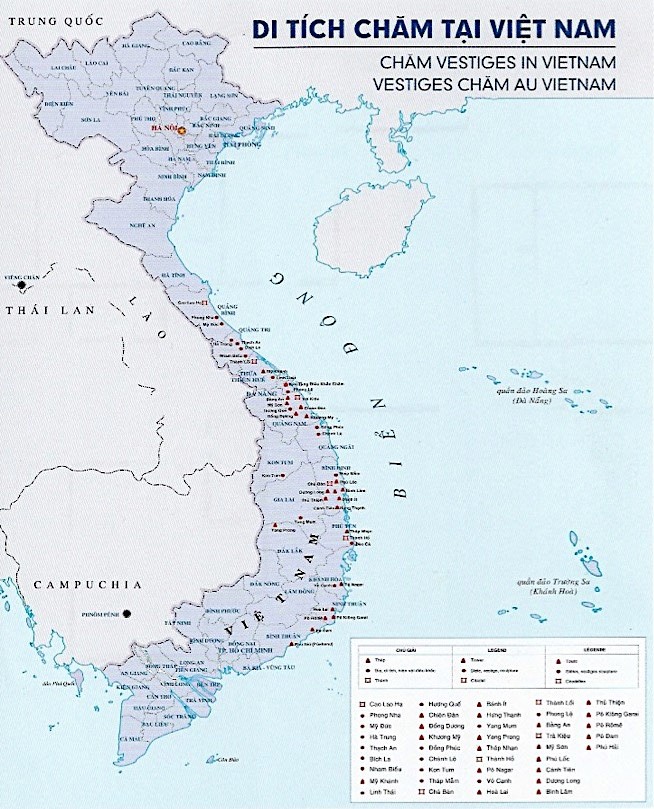 When tourism resumed in Vietnam after the wars of the twentieth century, the museum quickly became a prime attraction in the port city of Đà Nẵng. It is the world’s only museum devoted exclusively to the art of ancient Champa, the name given to the civilization of the Cham people. With 500 objects on display, its collection far outnumbers those in the Hanoi and Ho chi Minh City History museums, as well as the Musée Guimet in Paris. 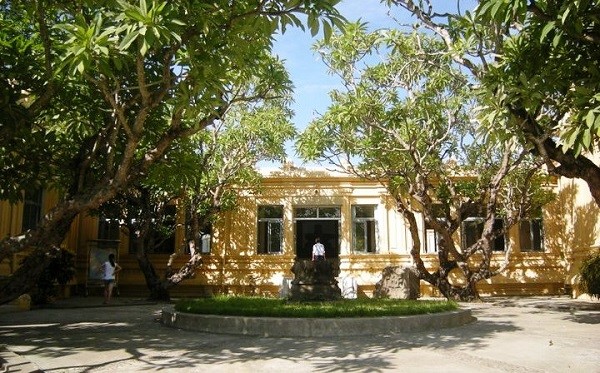 In the late nineteenth century, fifty sculptures were gathered by a French colonial administrator and amateur/enthusiastic collector, Charles Lemire, in a public garden at Tourane (Đà Nẵng), forming the embryo of the future museum collection. Some years later, French architect and archaeologist Henri Parmentier took charge of the neglected artworks and proposed a museum for their protection, which opened in 1919 (Fig. 2). He compiled the first comprehensive catalogue.

French colonial research formed the basis of Cham studies. Today a growing number of Vietnamese archaeologists and art historians are taking an active interest in this subject, expanding our understanding of the ancient art. Ethnic Cham scholars still remain few in number. Almost seventy years after Parmentier’s catalogue, a short guidebook to the museum was published about Cham history and art (Trần Kỳ Phương, 1987). It marked the first catalogue of the collection compiled by Vietnamese researchers and highlighted the link between Vietnamese and French research. After the devastating twentieth-century wars in Vietnam, some of the objects in Parmentier’s 1919 catalogue had disappeared, been damaged, or moved to other institutions. At the same time, many recently discovered artifacts have been added to the museum inventory.

Knowledge of Champa’s history, culture, and art, and an appreciation of its richness and uniqueness, has gradually progressed with the accumulation of new data and the engagement of various scholarly disciplines by both national and international scholars. Champa studies no longer appear in only French-language journals, as in the early twentieth century, but now attract a growing number of scholars from Europe, Asia, and North America, who work alongside Vietnamese experts.

Vibrancy in Stone is organized into two parts. Part I includes fourteen essays about the history and culture of Champa by Vietnamese and international scholars. Part II presents a stunningly illustrated chronology of Cham sculpture accompanied by meticulous descriptions and comments by contemporary scholars.

The introductory essay by museum director Vo Văn Thắng discusses the history of the museum, its collection, changing installations over the years, and the current renovation and expansion of the building. Subsequent essays by Kenneth Hall, John Whitmore and Đỗ Trường Giang address the importance of several Champa ports extending along the central Vietnam coast and their active role in the maritime trade network. Champa was probably never a unified state or kingdom but rather a series of loosely linked smaller polities. Its capitals were widely separated settlements on different parts of the coast, which took turns assuming hegemony over others.

Whitmore’s essay delineates fully for the first time the rise of Vijaya (in today’s Bình Đinh province) as the culture’s capital in the ninth century to its sudden demise in the fifteenth century.

Several essays address the Hindu-Buddhist religion, its rituals, archeology, and inscribed objects (by Shivani Kapoor, Ann-Valérie Schweyer, John Guy, Arlo Griffiths, Lâm Thị Mỹ Dung, and—full  disclosure—myself) while others (by Trần Kỳ Phương and Parul Pandya Dhar) focus on the architecture, taking the reader through the history of Cham temples and highlighting the evolution of key construction techniques and design features that produced a series of tall, distinctive and elegant brick towers along the coastline (Fig. 3). 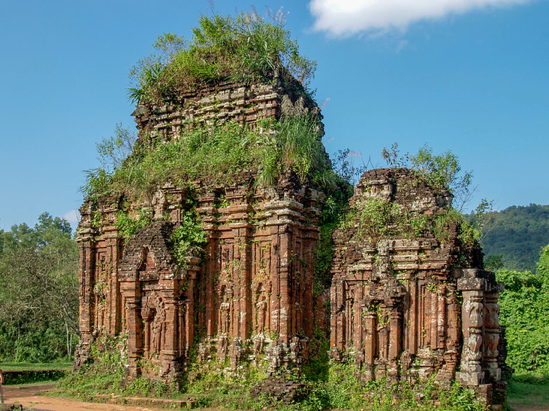 The iconography of the beautiful and vibrant Cham sculptures erected in these towers—referenced in the catalogue title—is the subject of chapters by Thierry Zéphir, Grace Chiao-Hui Tu, and Peter D. Sharrock. Cham art has hitherto been almost exclusively studied through an Indic lens but Hui-Tu’s work brings out many new and unseen Sinitic aspects in Cham sacred art. For example, a ninth century monumental sandstone Buddha from Đồng Dương monastery is seated in the “European” position with pendant feet and palms resting on the knees (Fig. 4). While Buddhas seated with pendant legs can be found in Indian, Southeast Asian, and Chinese Buddhist art traditions, this particular hand posture is seen only in China and Đồng Dương. 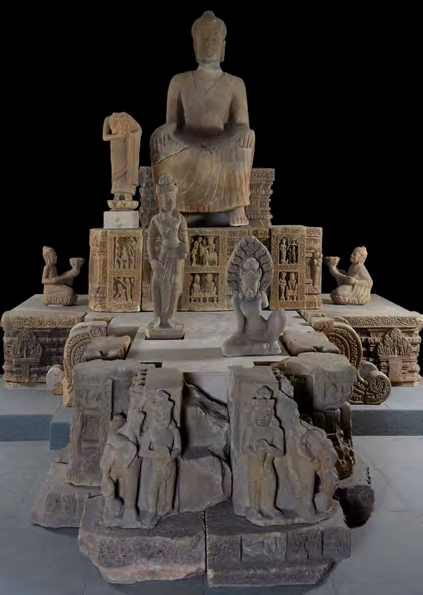 The question of the relationship between Cham and neighboring Khmers forms the core of the paper by Peter D. Sharrock. Addressing the beautiful Khmer bronze of a naga-enthroned Buddha discovered by the French in the main Cham temple outside Vijaya, he points out that this icon was never part of Cham iconography. He then uses art historical and epigraphic evidence to untie a series of long-distorting knots in the history of the Khmer-Cham relationship.

Part II of Vibrancy in Stone focuses on masterpieces of the museum, one of which is the beautiful bronze illustrated in Figure 5, found in the Đồng Dương monastery in 1978. Earlier labelled as Tārā or Prajñāparāmita, here it has been correctly identified as the female aspect of Avalokitesvara and the main cult image of the monastery. 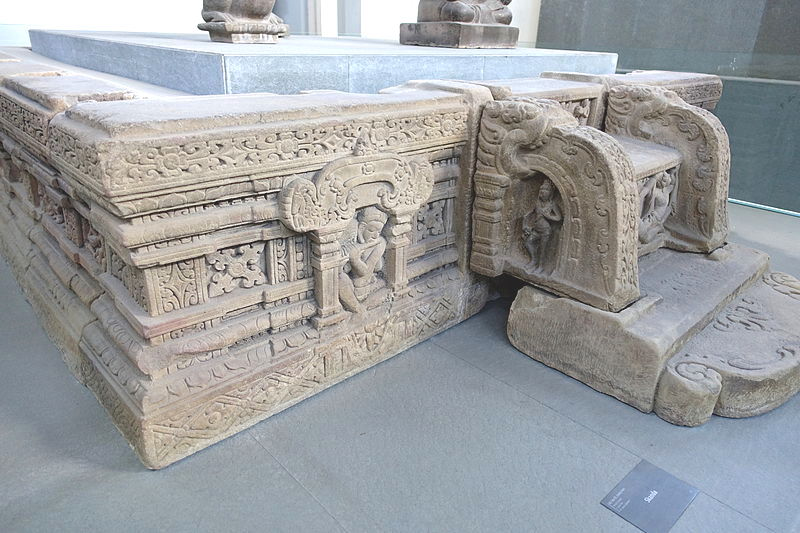 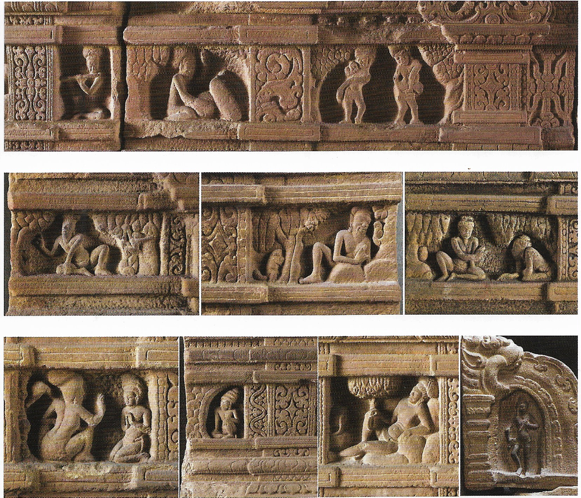 Figure 6b. Details of the ascetic activities depicted on the Mỹ Sơn pedestal. Photo: Paisarn Piemmettawat 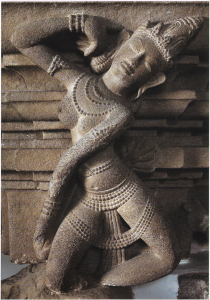 Vibrancy in Stone brings together some of the most priceless and rare works of Cham art. As such, it proclaims the value and artistry of works by the Cham people whose heirs today are an ethnic minority in Vietnam. Equally important, it gathers together these beautiful and rare works of art as a resource for scholars, students, and connoisseurs alike.