This is Part II of an article that began last week in CAA News. It continues the coverage of life and work at the Asia Art Archive during the COVID-19 pandemic.

New York declared a state of emergency on March 7, 2020. I couldn’t foresee then that this would be my last chance to be in an art museum for many months. I was looking at the Portrait of America by Diego Rivera in the Whitney Museum, which he painted in 1933 for the Communist New Workers School in New York. The text panel said, “In keeping with the politics of the school, Rivera chose not to celebrate American values but instead to highlight uncomfortable truths about the class struggle and the country’s violence against African Americans.” In 1929, the crash of the US stock market caused many to question a capitalist system that seemed no longer compatible with the country’s democratic ideals. Artists resolved to use their art to effect change. Looking back at this period in history, when Mexican muralists were invited to make artworks by the State, it’s striking how artists were allowed to use their creativity and imagination so freely. They also imbued their art with a social role by depicting the real struggle of workers. It was uplifting.

A month before March 7, a memorial gathering for the Chinese doctor Li Wenliang was quietly held in Central Park (Fig. 1). The event was organized to stand against the further erosion of free speech in Mainland China. The park was not crowded. People were dispersed into smaller groups on a sunny afternoon, with murmurs, sighs, and tears. The flowers and banners carried words from the bottom of people’s hearts. At that moment, there was a hope that a little change could happen this time. 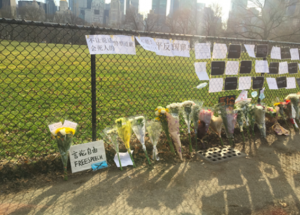 After March 7, events seemed to accelerate, further unveiling lies, alongside vulnerability, rage and confusion. A wound was suddenly ripped open, resulting in a flowing river of blood. Sad news stories kept coming, one after another, from Italy, Iran, the UK, the Philippines, and the rest of the world. Airlines were collapsing. Small businesses were at risk. Middle-class and working-class people started worrying about their future. All of a sudden, restaurant workers, airline employees, and gig workers were on the verge of being laid off. Immigrants and undocumented residents without families were most at risk. More than ever, we learned that our social welfare was deeply tied to our immigration status in this country. We wondered, how are we going to collectively survive other crises, such as the huge environmental shifts and resulting displacements, that will come in the future? 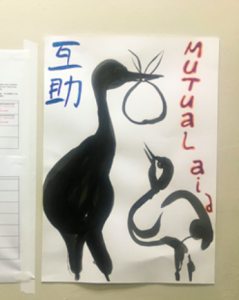 For a short time, New York became a site of discombobulation, isolation, and helplessness. The city was pale and empty. Workers in the arts, who were lucky enough to keep their jobs, started to work from home. Essential workers, including doctors, nurses, delivery drivers, and home caretakers, were getting off from work shattered. After a period of panic, some artists started to break out of their isolation and regather in small volunteer communities, helping food pantries, protesting against evictions, and organizing mask donations, all built upon the principle of Mutual Aid Community Agreements: “We Keep Us Safe” (Fig. 2).

The city began returning, bursting with idealistic energy. Most precious for the Asia Art Archive in America during this time has been the support and care we have been able to provide for each other. Invaluable weekly virtual meetings helped us stay connected and in dialogue, discussing together our changing thoughts throughout this critical time.

Our research collection, the Joan Lebold Cohen Archive Phase II was successfully launched online in the height of lockdown, on April 1. Three years after the launch of Phase I, the trips Joan Cohen took to China from the 1970s–2000s are finally fully available to explore and learn from: 16,453 color photographs of artists, artworks, studios, academies, exhibitions and scenes of everyday life. These images of a past world travelled through the years and arrived at a moment when nations are drifting apart towards isolation. In the midst of reimagining a new spatiotemporal organization of the world, the looks, smiles, and gestures Joan captured on film brought to mind air and light (Fig. 3). 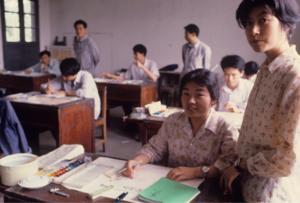 In Beijing and Hong Kong before returning to New York in February, I was saddened to have witnessed the virus hitting the collective body multiple times. Working through the Joan Lebold Cohen Archive was a healing process, to imagine myself traveling in time and giving light to the gaps of multiple pasts. I want to end here with a quote from the essay Solidarity/Susceptibility by Judith Butler (Social Text, 2018), from her remarks on José Muñoz, the Cuban American scholar of performance and queer studies who died in 2013, as an inspiration to think about archives and the new imaginary: “The potentialities that appear as rips and tears in the otherwise seamless future of no future for those abandoned by progress are immanent and furtive possibilities within the present, indicating that this time is also another time, and always has been; it opens toward a past and a future even when, politically, the force of oblivion seeks to cover over those very openings.”

Today, we are experiencing an unprecedented moment as we brave the COVID-19 crisis across the world. In India, the situation is complex, similar to many parts of the world, bearing multiple strands, with implications for various aspects of our lives. When the pandemic hit India in March of this year, though early cases were found in January, the country was going through a massive political movement demanding democratic constitutional rights. The announcement of a sudden lockdown across the country on March 22 resulted in the suspension of all social gatherings including, most importantly, the ongoing nationwide sit-in protests against the Citizenship Amendment Act and the National Register of Citizens in various cities and towns. 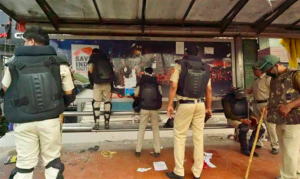 Figure 1. Graffiti and artworks at protest sites, removed by the police during the lockdown, “The Logical Indian,” March 27, 2020. Photo: Hindustan Times

In the midst of panic and uncertainty in conjunction with the mismanagement of the crisis, the previous two months began to appear a distant past with the erasure of politics and the transformation of public space during the lockdown. In effect, the public space was rather transformed, with images of a mass exodus as hundreds of thousands of migrant workers journeyed home from big cities after the closing down of markets, manufacturing units, and various laborer jobs. Combined with a sense of amnesia brought on by the spectacle surrounding the pandemic, the government actions (mis)used the situation to crackdown on dissenting voices, either by arresting social and political activists, defacing artworks and graffiti at protest sites (Fig. 1),  or by exercising certain restrictions on media. Taken together these actions have highlighted the systemic inequality and repressive nature of the current regime.

Surrounded by this grave situation, various arts organizations, artists, and museums have had to reconfigure themselves. Several exhibitions and programs were canceled or postponed, and young arts practitioners moved back to their birthplaces or are struggling to survive in metropolitan centers like Delhi or Mumbai. Responding to the severity of the crisis, many arts practitioners and arts organizations have stepped up to create support systems, including  grants for young artists, online displays of artworks, and the formation of chain-systems, wherein artists buy each other’s work. The arts community also created online auctions and other fundraising events to contribute to the relief work for migrant workers and other vulnerable populations. 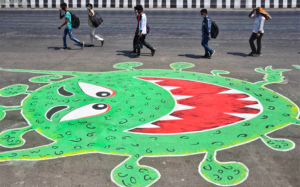 Figure 2. Migrant workers walk in front of a coronavirus graffiti in Mumbai, May 14, 2020. Photo: The Hindu

Physical distancing quickly resulted in digital proximity with the arrival of webinars and online exhibitions organized by museums and galleries, although the graph of the webinars seems to be “flattening” in recent times! However, the digital world has become an intrinsic part of our lives, whether it is through virtual studio visits, webinars, and simulated gallery tours or by creating online resources for teaching and learning. In terms of art education, studio-based practice has been replaced by experimentation with the digital, though only at a few schools, as most of them do not have the resources to run online programs.  Nevertheless, there have been important instances where students have used digital platforms to organize their annual exhibitions, which are required for graduation, and which for the most part have not been able to take place physically. Though physical space is crucial in contemporary art practice, this intense effort to use alternative platforms has certainly paved the way for forming new aesthetic possibilities.

While we all are grappling with this strange time, at Asia Art Archive in India we continue building our online research collections and shaping new projects. As an online platform, we have been able to continue several aspects of our work by sharing digital resources and programming via our website. Despite this, we have also faced challenges in light of changing situations. Though our collections are available online, the groundwork to build those collections requires in-person visits to archives and libraries, access to review personal archives, resources to digitize the documents, and programs to introduce the archival collections; most of these activities have been brought to a halt for now. In the meantime, we are maintaining our spirits by planning and carrying out whatever aspects of our work we can, keeping in mind the need for physical distancing. At the same we are recalibrating our working methods as we venture into the “new normal.”