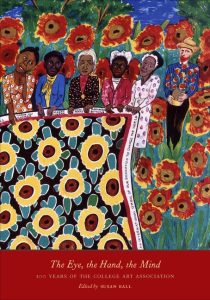 Cover of The Eye, the Hand, the Mind: 100 Years of the College Art Association, edited by Susan Ball (Rutgers, 2011) featuring detail of Faith Ringgold, The Sunflower Quilting Bee at Arles, 1996

On November 4, CAA had the privilege to host the digital event celebrating The Eye, the Hand, the Mind: 100 Years of the College Art Association. If you were unable to make it, please watch this recording of the event.

Published in 2010, this book documents and examines over a century of CAA’s history. The event features Susan Ball, editor of the publication, and author Julia Sienkewicz, who will discuss their contributions to the project and how topics and issues have shifted and changed in the last decade. A conversation between CAA CEO and Executive Director, Meme Omogbai, and art historian, Anne Higonnet, will reflect on these insights and CAA’s plans for the future. This conversation also will honor Robert L. Herbert, the dedicatee of the book, and will discuss how his legacy has impacted the field and so many at CAA.

Following this event, CAA will release a series of short videos from authors discussing their specific chapters within the book, including Julia A. Sienkewicz, Judith Brodsky, Ellen Levy, and Karen Leader. Their presentations will cover a range of topics concerning CAA’s history, from advocacy and feminist initiatives to CAA’s past exhibition programs and conferences.

In 1911 the College Art Association began with a small group of college art teachers whose single mission was to promote “art interests in all divisions of American colleges and universities.” One hundred years later the CAA, as it is commonly known, is as diverse as the decades that witnessed its maturity and growth. As leadership and membership grew dynamically, art and art history professors were joined by non-academic visual artists and art historians, museum professionals, art librarians, visual resource curators, independent scholars and artists, collectors, dealers, conservators, and non-college educators.

The Eye, the Hand, the Mind is a collaborative journey, filled with pictorial mementoes and enlivening stories and anecdotes. In these essays readers discover the important role CAA played in major issues in higher education such as curriculum development, preservation of world monuments, workforce issues and market equity, intellectual property and free speech, capturing conflicts and reconciliations inherent among artists and art historians, pedagogical approaches and critical interpretations/interventions as played out in association publications, annual conferences, advocacy efforts, and governance.

Celebrating the centennial of CAA members and milestones, Susan Ball and renowned contributors honor the organization’s complex history which, in part, also represents many learned societies and the humanities over the last one hundred years.

Susan Ball, Ph.D.:  Susan Ball edited The Eye, the Hand, the Mind. Ball holds a Ph.D. in art and architectural history from Yale University and holds over 35 years of professional experience – as a professor, scholar, museum professional and nonprofit agency director. Ball served as Interim Director of Programs at the New York Foundation for the Arts (NYFA). Prior, she was Executive Director at the College Art Association, Professor of Art History at the University of Delaware, the Director of Government and Foundation Affairs at the Art Institute of Chicago, and a consultant with the Shelley and Donald Rubin Foundation. As an author and editor, she has contributed significant works of scholarship in her field, such as The Profitable Artist: A Handbook for All Artists in the Literary, Media, Performing, and Visual Arts with Peter Cobb and Felicity Hogan (Allworth Press, 2011), and has served on many boards.

Julia A. Sienkewicz, PhD: In The Eye, the Hand, the Mind, Sienkewicz authored the chapter, “Uniting the Arts and the Academy: A History of the CAA Annual Conference.”  Sienkewicz, an Associate Professor of Art History at Roanoke College, holds both an MA and PhD from the University of Illinois and a BA from Mt. Holyoke College. She is the author of Epic Landscapes: Benjamin Henry Latrobe and the Art of Watercolor (2019). Currently, she is at work on the monograph Forms of White Hegemony: Transnational Sculpture, Racialized Identity, and the Torch of Civilization, 1836-1865, research that has been recognized with the award of a Terra Foundation Fellowship at the American Academy in Rome. She recently edited a special issue of the Art History Pedagogy and Practice journal entitled, “Teaching and Learning the Art History of the United States.” Sienkewicz served in leadership roles at CAA for more than a decade, most recently concluding a term on the Board of Directors as the VP for Committees.

Anne Higonnet, Ph.D.: Anne Higonnet is now Professor of Art History at Barnard College of Columbia University. She received her BA from Harvard College in 1980 and her PhD from Yale University in 1988 under Robert Herbert.  Her work has been supported by Getty, Guggenheim, and Social Science Research Council fellowships, as well as by grants from the Mellon, Howard and Kress Foundations. In 2019-2020 she was a Fellow at the Harvard-Radcliffe Institute.  She has published many essays, five print books, and two book-scale digital projects, is a prize-winning teacher, and has lectured widely, including in the Live Arts program of the Met Museum.  One of her courses, Clothing, is among the most popular at Barnard and Columbia. She is now writing a book under contract with Norton: Three Fashion Stars and the Revolution They Wore; Joséphine Bonaparte, Juliette Récamier, Térésia Tallien.

Meme Omogbai, CAA Executive Director and CEO: Before joining CAA, Omogbai served as a member and past board chair of the New Jersey Historic Trust, one of four landmark entities dedicated to preservation of the state’s historic and cultural heritage, and Montclair State University’s Advisory Board. Named one of 25 Influential Black Women in Business by The Network Journal, Meme has over twenty-five years of experience in corporate, government, higher education, and museum sectors. As the first American of African descent to chair the American Alliance of Museums (AAM), Omogbai led an initiative to rebrand the AAM as a global, inclusive alliance. While COO and trustee, she spearheaded a major transformation in operating performance at the Newark Museum. During her time as deputy assistant chancellor of New Jersey’s Department of Higher Education, Omogbai received legislative acknowledgment and was recognized with the New Jersey Meritorious Service award for her work on college affordability initiatives for families. Omogbai received her MBA from Rutgers University and holds a CPA. She did postgraduate work at Harvard University’s executive management program and has earned the designation of Chartered Global Management Accountant. She studied global museum executive leadership at the J. Paul Getty Trust Museum Leadership Institute, where she also served on the faculty.