Recent Deaths in the Arts

CAA recognizes the lifetime professional and personal achievements of the following artists, art historians, curators, educators, and critics, who recently passed away.

Read all past obituaries in the arts on the CAA website.

Filed under: Obituaries, People in the News —

Since the mid-1950s, Los Angeles has been a hotbed of new art and groundbreaking galleries, museums, and other art spaces and institutions. Throughout the greater LA area are many pockets of art-world panache, from Malibu to Culver City to Chinatown. With the 2009 conference headquartered at the Los Angeles Convention Center in downtown LA, we thought we would start with a focus on the robust gallery culture there and in its subdistricts.

A short walk or cab ride from the conference, Chinatown has a long history of culture and commerce dating back to the late nineteenth century. In the 1930s, Chinatown’s central plaza saw development as a tourist attraction with the creative help of Hollywood set designers. The cinematic simulacrum of Chung King Road is now the high street of the area’s gallery scene. While the art that is shown is cutting-edge contemporary, the galleries still pay tribute to the culture and history of Chinatown, often repurposing the original storefront names to give us spaces called China Art Objects, Black Dragon Society, and the Happy Lion.

A nonprofit organization since 2003, Telic Arts Exchange serves as a platform for exhibitions, performances, screenings, lectures, and discussions on art, architecture, and media, with an emphasis on social exchange, interactivity, and public participation. From its basement location, Betalevel similarly operates as a studio, club, stage, and screening space. Its members are artists, programmers, writers, designers, agitprop specialists, filmmakers, and reverse engineers.

Black Dragon Society is another uber-hip gallery that focuses largely on painting, such as the faux-naïve, Mad magazine–inspired work of Steve Canaday and the informal portraiture of Raffi Kalenderian. China Art Objects features artists such as Walead Beshty, Pae White, and Bjorn Copeland, who also performs in the noise band Black Dice.

Kontainer has a painting-heavy roster, and Acuna-Hansen Gallery presents a number of drawing specialists, such as Eric Beltz and Tracy Nakayama, in addition to artists who work in photography and sculpture. The Fifth Floor Gallery and David Salow Gallery were two of nine Chinatown venues that hosted CalArts’ MFA exhibition, We Want a New Object, in May 2008. Both feature artists working in diverse mediums.

Mesler and Hug Gallery is big on multimedia installation, and Bonelli Contemporary maintains an Italian presence in Chinatown, showing mostly painting and drawing. High Energy Constructs is an exhibition and performance venue, and the Mountain Bar, a nightclub and gallery space, is a central hangout spot for artists and anchors the area.

Another area downtown, located just a short walk or bus ride from the convention-center complex, is Gallery Row. A seven-block concentration of galleries in the very center of downtown, Gallery Row was designated by city council in 2003 as a thriving, pedestrian-friendly, culturally abundant, urban locus of art and nightlife. In a few short years, this experiment in urban planning has changed these blocks into a spontaneous laboratory of street art and creative culture, with fashion shows, live music, spoken word, and traditional art exhibitions. The following galleries are located in or near this area.

Pharmaka is a nonprofit gallery in downtown Los Angeles

Located in the main lobby of the Banco Popular Building, *BANK has developed a distinctive curatorial platform showcasing emerging and midcareer artists, such as the work of Paul Butler, known not only for his own work but also for his Collage Parties. MATERIAL, a critical arts journal, is a creation of the *BANK artist Kim Schoen and Ginny Cook. Similarly, a new nonprofit organization called Phantom Galleries LA places temporary art installations in vacant storefront windows throughout Los Angeles County; its call for proposals is open ended.

Jail presents solid curated group shows, including Hef, dedicated to the founder of Playboy magazine, as well as solo exhibitions by emerging artists such as Christopher Michlig. Bert Green Fine Art focuses on contemporary painting and work on paper. Recently shown were works by the underground fanzine legend Dame Darcy and the horror novelist Clive Barker.

Other neighborhood highlights include Compact Space, which recently moved to the area, and De Soto, which is strong on photography. The work of gallery artist Connie Samaras appeared on the cover of the Summer 2008 issue of X-TRA, a Los Angeles–based quarterly art magazine.

Rounding out the recommended downtown galleries is the Los Angeles Center for Digital Art, which in addition to staging group exhibitions offers large-format printing from artists’ and photographers’ digital files with an Epson 9800 archival printer.

There’s lots more to downtown Los Angeles, with the Museum of Contemporary Art, the REDCAT Galleries and Theater, and the Frank Gehry–designed Walt Disney Concert Hall. Keep an eye out in upcoming issues of CAA News and at www.collegeart.org to see the growing list of galleries, previews, and highlights of the Los Angeles scene, a West Coast bastion of culture and cool.

The Conference Survival Guide has just been published as a downloadable PDF. The guide offers guidance to students, emerging professionals, and others attending their first conference for traveling to Los Angeles and navigating conference activities. Suggestions provided in the guide include tips for finding travel funds, options for budget travel, suggestions for lodging and dining, information on transportation in Los Angeles, listings of events and ways to actively participate in the conference, and guidelines for successful networking during the four-day event. The Conference Survival Guide is an annual publication put together by CAA’s Student and Emerging Professionals Committee. For more details, contact Vanessa Jalet, CAA executive assistant.

CAA renews memberships on a rolling basis, much like a magazine subscription. However, because the previous renewal schedule before 2005 was based on the calendar year, many current individual and institutional memberships expire on December 31, 2008. Your access to essential online resources, printed materials, and journals, and to the 2009 Board of Directors election, is available only with a current membership.

Candidates for the 2009 Board of Directors Election

The 2008 Nominating Committee submits its slate of six candidates to serve on the CAA Board of Directors from 2009 to 2013. Please read each candidate’s statement and biography—and watch their special video introductions—before casting your vote. Voting begins on January 5, 2009, and ends on February 27.

From the Art History Newsletter:

In the Wall Street Journal, we read that according to “a year-long survey of 1.2 million people with only a bachelor’s degree by PayScale Inc.,” art-history majors have a median starting salary of $35,800. Ten years after graduation, their median salary is $64,900. In that respect, they beat majors in anthropology, biology, criminal justice, drama, education, English, forestry, graphic design, health care administration, hospitality, interior design, music, nutrition, psychology, religion, sociology, and Spanish. That said, philosophy majors are earning a median $81,200 ten years out.

CIHA Papers to Be Published in 2009 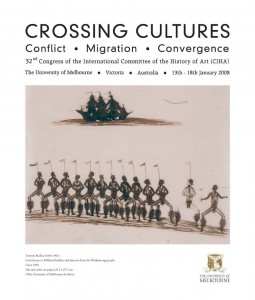 Conference papers from the 32nd Congress of the International Committee of the History of Art (CIHA), which convened in Melbourne, Australia, in January 2008, will soon be published by Miegunyah Press. Entitled Crossing Cultures: Conflict, Migration and Convergence, the book is edited by the conference convenor Jaynie Anderson.

Art and its history are not only created but are also discussed in one form or another on all the inhabited continents of the earth. Globalism has also assumed an art-historical aspect: indeed it has been described as art history’s most pressing issue. The themes are conflict, migration, and convergence in the visual, symbolic, and artistic exchanges between cultures throughout history. This publication will explore these themes.

This bound book is only available via a preorder form. It will not be available from any other outlets. Orders for this publication will be accepted until February 27, 2009—don’t miss this opportunity! Individual chapters of the book will also be available to purchase and download online in June 2009.

The Chronicle of Higher Education has published an article on what “Conference Rookies” should expect while on job hunts at academic conferences. Two academic career experts—Julie Miller Vick of the University of Pennsylvania and Jennifer S. Furlong of Columbia University’s Center for Career Education—provide tips and pointers on scheduling interviews, eating, organizing materials, and more.

CAA will soon publish its Career Services Guide on the conference website. The document will also appear in the forthcoming January issue of CAA News and be available at Orientation and in the Candidate Center at the 2009 Annual Conference in Los Angeles. In the meantime, both job candidates and interviewers are encouraged to review CAA’s two Standards and Guidelines dealing with the job search—Etiquette for CAA Interviewers and Standards for Professional Placement—as well as to read CAA’s recommendations for preparing CVs and résumés for artists, art historians, and museum professionals.

The Arts Education Network Weekly News reports that several national arts and arts education organizations have submitted a policy brief on the arts to President-elect Barack Obama and his transition team. The brief covers recommendations for the National Endowment for the Arts; cultural exchange; arts education in school, work, and life; national service and the arts; and the role of the arts in nonprofit communities. The brief also requests that the incoming president appoint a senior-level administration official to coordinate arts and cultural policy.

According to the brief, “The arts and cultural community welcomes the opportunity to communicate with President-Elect Obama and his staff in re-imagining how the federal government can inspire and support creativity in communities nationwide through robust policies that advance participation in the arts for all Americans.”

The following are the recommendations proposed for arts education:

The Arts Education Network Weekly News reports that several national arts and arts education organizations have submitted a policy brief on the arts to President-elect Barack Obama and his transition team. The brief covers recommendations for the National Endowment for the Arts; cultural exchange; arts education in school, work, and life; national service and the arts; and the role of the arts in nonprofit communities. The brief also requests that the incoming president appoint a senior-level administration official to coordinate arts and cultural policy.

According to the brief, “The arts and cultural community welcomes the opportunity to communicate with President-Elect Obama and his staff in re-imagining how the federal government can inspire and support creativity in communities nationwide through robust policies that advance participation in the arts for all Americans.”

The following are the recommendations proposed for arts education: