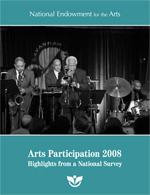 Joan Shigekawa, senior deputy chairman of the National Endowment for the Arts (NEA), convened a roundtable discussion yesterday with national arts service organizations, regional arts organizations, and NEA staff to discuss the NEA’s 2008 Survey of Public Participation in the Arts, the nation’s largest and most representative study of adults’ arts participation habits.

Representatives from forty organizations participated, including Linda Downs, CAA executive director, as well as leaders from the Association of Art Museum Directors, Dance/USA, the Future of Music Coalition, the National Association of Latino Art and Culture, the National Center for Creativity in Aging, the National Network for Folk Arts in Education, and the New England Foundation for the Arts.

The convening began with a greeting from NEA chairman Rocco Landesman, followed by a summary presentation of the survey’s findings from Sunil Iyengar, NEA director of research. Representatives from three organizations offered formal responses—Helen De Michiel from the National Alliance for Media Arts and Culture, Carlton Turner from Alternate ROOTS, and Jesse Rosen from the League of American Orchestras—following which Shigekawa led a frank, freewheeling conversation about how these findings should inform the arts community’s work going forward, as well as how the survey should be expanded and refined in the future.

“It is important that the National Endowment for the Arts have regular conversation with the arts community about how the public participates in the arts, and what we can do to connect more Americans with more art, more often,” said Shigekawa. “Our research shows a strong connection between arts participation and civic participation, but art only works when the public participates. Today was a chance for the NEA staff to hear and learn from the service organizations that work with our country’s arts organizations, and we look forward to many more such opportunities.”

The 2008 Survey of Public Participation in the Arts, which was conducted in partnership with the US Census Bureau, asked more than 18,000 people 18 years of age and older about their frequency of arts engagement. CAA reported on the findings of the survey, which has been conducted five times since 1982, in June. Here are a few more statistics about American participation in the arts:

A related research note on arts participation measured in regions and states will be released soon. The NEA will release additional topic-specific reports on the roles of age, race and ethnicity, arts learning, media use, and arts creation and performance. The survey, geographic research note, questionnaire, raw data, and user’s guide are available on the NEA website.

Filed under: Advocacy — Tags: Government Funding for the Arts and Humanities, Government Leadership —