The Corning Museum of Glass in Corning, New York, has received a one-time grant of $50,000 from the Henry Luce Fund in American Art to research and digitize part of its American glass collection.

The Harvard Art Museums in Cambridge, Massachusetts, has joined the Google Cultural Institute and contributed 1,061 high-resolution images of works of art from its collection to the institute. 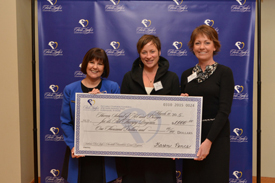 From left: Karen Pence, Juliet King, and Kim Hodges during a reception at the Governor’s residence (photography provided by the Indiana First Lady’s Charitable Foundation)

The Herron School of Art and Design, part of Indiana University–Purdue University Indianapolis, has accepted a $1,000 grant from the Indiana First Lady’s Charitable Fund. The award will support the school’s graduate program in art therapy.

The Metropolitan Museum of Art in New York has launched a new online video series, called The Artist Project. The museum will produce a season of clips in which one hundred artists respond to the permanent collection, choosing either a single work or galleries that spark their imagination.

The Philadelphia Museum of Art in Pennsylvania has accepted a three-year grant of $1,500,000 from the Henry Luce Fund in American Art to help reinstall and reinterpret its American art collection.

The Society of Architectural Historians, based in Chicago, Illinois, has received a three-year $150,000 grant from the Richard H. Driehaus Foundation for general operating support.

The Society of Architectural Historians, based in Chicago, Illinois, has been awarded a $20,000 grant from the Tawani Foundation to support activities related to the organization’s seventy-fifth anniversary.