“William Kentridge’s Project for the City of Rome” 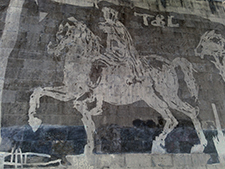 Rome’s Tiber embankments have been receiving an eye-catching mural makeover in the past few weeks, as a series of large-scale figures, up to ten meters in height, take shape as a century of pollution and biological patina is slowly power washed from the travertine walls. When William Kentridge’s 550-meter long mural, Triumphs and Laments: A Project for the City of Rome (2016), is complete and inaugurated on April 21, the mythical anniversary of the founding of Rome, it will constitute the South African artist’s largest public work to date.

Occupying the straightest stretch of urban riverfront between Ponte Sisto and Ponte Mazzini, the frieze will decorate a much-neglected space at the heart of the Eternal City. In fact, this reverse graffiti project is part of ongoing cultural programming by the organization Tevereterno, whose goal is to “revitalize Rome’s urban waterfront through the establishment and stewardship of Piazza Tevere, the first public space for contemporary art in Rome.” This international nonprofit initiative and multidisciplinary cultural project partners with the River//Cities Platform to create dialogue with other cities across Europe, America, and Asia about initiatives to develop rivers or waterfronts as cultural spaces. Speaking to a group of volunteers last month, Teverterno’s founder and artistic director Kristin Jones explained, “Everyone comes to Rome to take inspiration from the past, but who is caring for the present?” It was Jones who courted and convinced Kentridge to take on the Rome project. 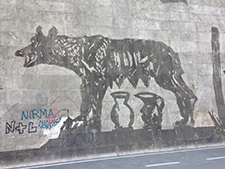 Since its founding in 2004, Tevereterno has orchestrated a series of artistic happenings along the riverfront, including pieces by Jenny Holzer and Barnaby Evans. Holzer’s Words of Love and War (2007) was a projection of texts by international poets and writers in English and Italian onto a series of Roman monuments, including the Piazza Tevere. WaterFire Roma (2012) by Evans featured thirty bonfires floating on the surface of the river as a conceptual reflection on the struggle between light and dark. As with many of the other events, WaterFire Roma was fashioned after a gesamtkunstwerk, combining visual spectacle with original music by Stag of Marco Guazzone and choreography by Linda Foster.

Kentridge’s drawings of the historical symbols and figures for Triumphs and Laments were first shown at the Italian Pavilion of the Venice Biennale in 2015. Ten workers have been laboring to stencil the eighty silhouettes onto the embankments over the course of the past month. The images evoke both the city’s two thousand-year history and a more universal story of our collective successes and failures as human beings. Even as the name and subject suggest the history of an ancient Roman triumph, or a celebration of victory against Carthage, Britannia, or Parthia along the Sacred Way, Kentridge’s parade of images critically conjures up the specters of conquest and the contradictions of civilization. Just as one nation’s victory demands another’s defeat, one person’s rise often hinges on another’s fall.

Kentridge’s works consistently address issues of social justice by making the personal political and visualizing states of mind, and, in this respect, Triumphs and Laments does not disappoint. Kentridge often returns to themes of estrangement, exile, and transience, all of which are explored in the Rome frieze. Working in a wide range of media, from prints and drawings to theater, tapestry, and sculpture, he is perhaps best known for creating animated films with a palimpsestic process of sketch and erasure. In 9 Drawings for Projection (1989–2003), short films that narrate changing lives in apartheid South Africa, the artist used images of human processions and running water as metaphors for the passage of time. While there are meanings inherent to each individual silhouette along the river, the larger elements of process and iconography resonate with the artist’s other works and add another layer of meaning to his “projection” onto the Tiber walls. 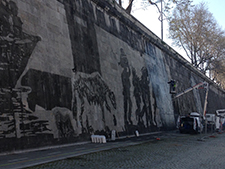 At work along the Tiber embankments

The fate of Kentridge’s frieze is to fade, like all things, under the patina of time, as the Tiber tides rise and fall year by year. This work, like the artist’s films, echoes the palimpsest that has been built, unbuilt, and rebuilt on the banks of the river over the centuries. Yet while the name and image of Rome resound through layers of history, this waterfront spectacle draws attention to the city’s cosmopolitan and contemporary art scene. What is truly lamentable is how the municipal administration of Rome frustrated and delayed such an innovative, creative contribution to the cityscape for so long; it took three years simply to obtain the necessary authorization.

In the run-up to the inauguration, Kentridge is in the city, hosted by the American Academy in Rome, inspecting the riverside work underway and giving a number of talks. He will be in conversation with Carolyn Christov-Bakargiev at the British School at Rome on April 15. Triumphs and Laments will play out as a kind of total work of art at the opening, which will premiere a theatrical program created in collaboration with the composer Philip Miller, and feature live shadow play and two processional brass bands.